The exploitation of Hawai‘i by the tourism industry 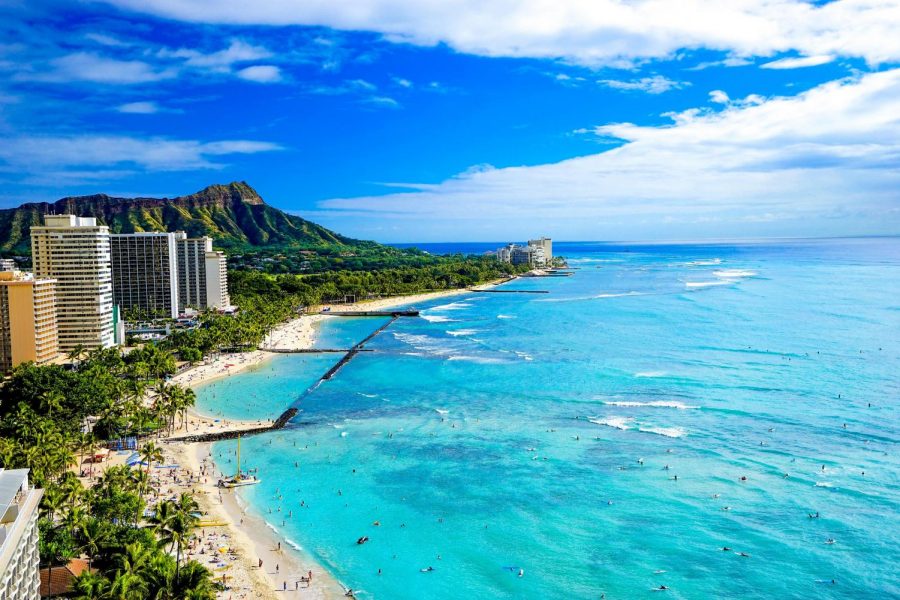 Luther students traveled to the island of Hawai‘i and Oahu in Hawai‘i to study multiculturalism in education during J-term of 2019.

In January, a group of Luther students embarked on a journey to analyze the ways in which multiculturalism has affected elementary, secondary, and higher education in the state of Hawai‘i — pronounced huh-wahy-ee or hah-vah-ee. During their studies, the J-term course members saw first-hand the impacts the tourism industry has on the islands.

Emeritus Professor of History Jacqueline Wilkie, who was one of the professors who taught on the J-term, believes tourism has a negative impact on the islands of Hawai‘i.

“One of the interesting things, for me, is the popular depiction of Hawai‘i as a place to be consumed, in ways we wouldn’t think about other places,” Wilkie said. “It does seem to me that tourism does not bring the notion that you owe something to the land, you’re only there temporarily, and it’s there for you to exploit and bastardize.”

Hawai‘i, named for the “Big Island” Hawai‘i, is a U.S. state made up of eight islands, and is the northernmost island group of Polynesia, located in the Pacific Ocean.

First contact between Hawai‘ians and Europeans took place when British explorer Capt. James Cook encountered the islands in 1778. American presence in the islands became dominant when the whaling industry became a lucrative business, and soon American settlers migrated to start sugarcane and pineapple plantations. East Asian laborers arrived to work these lands, and were absorbed into the island population.

The Kingdom of Hawai‘i was sovereign from 1810 until 1893 when the monarchy was overthrown by resident American and European capitalists and landholders. Hawai‘i was an independent republic from 1894 until August 12, 1898, when it officially became U.S. territory. Hawai‘i was admitted as a U.S. state on August 21, 1959.

According to the 2017 Annual Visitor Research report conducted by Hawai‘i Tourism Authority, 9,404,346 tourists visited the islands in 2017, and collectively spent $16.81 billion, breaking records for both visitation and expending.

The pressure of accommodating so many additional tourists has resulted in negative consequences for native animal and plant life. According to the Environmental Impact Report conducted by the International Center for Advanced Mediterranean Agronomic Studies, the development of infrastructure due to the tourism industry has been a major contributor to the environmental degradation crisis.

Between 1985 and 2010, the number of hotel rooms increased from 65,000 to 132,000, according to a report titled “Negative Impact of Tourism on Hawaii Natives and Environment” published in the Lethbridge Undergraduate Research Journal. Rev. Kaleo Patterson, a member of the Hawai‘i Ecumenical Coalition on Tourism and the Board of Directors of the North America Coordinating Centre of Responsible Tourism, sees an increase in the displacement of native Hawai‘ians and describes it in his book “All Is Not Well in ‘Paradise’.”

“There have been occasions when Hawai‘ian families and communities who have lived for generations in a valley or along a river are forced to leave because of a proposed golf course or hotel,” Patterson says in his book. “Recently this happened to families in Hana, Maui, a farming community in Maunawili and Waianae on Oahu.  It has been a common pattern that displaced Hawaiians on every island have found their way to remote beaches only to be forcibly evicted after a few years.”

An overuse of resources due to sustaining the tourism industry has critically wounded the island’s native wildlife. According to hawaii.gov, Hawai‘i comprises less than one percent of the United State’s land mass and contains 44 percent of the nation’s Endangered and Threatened plant species.

Tourist waste also inevitably makes its way to the ocean, where it pollutes the beaches and the water, and damages the local marine life populations. According to a May 2018 NPR article, the island of Maui recently passed a law that prohibited the sale of non reef-safe sunscreen because the coral reefs off the island have been decimated by the chemicals found within most UV protection products.

One effect on Hawai‘ian culture is the historical discrimination against the Hawai‘ian language. After the last reigning monarch of the Kingdom of Hawai‘i, Queen Lili`uokalani, was overthrown in 1896, the new provisional government banned the teaching of the Hawai‘ian language in schools and discouraged speaking the language at home. This ban was not lifted until 1986. According to the University of Hawai‘i Foundation, only 32 Hawai‘ian residents under the age of 18 could speak the Hawai’ian language by the time the ban was lifted.

According to an August 2018 NBC News article, a Chicago-based food chain attempted to trademark the words “Aloha” and “Poke,” which is a native Hawai‘ian cuisine consisting of raw fish seasoned with spices and served over rice. The restaurant sent out cease-and-desist letters to several native-owned restaurants, advising them to change their names or face a lawsuit.

Kaniela Ing, a Hawai‘ian state representative, addressed the issue in a video on Twitter.

“It’s bad enough that [aloha] has been used and commodified over time,” Ing said. “But this is the next level. To think that you have legal ownership over one of the most profound Hawai‘ian values — it’s just something else.”

One effect on Hawai‘ian culture is the sexualization and corruption of the hula, a religious and cultural dance that is practiced in Hawai‘i. Originally, the dance expressed the relationship between the people and the land. Its transition to a form of tourist entertainment changes the focus and intent of the dance.

Critic of the tourism industry Haunani Kay Trask describes how tourism has altered the hula in the article “Tourism and the Prostitution of Hawaiian Culture.”

“In the hotel version of the hula, the sacredness of the dance has completely evaporated while the athleticism and sexual expression have been packaged like ornaments,” Trask said. “The purpose is entertainment for profit rather than a joyful and truly Hawaiian celebration of human and divine nature.”

The tourism sector of Hawai‘i’s economy brings in approximately $16 billion each year, and that figure is rising. Many of the youth on the Hawai‘ian islands choose to focus on training for these tourism occupations rather than more conventional work.

“High schools and hotels adopt each other and funnel teenagers through major resorts for guided tours from kitchens to gardens to honeymoon suites in preparation for post-secondary jobs in the lowest-paid industry in the state,” Trask said. “In the meantime, tourist appreciation kits are distributed through the State Department of Education to all elementary schools. One film, unashamedly titled ‘What’s in it for Me?,’ was devised to convince locals that tourism is, as the newspapers never tire of saying, ‘the only game in town’.”

Meanwhile, wealthy off-islanders who want to have a summer or retreat home drive up the cost of residences on the islands. According to Hawai‘i News Now, the average single-family home price on Oahu has now reached $795,000, an astronomical sum unfeasible for people who work in the tourism industry. Thus, Hawai‘i is experiencing homelessness on an unprecedented level. According to the State of Hawai‘i Homeless Point-in-Time Count, there are now more than 7,000 homeless people in Hawai‘i — the highest per capita rate in the nation. About 5,000 of those people live on Honolulu.

Asha Aden (‘20) traveled to Hawai‘i during J-term of 2019 to study the effects of multiculturalism in schools.