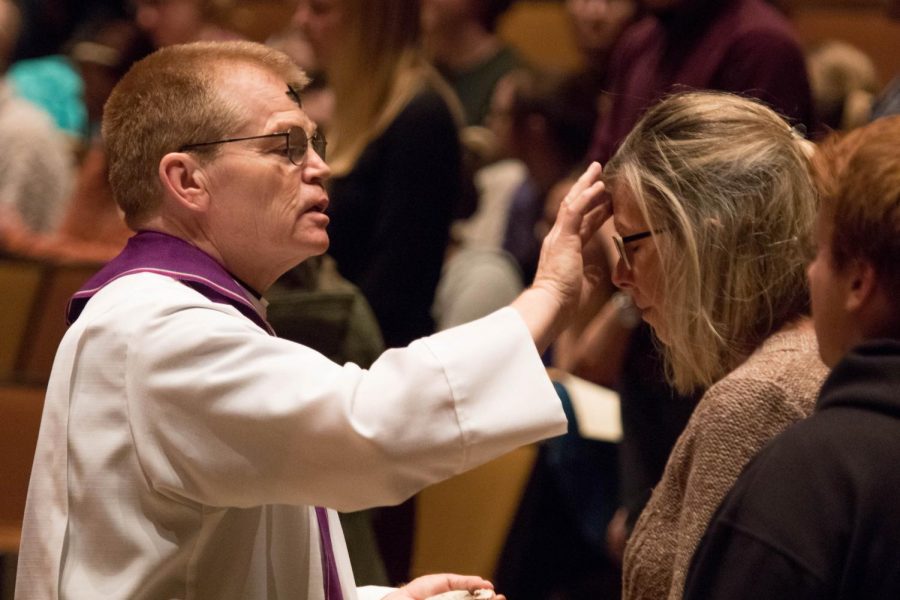 On Sept. 25, President Jenifer K. Ward and College Pastor Mike Blair announced that Blair will leave Luther after serving the college for 28 years to accept a call to serve as Chaplain at Bartels Lutheran Retirement Community in Waverly, Iowa. Blair’s official last day will be Dec. 8, following the final Christmas at Luther performance this year.

Blair completed his undergrad at Augustana College in Rock Island, Illinois. He then attended seminary at the Lutheran School of Theology in Chicago. He served as a college minister at Augustana College briefly before coming to Luther in 1991. While Blair did not take the decision to leave lightly, he looks forward to the new opportunities to serve.

“[The decision] was more of a process of listening than deciding,” Blair said. “Along the way it became clear that this was a new call. While there is energy and renewal in the call to serve at Bartels, it’s bittersweet to leave the Luther community and Decorah.”

According to Blair, traveling with Luther students has been a highlight of his career because they always represent the school well.

“In 2015 when I went to the ELCA Youth Gathering in Detroit, I was able to take a group of five students,” Blair said. “Colleagues from another school came to me and asked, ‘How did you get such a big staff team to come from Luther?’ And I said, ‘Well, I’m the only staff here right now.’ They were shocked, but that’s what Luther students do, they carry themselves like professionals.”

Another one of Blair’s most memorable moments occurred following a Wednesday night service in the Center for Faith and Life. Laser tag was popular on campus, and some students asked Blair to play a round with them in the CFL. As the game dwindled to its last few survivors, it ended abruptly when Blair ran into a campus security officer.

“I was one of the last ones in the game, and I was upstairs in the CFL balcony and could hear a group of students downstairs,” Blair said. “So I thought I could go downstairs and win the game. I ran down the stairs and I turned the corner thinking I was going to win, and it turned out I pulled my gun out on a campus security officer while wearing my pastoral collar and looking pretty dorky.”

College Pastor Anne Edison-Albright believes Blair’s ability to connect with students and other members of the community on a personal level has helped many individuals find their voice throughout his career.

“I think Pastor Mike has helped so many students, but also Luther as a whole to tell our stories,” Edison-Albright said. “He has that gift to listen deeply and to connect with people, and to bring a poem or a story or a song to the moment and have it be the right story for the moment.”

President of Congregational Council Elise Carlson (‘21) says that while she will miss Blair, his legacy will continue through College Ministries and the lives of those he has mentored during his time at Luther.

“When anyone leaves, especially someone who is as kind of a spirit as Pastor Mike, it’s obviously going to impact the community, because that’s been someone who’s been a strong mentor for people who will be dearly missed,” Carlson said. “The wisdom that Pastor Mike has put into College Ministries is not going to leave. The examples he has set for people and the leaders he has lifted up is not going to go away. That legacy is going to live on.”