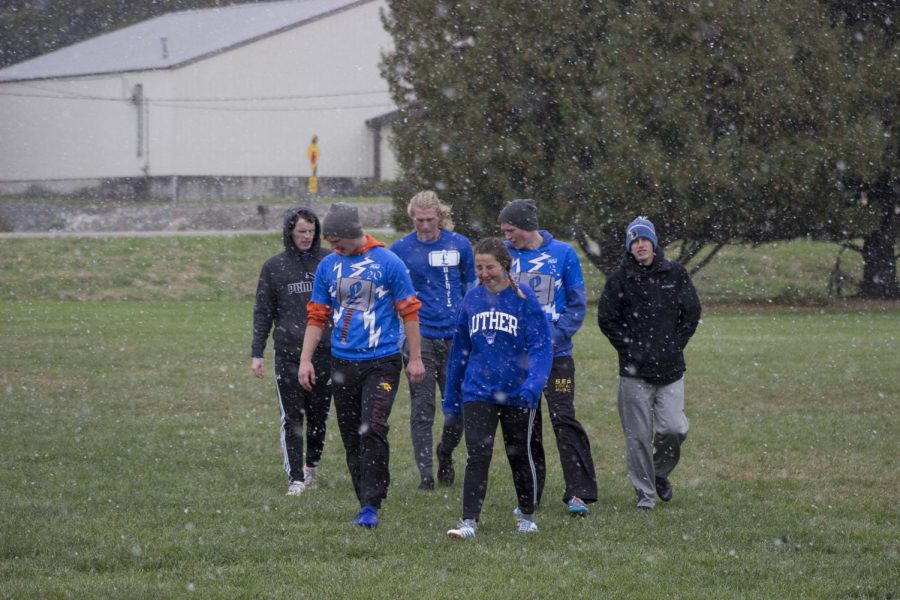 The Luther Invitational, a co-ed ultimate frisbee tournament, continued its history of bad weather as 16  teams from 14 schools braved the weekend’s snowstorm to participate in the event hosted annually by the Luther Ultimate Flying Disc Association.  Edina High School won the overall tournament, while LUFDA A took fifth.  LUFDA B took sixth, and Pound did not place.  Nick Lembezeder (‘20) won team MVP.

The three Luther teams that participated were not focused on winning as much as developing their team.  For their second tournament of the year, LUFDA has been more focused on training.  LUFDA Vice President and Team Captain Samuel Moyer (‘20) believes that this tournament is about gaining experience.

“It’s definitely a developmental tournament,” Moyer said. “This is all about getting everyone playing time.”

LUFDA and the other Luther Ultimate teams, Freya and Pound, have year-long seasons. The fall season is typically used for tryouts and training, where the spring season is more competitive.

“The fall season is more focused on development, but the spring season is the one that really matters,” Moyer said. “That’s like our regular season; that counts towards our points for rankings at the end of the year.”

Their postseason is in April and May where LUFDA will compete in their regional tournament in Blaine, MN, and possibly the national tournament at Texas A&M University in College Station, TX if they advance.

Their last event, the Exit 69 Tournament in Lakeville, MN, and this tournament, focused on getting their players up to form and giving their new players a chance to gain experience.

“We are a younger team this year, so it was good for us to get those younger guys a lot of playing time,” Moyer said, “We are going to have a deep team this year; that has always been our focus.”

The team faced adverse weather conditions at this tournament. Wind speeds hovered around 10 to 15 miles per hour, with gusts up around 20 miles per hour, bringing the temperature below freezing.Around noon, the snow began. Bobby Rudman (‘21), a player for Pound, did not appreciate the weather.

“Horizontal snow does not make for good frisbee weather,” Rudman said. “The wind was the big issue. It made it really hard to throw and also super difficult to read the path the disc was going to take.”

While the wind died down and the snow stopped on the second day of the tournament, that didn’t make the game much easier.

“Today was not the best,”   Rudman said. “There were some potholes in the field and spots without any grass. Those make it hard to stay on your feet.  I definitely had a fall or two.”

Rudman added that he preferred this year’s snow to last year’s rain.

“[Last year] it was insanely rainy, and the whole set of fields were just mud pits by the end of the tournament,” Rudman said. “People were sliding all over.”

Co-captain Marshall Chreech (‘20) is proud of his team’s success and believes that the depth of the roster will strengthen them in the future.

“I feel really good about the rest of the season,” Chreech said. “Last year, we made nationals and finished sixth in the nation, but we graduated a whole lot of our top guys.  It feels good to get a lot of new guys that are getting a lot better and [the team] is seeing a lot of improvement.”

LUFDA will play next at the “Missouri Loves Company” Tournament in Columbia, MO, Nov. 2-3.

The women’s Luther Invitational, hosted by Freya, will begin on Oct. 26.