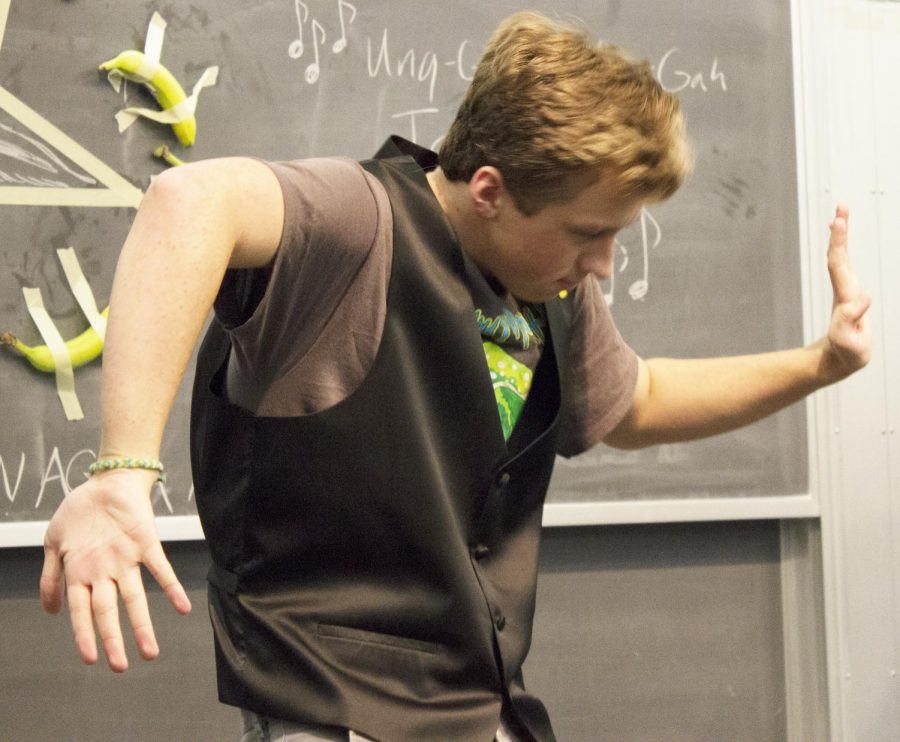 Gibby Swalley ('22) plays a mine during the Top Banana show.

Top Banana put on a variety show in Olin 102, on Oct. 25. this show was one in many shows the troupe plans to put on the semester.

The troupe, which was founded in 2010, puts on shows around campus and competes in regional improv tournaments. Many of the students in Top Banana use it to hone their acting abilities.

This year’s first performance had a Halloween theme, with Halloween song staples such as “Monster Mash” and “The Addams Family Theme” playing as the lecture hall filled nearly to capacity. A few members of the cast donned Halloween costumes, while most had a simple black vest with a banana pin. The smaller venue allowed the audience to get up close and personal with the performers.

After their introductions, the cast split to perform different improv ‘games.’ The games provide a level of structure to the improv and allow input from the audience. Top Banana practices to improve on their improv skills. Elizabeth Roby (‘22) talks about how there is more preparation in improv performances than people assume.

“People often don’t realize that you need to practice improv,” Roby said. “A major part of improv is working and listening to the other people in your scene. If everyone talks over each other in attempts to get the biggest laugh, it won’t work.”

The show started with the crew’s veteran performers worrying aloud about whether their former members had died, and what was needed to bring in new performers. Using the “Bananagram,” a scotch tape pentagram with a detailed drawing of a goat’s head in the center flanked by bananas taped to the chalkboard, they summoned their new cast members for the year.

The first game, “5, 4, 3, 2, 1” begins with five cast members performing a scene, then the audience votes off a cast member, and the remaining members perform the same scene. This continues until only one cast member remains, and they perform every character in the scene.

The premise chosen by the audience was a romantic moment atop the Eiffel Tower. The scene featured two roommates, originally played by Gibby Swalley (‘22) and Paul Adams (‘22), with visits from a friendly mime and parents, played originally by Sarah Damhof (‘22), Vincent Grube (‘21), and Jonathan Kuehner (‘20). Cast members were voted off until Adams remained to play every part.

The next game named “The Dating Game,” featured Adams playing the part of a bachelor on a 1950s style dating show. Adams asked questions to try and guess what famous characters the others were playing. The characters, which were recommended by the audience, were the book character Percy Jackson, played by Matthew Raihala (‘21), Scooby Doo, played by Clare Rolinger (‘22), and an impotent Attila the Hun, played by Ian Wreisner (‘22).

Michael Martin (‘20) enjoys the troupe’s rotation when it comes to the use of space. “I like the venue,” Martin said. “The size was fine, maybe a little limiting for Top B as far as open area in the front, but it still seemed to work fine for them. I like the fact that they rotate the venues they use.”

“Actors” is a game where two cast members are given scripts to stage shows and must only use dialogue from their scripts, and a third member is dropped between them and asked to improvise their dialogue. The audience decided on a bank heist for the setting, and the scriptless bank teller, Rolinger, eventually made off with the money, befuddling the would-be robbers, Roby and Swalley.

The show ended with a game played by the entire cast called “Our Town,” in which the audience was asked to create a unique name for a fictional town and each cast member took a role in the town, from the mayor to the local hairdresser. The cast members acted out a number of vignettes to tell a story about the town.

Suhr talked about how personal connection between actors is important to have successful shows. “As a troupe, we rehearse our stage chemistry and games or scenes similar to those we play at shows,” Suhr said. “We typically put on one show per month.”

Top Banana will continue to have performances throughout the upcoming school year.