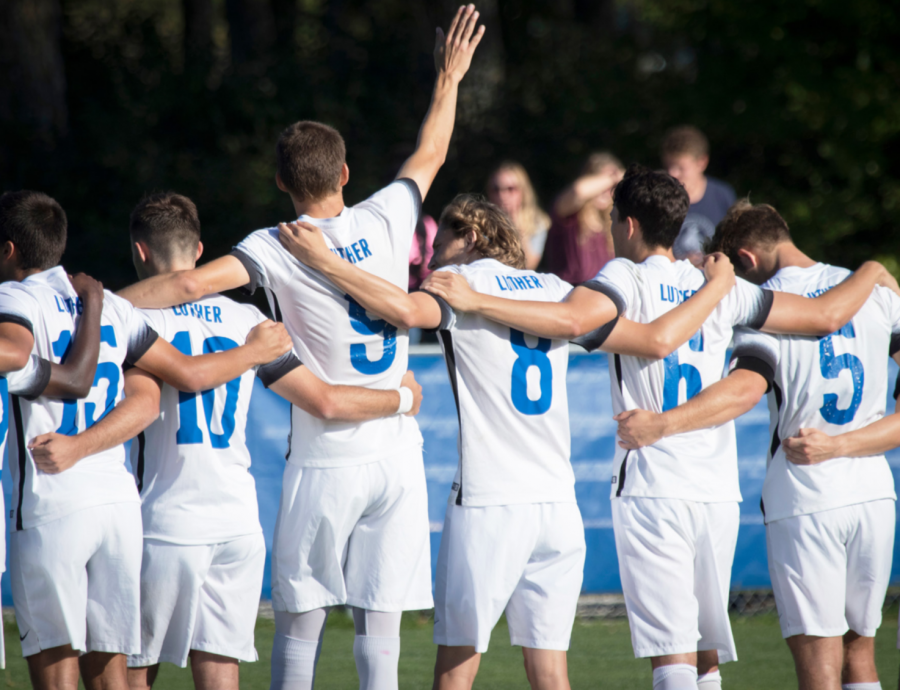 Both the Luther women’s and men’s soccer teams won their respective non-conference games against St. Olaf on Oct. 23 in Northfield, MN.

The women’s team secured a 1-0 victory over their opponent, which improved their overall record to 6-7-2. The men’s team walked away with a 3-0 triumph over the Oles, leaving Luther with an overall record of 12-3-1. The day at Rolf Mellby Field marked the final non-conference contest for both teams, who are now proceeding to their respective playoff matches.

The women’s team scored their only goal in the first half of the game. Midfielder Elizabeth DePrenger (‘20) shot from 35 yards out 33 minutes in. The ball managed to slip past the goalkeeper in the top right corner of the goal, securing a Norse win. DePrenger was assisted by defender Kaylee Waterhouse (‘23). This was DePrenger’s second goal of the season. The team’s keeper, Kennedy Bergren (‘21), recorded eight saves. In recognition of the team’s victory, the women’s team secured the prized traveling trophy of the aptly named “Uff Da Bowl,” a two foot tall garden gnome affectionately known as Olga.

Despite beating their opponents, some players felt that the match did not accurately represent the capabilities of the team. “We did win, which was good, but I don’t think we played as well as we normally do,” forward Hailey Sanchez (‘20) said. “It’s always hard to play a non conference game in the middle of conference season. I don’t want to say that we were not taking it as seriously, but it was harder to be focused. We haven’t played our best soccer yet, so it’s really good to keep improving as we go into playoffs.”

The men’s win gives them a final non-conference record of 8-1-1. The Norse scored once in the first half of the game and twice in the second. There were only two shots on goal by St. Olaf, both of which were blocked by goalkeeper Carson Davenport (‘21). Midfielder Joao Pedruzzi (‘22) scored the first goal of the game, which was also the first of his Luther soccer career.

“They didn’t have a chance [of winning],” Pedruzzi said of the St. Olaf team. “My goal was the highlight of my season so far. It was exciting because it was my first goal at Luther. I was talking with my friends before the game, I was telling them that I was waiting for the goal so much, so it was really great to get it then.”

During the second half, forward Ben Keller (‘20) scored his 11th goal of the season, assisted by Steven Johnson (‘21). Midfielder Benjamin Sizelove (‘20) scored the final goal, with the assist coming from Will Overberg (‘23). The victory was the sixth win for Luther in the previous seven matches. The game also continued a streak of shutouts for the Norse, becoming the third in a row for the team.

The team was pleased with how they performed. “We played pretty well actually,” defender Tim Maynard (‘20) said. “We got a couple goals in the first half, but usually two goals isn’t too safe, especially when dealing with our team, so we made sure we didn’t hold up at all, and got a third goal. Once we get to three, and keep other goals out, we can do well. We made it happen.”

Both teams followed their victories by beating Buena Vista University on Oct. 26. The women’s team won 4-0, continuing Luther’s undefeated streak against Buena Vista that stretches back 23 matches, while the men’s team won 6-0.

“Depending on what happens, we can finish strong,” Head Women’s Soccer Coach Russell Schouweiler (‘05) said. “It’s a really hard conference, but for the most part, we are going into the final matches higher than we were predicted to. After looking at everybody in our conference, I think they can win it. This is a national tournament level team, and I hope that that adversity, that hard schedule, those tough losses, pay dividends for us at the end of the year.”