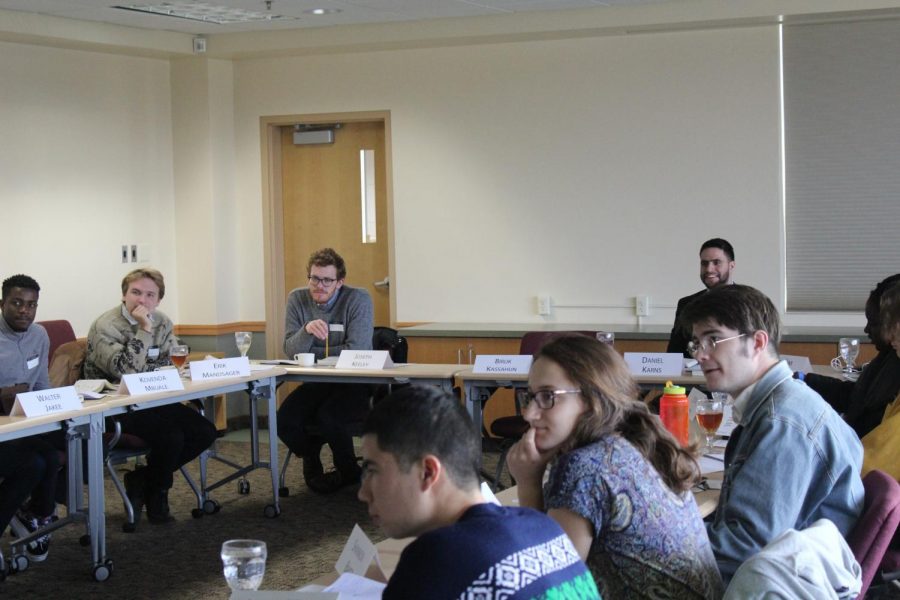 The Institute for Humane Studies at George Mason University sponsored a colloquium from 9:00 a.m. to 4:30 p.m. in the Mott room on Nov. 16. Students selected to participate in the colloquium discussed free markets, socialism, division of labor, the concept of liberty, and 18th century economist Adam Smith’s theory of political economy according to this year’s theme, “Capitalism and Socialism.”

The IHS is a libertarian, nonprofit organization that sponsors discussion colloquiums at colleges all over the United States as a part of their mission to support the discussion of classic liberal ideas, including topics such as “individual liberty and responsibility, limited government, economic freedom, the rule of law, free speech, and open inquiry,” according to their website.

“Part of our core belief is the idea that the academic institution should be a place where open inquiry flourishes and where students are allowed to challenge and engage ideas freely in an academic space,” Karns said. “Part of our program is to expose students to different ideas and allow them to engage in Socratic dialogue in order to have an experience of intellectual discovery where they can just wrestle with and challenge ideas and be able to learn from each other.”

Luther began its relationship with the IHS when Professor of Management Tim Schweizer contacted the organization a few years ago. Since then, Schweizer has coordinated four IHS colloquiums and chooses the overall subject of the event each year. Schweizer wanted to choose a different topic from previous colloquiums this year.

“We had done the ones on Markets and Morality the last two times, so I thought we should do something different,” Schweizer said. “The whole socialism and capitalism thing is really alive right now, so I thought this is perfect timing.”

Schweizer recruits at least 15 students to participate in the discussion who demonstrate intellectual engagement and a willingness to put time into preparing for these discussions. This year, students were expected to read selections from “What Adam Smith Knew: Moral Lessons on Capitalism from Its Greatest Champions and Fiercest Opponents” by James R. Otteson, “Anarchy, State, and Utopia” by Robert Nozick, “The Real Basis of Ideology” and “Introduction to a Critique of Political Economy” by Karl Marx.

“It has to be a student who’s going to be disciplined enough to do the readings,” Schweizer said. “They have to be someone who is really intellectually engaged. We would like it if each one was from a completely different major on campus. It’s completely interdisciplinary.”

In order to reach out to these students, Schweizer sends invitations to those he knows or who have participated in previous colloquiums and others recommended by the Center for Ethics and Public Engagement.

Despite the presence of moderator and Associate Professor of Economics at the Wilkes Honors College of Florida Atlantic University Keith Jakee at this event, students primarily led the discussions. Before the colloquium took place, Joseph Keeley (‘20) expressed his hope that Luther’s liberal arts approach to education would positively contribute to the discussion and allow students with diverse interests and knowledge bases to share ideas.

“I think there’s something about a liberal arts education that allows students to grapple with these texts in a really good way,” Keeley said. “It’s really easy on this campus to major in two different things that may not be in the same field. I think this is a good environment for it because you have all of these students with multifaceted interests coming together to discuss ideas like this.”

After the colloquium, participant Sean McKenzie (‘20) said he found other students’ willingness to challenge his beliefs useful.

“I had some challenges to my beliefs on markets and their role in society, so it was good to have that pushback,” McKenzie said.

Shannon Baker (‘20) believes that one of the useful aspects of discussion during the colloquium was placing more emphasis on implementing practical solutions to broader societal issues rather than relying solely on personal principles or theories to problem solve.

“I thought one of the more valuable things that we talked about was this reminder to take the idealistic and move it to the practical,” Baker said. “We talked a lot about how we have a lot of principles that are based on our individual beliefs, but, if we don’t figure out ways to move them to more practical applications, they’re worthless.”

Piper Wood (‘21) believes the diversity among student participants played a valuable role during the colloquium because it allowed others, particularly students from the United States, to engage with others who have more knowledge and experience with the way international corporations function outside of the U.S.

“One of the most beneficial things was having so many diverse viewpoints and experiences in the room,” Wood said. “Being able to talk about transnational corporations and to have some concrete examples from students from outside the United States that have experienced the effects or have a little bit more information on different ways in which corporations function outside of the [country]. I thought that was really beneficial and valuable to have those voices there.” 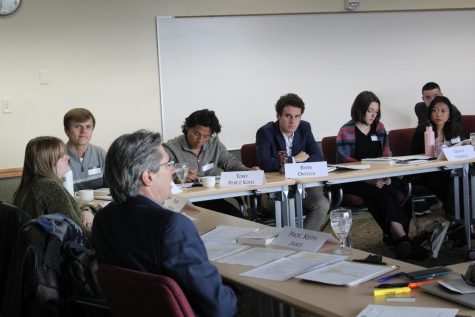