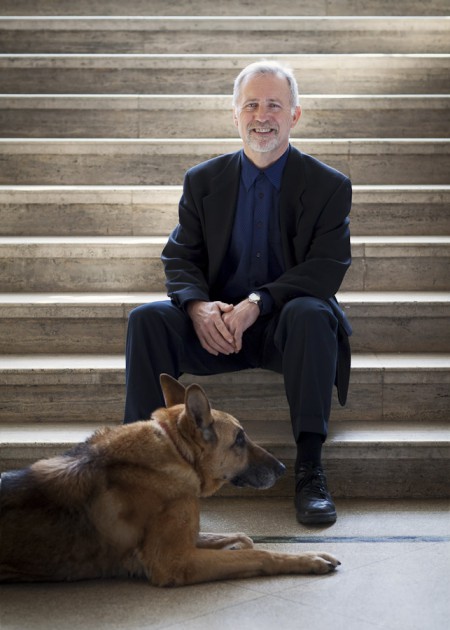 Leif E. Vaage poses with his German Shepard in a faculty photo for Emmanuel College of Victoria University in the University of Toronto.

Professor of New Testament at Emmanuel College of Victoria University in the University of Toronto and ELCA in Canada pastor Leif E. Vaage delivered a lecture that was part poetry reading and part sermon about his new book, “Metaphysical Athlete,” on Nov. 15 in Olin 102.

In his lecture, Vaage discussed the importance of poetry and its ability to convey life experiences and meaning. Vaage believes that poetry is more than its aesthetic qualities. Instead, he has a specific writing process that allows people to think beyond the material world.

“Poetry is not just versification,” Vaage said. “It’s not just making it sound pretty. It is the way you have to write if you’re going to think about something that is not just business as usual. [It’s] not just life within the bounds of humanity alone.”

“The word ‘metaphysical’ is being used in a particular way in this book,” Vaage said. “I’m using it in the sense of what is beyond us. Learning to think about that life that exceeds us. If all you know is the human world, you aren’t going to know what you most need to know.”

Vaage believes metaphysical poetry is a better equipped to describe the liminal space between the physical world and divinity in Biblical texts. He compares the practice of writing poetry to athletics because both are efforts to push limits beyond what seems humanly possible.

“Metaphysical writing, including poetry, inevitably is a lot like athletics,” Vaage said. “[It’s] an effort to exceed the customary limits of an earthbound existence. It’s repeatedly trying to jump a little bit higher than gravity normally allows.”

In addition to poetry’s ability to push the limits of human thought, Vaage says writing poetry was instrumental to his ability to understand and teach Biblical texts when it comes to topics such as Jesus’ resurrection.

“How do we talk about [the resurrection] in a way that is honest?” Vaage said. “I needed poetry, I found, to be able to think about that topic in a way that would be adequate.”

Vaage was invited to campus by Professor of Religion Wanda Deifelt, who is a longtime friend of Vaage’s. Deifelt took the opportunity to invite him to visit Luther when she learned Vaage was traveling from Canada to the United States to present his research.

“I learned that he and a couple of German friends would be driving from his home in Nova Scotia to San Diego, where Leif will present a paper about his research on biblical studies at the Society of Biblical Literature conference,” Deifelt said. “Since he would be driving through the Midwest, I invited him to visit Luther and [to] talk about his latest book.”

Deifelt believes Vaage’s work is meaningful because the symbolic nature of poetry lends itself to explorations of the divine.

“Religion requires poetry because the poetic language is symbolic,” Deifelt said. “[Poetry] allows religion to articulate that which cannot be fully grasped or explained. Metaphor and analogy serve to, at least partially, convey the mystery of the divine.”

Annelise Myers (‘20) found Vaage’s approach to channeling his academic knowledge in the form of poetry unique in comparison to the more traditional writing outlets many other professors turn to.

“I found [his lecture] interesting,” Myers said. “Not just because of his argument on metaphysics, but also, I found it interesting to think about him as a someone who, instead of doing additional research or writing a textbook like a lot of professors do, [writes] poetry as a way to continue his education.”

In addition to teaching at Emmanuel College and writing, Vaage also teaches at the Toronto School of Theology and the Universidad Bíblica Latinoamericana Recinto Lima in Perú. His research interests include Latin American practices of interpreting the Bible, early social projects associated with Jesus’ first followers, and the significance of the human body in Christian worship practices and projects. 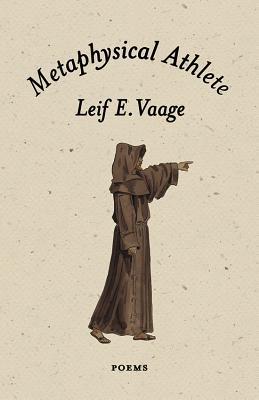