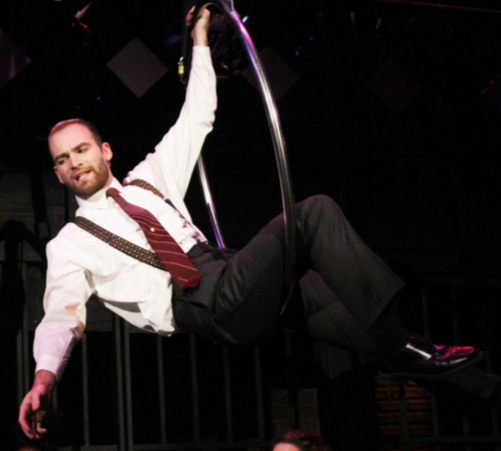 Trevor Haren ('21) swings across the stage as he plays Billy Flynn.

On Nov. 15 and 16, Jewel Theater opened its doors to an audience eager to see the theatrical production “Chicago,” based on the book by Fred Ebb and Bob Fosse, with music by John Kander and lyrics by Ebb. The show was directed by Associate Professor of Theater Robert Vrtis, choreographed by Professor of Dance Jane Hawley, and featured music directed by Instructor in Music Mark Potvin.

“Chicago” was chosen because the Paideia theme of Resistance and Resilience. The play explores this theme in a manner, which drew the attention of the Visual and Performing Arts committee.

The characters in the show must be able to find ways to thrive in jail and acquire sympathy from the media so they can be exonerated for their crimes. Garret Baumler (‘20), who plays the defense attorney Aaron, believes that the time period in which the show is set creates a good foundation for exploring the Paideia theme.

“This idea of resistance and revelations is set in the 1920s, in a time when prohibition is going on,” Baumler said. “There’s this impression of a moral high ground that everybody needs to be like “Chicago” is an antithesis to the moral high ground.”

The show tells the story of two women named Roxie Hart and Velma Kelly who must make an image for themselves to be saved from the death penalty  are both in prison for being accused of murder and Roxie, a new inmate, hires defense lawyer, Billy Flynn, to make sure she does not receive the death penalty. She begins to gain a lot of attention from the media, who cover every aspect of her trial.

While awaiting her trial date, she meets Velma Kelly, who was accused of murdering her husband. Velma was formerly in the limelight until Roxie stepped into the picture. Now, Velma must struggle for attention from the media and her lawyer, Billy Flynn.

“I think getting to experience it first-hand, you get to see all the different elements and how they all cohere and how one can’t exist without the other,” Baumler said. The dance and the music have to be one otherwise it just doesn’t work very well.”

Rehearsals for the show started the third week of classes. Potvin began teaching the music to the pit orchestra. Gradually, rehearsals added in to dance rehearsals.

Josie Ramler (‘23) says that the performance was quite impressive.