Luther men’s soccer advances to the Round of 16 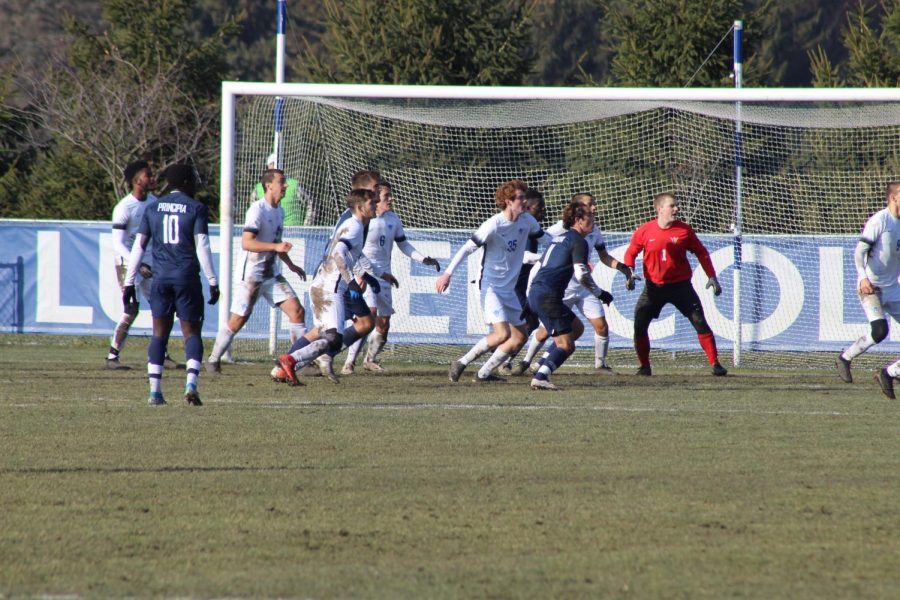 On Nov. 16 and 17, the Luther men’s soccer team competed at home in the first and second round of the NCAA DIII Men’s Soccer Championships.  On Nov. 16, Luther beat Principia College 5-1.   The next day, Luther beat the University of Wisconsin-Superior in a shootout victory to continue on in the tournament.

Against Principia, Ben Keller (‘20) was the top scorer of the game and recorded two goals to help put the game away.   Luther took a total of seven shots on goal.  The next day, Will Overberg (‘23) scored the first goal of the game at 22:13, but UW-Superior tied the game up at 87 minutes.  Due to a red card, Luther played the second half with only ten players.  The game was tied 1-1 after two overtime periods and a shootout.

Harry Merz (‘20) scored the game-winning goal in the shootout, while Carson Davenport (‘21) stopped two shots in the shootout period alone.   Luther won the shootout 4-1 and advanced to the Round of 16 in the national tournament.  Luther will play Ohio Wesleyan in Chicago on Nov. 22 at 1:00 p.m.

Last year, the team made it to the Elite Eight in the national tournament. Many of the players on the team this year had experience in the tournament from years past.

“This year, we have a lot of guys who were obviously on the team last year and had playing time in those playoff games,” Logan Morrison (‘20) said.  “So we’re really just focused on ourselves for the games ahead. We don’t think that we’ve played the best that we can play so far this year, so we’re hoping that all the pieces fall together on Saturday.”

Morrison believes that the team’s depth and experience will lead to further success.

“We kind of know what to expect,” Morrison said. “A lot of our seniors have won four trophies in four years now and I think our experience in the national tournament is definitely going to pay off.  We’re just doing everything that we’ve been doing all year we haven’t changed our practices or anything that we do in practice, we’re just focusing on ourselves.  We’re not changing who we are to find success.”

Preparation and practices for the tournament were similar to that of regular season games. One difference in the practice environment has been the dramatic change in the weather in Decorah over the last couple of weeks.  Practicing in the cold and snow has been an everyday occurrence this past week for the team. Though Luther would like to make it as far as possible in the tournament, the men’s soccer team says that they value memories and team comradery more.

“Our coach talked about it yesterday, as we were training in four inches of snow, the importance of keeping the guys together to create memories that we can have for the rest of our lives,” John Curran (‘21) said.  “That practice was probably one of the most memorable practices here and probably my career.  Just being around and practicing in the snow with basically your brothers is really fun.”

Just like the practices, the conditions for the games weren’t ideal.  Most of the field had turned to mud by the end of the first half of the first game. This caused a noticeable change in playing style.

Despite the conditions, there was plenty of support for Luther on the sidelines, with students, staff, and alumni alike gathered around the field. Several Decorah community members also showed up to support the team.

“I think the home court advantage is a big deal, and also there’s a bunch of people out here, which is super cool,” Larsen/Olson Hall area coordinator Christopher Lovagnini (‘16) said. “I’ve been talking to alumni on the fence, and there’s a lot of support out here, so I think that helps the team a lot.”