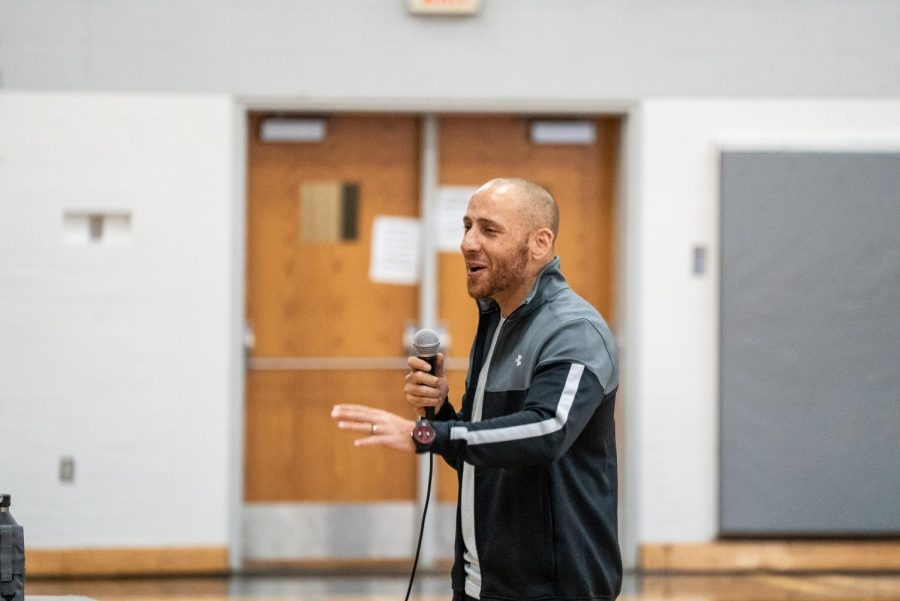 TRIGGER WARNING: This article contains discussions of suicide that may not be suitable for all readers.

In 2000, suicide prevention advocate Kevin Hines jumped off the Golden Gate Bridge. Of the 1,700 people who have jumped since the bridge opened in 1937, he is one of just 36 people to survive. Nineteen years later, Hines gave his “#BeHereTomorrow” lecture in the Regents Center Main Gym on Nov. 19. The Center for Ethics and Public Engagement, Active Minds, and Counseling Service sponsored the event.

The #BeHereTomorrow hashtag is part of Hines’ suicide prevention efforts, which he promotes through his book, “Cracked Not Broken: Surviving and Thriving After A Suicide Attempt,” his film, “Suicide: The Ripple Effect,” and his speaking engagements. Hines is among a number of activists whose advocacy efforts have resulted in the construction of a net under the Golden Gate Bridge, which will be completed in 2021.

Before speaking about his life, Hines asked the audience to participate in a moment of silence to honor those who have lost their lives to suicide. Instead of focusing on the day or manner of their deaths, Hines requested that attendees remember these individuals for the way they lived.

“In my short 38 years on this beautiful planet, I’ve now lost 10 people I love this way, the last of which was three weeks ago,” Hines said. “But my new friends, today is not about the way they died or the day they died. Today is about how they lived. Today is about the beauty that they were and the light that exuded from them when they were still here.”

Afterwards, Hines shared the story of his own suicide attempt and subsequent years of recovery. At the age of 17, Hines was diagnosed with bipolar I disorder, a mental illness characterized by fluctuating manic and depressive episodes that can last for weeks or months at a time. Over the following few years, Hines had a difficult time managing his symptoms and did not seek help because he believed that only death would bring him relief.

“As a teenager, I struggled to accept my mental illness diagnosis,” Hines said. “After a few years of battling my suicidal thoughts and paranoid delusions, I thought the only way to make the pain end was to die using my own two hands.”

Hines realized he wanted to live as he fell 220 feet from the bridge towards the San Francisco Bay.

“When my hands left the rail, it was an instant regret from my actions and the thought that I had just made the biggest mistake of my life,” Hines said.

Hines maneuvered himself midair so his legs hit the water first and shattered two of his vertebrae. A sea lion approached and kept him afloat before the Coast Guard came to assist him.

In the years after his attempt, Hines became more devoted to maintaining his mental health.

“I was in multiple psych wards in the 11 years after my attempt, but it wasn’t until the third stay in a psychiatric unit that I became self-aware,” Hines said. “I realized that if I wanted things to change, I had to do something about it, and I needed to take control of my own wellness.”

Hines stresses that his recovery was the result of learning to manage his symptoms and asking loved ones and mental health professionals for assistance.

“I still have every symptom of my illness today, I have just learned to manage them and always ask for help if I feel suicidal,” Hines said. “I am lucky to travel the world sharing a message of hope and healing because I have the support of my family, friends and amazing wife, Margaret. Without their guidance and love, I wouldn’t be where I am today.”

Counseling Services outreach assistant and Luther College Active Minds member Hannah Wollack (‘20) had seen Hines speak in the past and thought his story would be valuable for Luther students, staff, and faculty to hear.

“[I] saw him previously speak and thought he was a great speaker and that he would help this campus,” Wollock said. “I think the most important part [was] when he asked those who were having a hard time or were struggling to stand up. Then he looked at them and explained why they should still be here.”

Director of Counseling Services Meg Hammes says many members of the Luther and Decorah community have responded positively to Hines’ lecture and other resources he offered for local schools during his visit.

“I am not sure how to measure the impact of Kevin’s visit on our community, only to say we have heard gratitude an appreciation from many students, staff, faculty,  and community members for his work in the [area],” Hammes said. “While he was here, he was also able to speak at Decorah Middle School and provide a teacher in-service at the high school.”

Hammes also says there are multiple ways people on campus can seek assistance for themselves and others when they experience suicidal thoughts.

“If you know someone who is suffering, ask them if they are having thoughts about ending their lives, if they say yes, do not leave them alone,” Hammes said. “Contact an RA, HD,  or Safety and Security. Be willing to listen without judgement, shock or being dismissive. Check in with them and follow up days and weeks following any sort [of] mental health crisis. Do not be sworn to secrecy. You must let parents, staff, or loved ones know your concerns. Contact counseling services regarding Question, Persuade, Refer training offered on campus.”

In addition to these resources, students can utilize Counseling Services, whose licensed staff of mental health professionals are available on Monday through Friday from 8:00 a.m. to 11:45 a.m. and 1:00 p.m. to 4:30 p.m. Students interested in participating in mental health advocacy on campus can attend Active Minds meetings every Tuesday evening at 7:00 p.m. in the Hovde room in Preus Library.