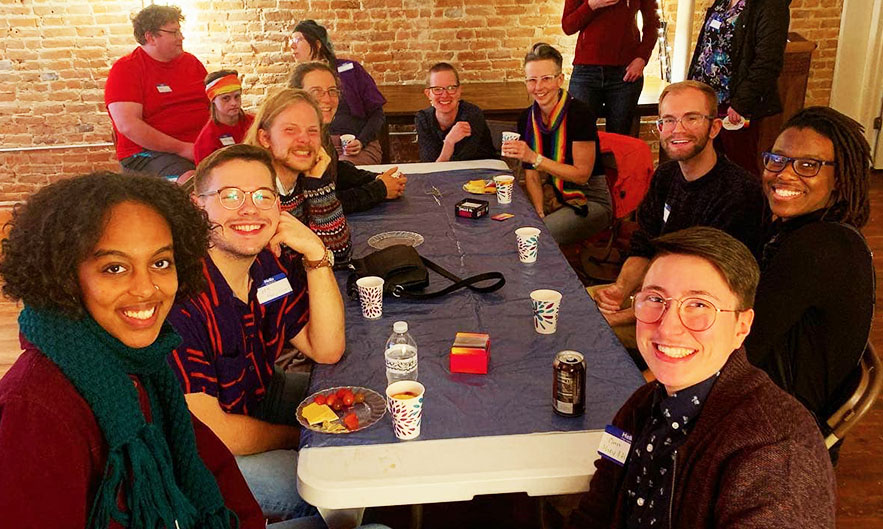 Attendees socialize and eat snacks at the meet and greet.

The Northeast Iowa Peace and Justice Center  and Luther College’s People for the Rights and Inclusion of Diversity and Expression  hosted a Northeast Iowa Queer Meet and Greet at the Lingonberry in downtown Decorah on Nov. 23. LGBTQ+ community members and their allies were invited to socialize, eat, and play card games alongside members of Luther PRIDE and the NEIPJC. Around 30 people attended the event.

The NEIPJC is a nonprofit, nonpartisan, interfaith organization for counties in northeast Iowa that promotes “peaceful conflict resolution, compassion and social justice, human rights, interfaith cooperation, and sustainable environmental justice.” Director of the NEIPJC Sharlene Bohr (‘98) explained that the organization’s decision to host the meet and greet was a way to strengthen the connections within the northeast Iowa community.

“I wanted to position the organization as a connector to the broader community of northeast Iowa,” Bohr said. “That is why Peace and Justice has partnered up with Luther PRIDE: to bring an opportunity to northeast Iowa to allow for connection between communities.”

Bohr wants all of the NEIPJC’s events to involve an “actionable to-do,” meaning that each will accomplish a specific goal that relates to the organization’s mission. The goal for the meet and greet was to foster connections between LGBTQ+ people in a small town where people do not have as much access to a larger LGBTQ+ community.

“We’re super rural here in northeast Iowa,” Bohr said. “The point is to create a space for access in our rural region.”

Kelly Rebmann (‘23) appreciated the opportunity to meet other members of the LGBTQ+ community at the event.

“Since Decorah is pretty small, I find that I don’t really know many other queer people in the area,” Rebmann said. “And if I do, we stick to ourselves and we don’t really get to branch out and meet others.”

Luther’s PRIDE organization’s goals are to support members of the LGBTQ+ community, promote equality for those of all sexual orientations and gender identities and expressions, and to push for political change.

President of PRIDE Lauren Westbrook (‘22), helped organize the event along with Bohr. She reached out to the NEIPJC about hosting the event after learning that some members of the LGBTQ+ community at Luther and in Decorah had experienced feelings of isolation.

Westbrook hoped that the event would create friendship and reduce isolation among the LGBTQ+ community in northeast Iowa.

“We have had social events where I have seen people become friends,” Westbrook said. “I am hoping to see the same thing. I am hoping there will be meaningful relationships within and outside of the community. I also hope this will help with identifying important people within the community.”

PRIDE executive board member Samantha Douglas (‘21) also shared her goals for the meet and greet. She wants PRIDE to work on events that extend outside of their work on campus.

Vice President of PRIDE Meretta Hanson (‘20) advocates for increasing the visibility of the LGBTQ+ community. She also highlighted the newness of the initiative to reach out to the Decorah area.

“The main goal is to show that LGBT people exist throughout the world, not just on college campuses, but also in the community,” Hanson said. “Along with that, it’s a big networking opportunity. So, not only seeing that LGBT people exist but also talking to them and hearing life stories and sharing experiences with each other. This is one of the first major advertised events involving both the community and PRIDE, although we do march in the homecoming parade.”

PRIDE meets weekly at 8 p.m. Their most recent meeting concerned the Transgender Day of Rememberence on the Nov. 20. PRIDE honored this day with a demonstration in the union and joint vigil with campus ministries. According to Westbrook, PRIDE is also working on a project called We All Bleed Blue. This is a series of events that goes on throughout the semester which supports students in performing arts and sports.

Other upcoming events include PRIDE’s plans to attend the Midwest Bisexual Lesbian Gay College Conference and their organization of “What I Wish I Could Have Told My Teacher” in March and Health Week in February. 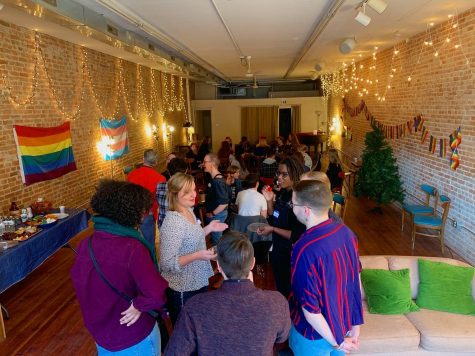