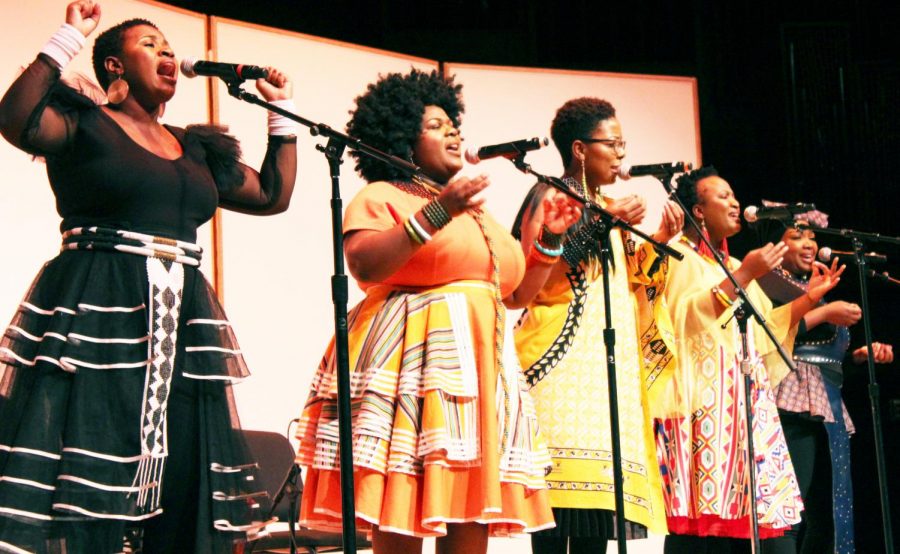 Nobuntu teaches the audience how to click while they perform a song.

On Friday, Nov. 23, Nobuntu put on the last Center Stage Series performance that also brought an end to their two-and-a-half month U.S. tour.

Nobuntu is an all-female a capella group from Zimbabwe. The name of the group is taken from the Zimbabwean concept that values humility, love, purpose, unity, and family from a woman’s perspective. Nobuntu performs a genre of South African vocal music called mbube and is the first all-female group to perform in this genre.

In Zimbabwe, there are sixteen different languages spoken, each which have many dialects. Between the five members of Nobuntu, seven of those languages are spoken. The songs were in a few of those seven languages. A big part of the culture and music in Zimbabwe is dance. The members of Nobuntu used the art of dance in their repertoire to express depression, victory, and  courage which had the audience cheering. Introducing students and the Decorah community to aspects of cultures from all over the world is an important part of the Luther College mission statement.

One notable group that performs mbube music is Ladysmith Black Mambazo. Member of Nobuntu Zanele Manhenga says the group was motivated to be the first all-female group to perform Mbube.

“Mbube has always been done by men. You see many famous all male groups that do mbube,” said Manhenga. “That’s all that the world had seen until we decided seven years ago to become the first girls that do mbube.”

Director of Campus programming Kristen Underwood believes that the group harnesses values that are relevant in our world today.

“It is their belief that music is the most important and original wheel of change that transcends racial, tribal, religious, gender and economic boundaries,” Underwood said.

Nobuntu’s songs are based on topics of abuse and social expectations of women in Zimbabwe and in other parts of Africa. The creation of the group was based on redefining the odds and social boundaries for women in Zimbabwe. The messages within the repertoire of the ensemble had an emotional impact on many of the audience members throughout the performance.

Elliot Rickert (‘21) believes that the performance spoke to Nobuntu’s experiences and beliefs.

“It was clear that where they came from, and their life experiences in general influenced their musical choices,” Rickert said. “You could see how much the songs meant to them when they got really emotional during multiple of them.”

Audience members were inspired by the messages of empowerment expressed by Nobuntu. Rickert expressed his admiration for the group’s enthusiasm to follow their dreams.

“I think the most inspiring thing for me was just the fact that they were a group of really talented women who knew what they wanted to do. So, they set out and did it.” Rickert said.

The CFL was filled with both Luther students and Decorah community members. Members of the ensemble interacted with the audience between almost every song; an audience favorite was a lesson on “clicking.” Clicking is a sound used in multiple languages spoken in Zimbabwe.

After the performance, the ensemble held an autograph, picture, and discussion table for members of the community.