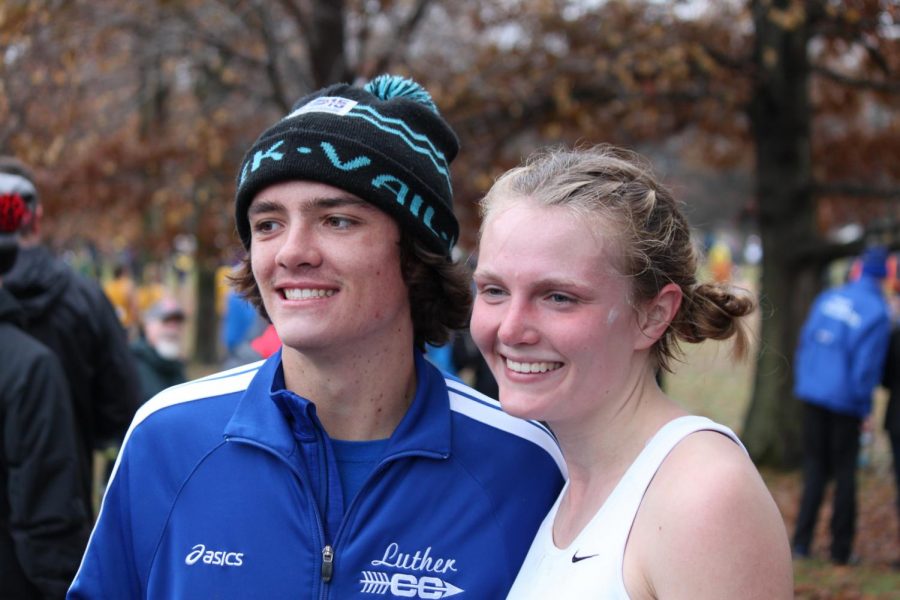 Kelly and Lindhorst both felt supported by their teammates.

“I didn’t think the nationals race went as well for me as I would have liked,” Lindhorst said. “I didn’t know going into it exactly what to expect; they literally sprinted off that line. I was in dead last for a couple of minutes. I think in hindsight, the way that we do Luther races is patient start, and that’s just what I had in my mind going into it—patient start. At the same time if you patiently start and you are in last place, you have like 300 people to climb up through, and I just spent the whole race weaving in and out trying to get ahead.”

Kelly had similar feelings about the race, but still felt supported by the team.

“It was okay, not great… I think I could have raced better,” Kelly said. “I think I went out a little too hard. But overall, I feel okay with it. I definitely have room to improve, and I am really looking forward to the years to come. My parents came out, and there were some supporters that came out, and the team was streaming the race back home and I knew that, so I went out and raced knowing that.”

Assistant Cross Country Coach Scott Mittman (‘14) was proud of the way Lindhorst and Kelly represented Luther, especially because of the deep field at the national meet.  Mittman believes that the lack of Luther runners surrounding them had an impact on the race.

“The individuals we had represented the team really well,” Mittman said. “Ian and Vera were awesome representatives of men and women.  But on top of this new race for both of them, and the deeper field, they had to do it by themselves.  They aren’t surrounded by a team, and it’s hard, but I think they both did admirably.”

Despite having a disappointing final race, Lindhorst was happy with the way the season turned out for both her and the team.

“It was the best season I have ever had,” Lindhorst said. “This was kind of a breakthrough season for me, and I just did really well. I think I [got a personal record] every meet, except conference. I think my four years of training finally clicked. So for me it was just an awesome season, so exciting. I never went to state in high school, so to qualify for nationals my senior year and have that be the way that I finish out my collegiate running career is really cool.”

These races bring the cross country season to a close, and many of the athletes will begin training for the Indoor Track & Field season starting in the next few weeks. The first indoor Track & Field meet will take place on January 18, 2020 at the St. Mary’s Early Birdinal, hosted by St. Mary’s University in Winona, Minnesota.