Hope Over Hate: Judy Shepard on her son Matthew, his life, and his legacy 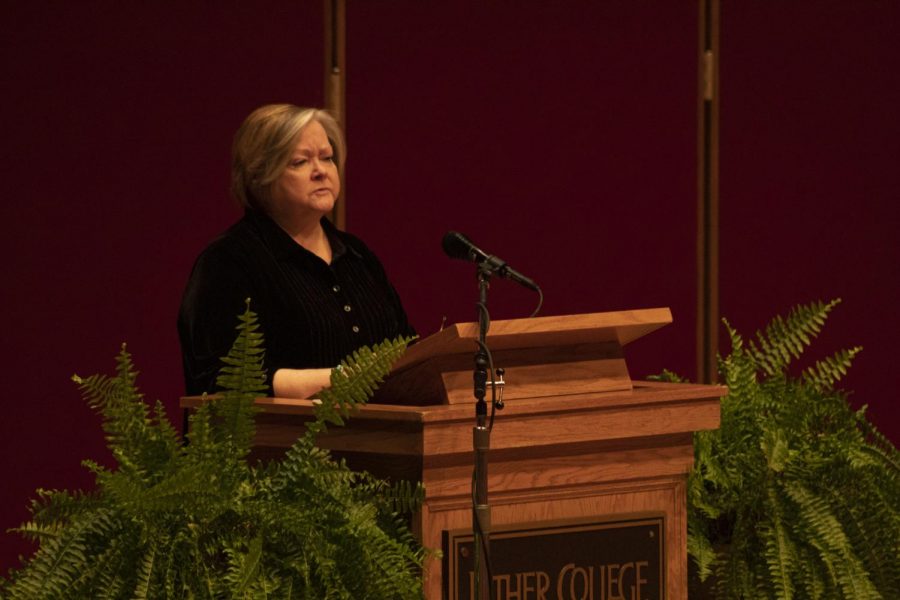 Judy Shepard reads her victim impact statement from court to the audience.

Judy Shepard presented the Hope Over Hate Distinguished Lecture, “The Legacy of Matthew Shepard,” on Mar. 3 in the CFL Main Hall. Shepard is the mother of Matthew Shepard, a young man who was murdered because of homophobic prejudice.

On Oct. 6, 1998, Matthew Shepard was approached by two men, Aaron McKinney and Russell Henderson, who offered to give him a ride home. After driving to a rural area, they robbed, pistol-whipped, and tortured Shepard.

When they were done, they tied him to a fence post and left him to die. Matthew Shepard was discovered 18 hours later, and he had fallen into a coma. He died six days later at the age of 21.

During the lecture, Judy Shepard read her victim impact statement she used in court during the sentencing of one of the murderers. She spoke about how her son grew up, his life, and his personality. She described his passion for gay rights, his smile, how much he loved his family, and how much his family loved him. She also spoke of the hole that his loss left in their family.

After Matthew’s murder, Judy Shepard launched an organization called The Matthew Shepard Foundation. The foundation is committed to advancing social justice, diversity awareness and education, and equality for lesbian, gay, bisexual, and transgender people. Judy Shepard prefers to refer to LGBTQ people as SOGI, or Sexual Orientation and Gender Identity, because she believes the term is more inclusive.

Director of Campus Programming Kristen Underwood believes that there has been vital changes in the public view of homophobic hate crimes since Matthew’s death.

“I remember exactly where I was when the news broke about Matthew Shepard’s death, but that was 22 years ago now,” Underwood said. “A lot has changed since then. It’s important for students, for everyone, to understand where we’ve come from, so we can truly appreciate change and take action when we see it sliding backwards.”

Professor of History Victoria Christman says that while this isn’t her area of expertise, she knows that the country was gripped by Matthew’s story when it happened. The news coverage gave Judy Shepard a platform from which to launch her organization.

“I remember the extensive news coverage it received and the conversations it sparked,” Christman said.

“Something about the sheer injustice of it really struck a chord with people. One of the most significant accomplishments of their work through the Matthew Shepard Foundation was the creation of hate crimes laws for crimes involving LGBTQ+ victims. When Matthew was murdered in 1998, his death was not considered a hate crime. Now it would be, and that is largely due to the tireless activism of his parents.”

Underwood was moved by the lecture, and believes it was a powerful message for anyone interested in social activism and making change in the world.

“I loved her sense of humor, and how she didn’t seem to have a lot of time for mincing words or covering her true feelings with niceties,” Underwood said. “The most moving moment for me came the day after the lecture, when she responded to someone’s ‘you’re so brave!’ with “I’m not brave. I’m just a pissed off mom.’ There’s so much power in that, and that power has led to extraordinary changes for the good.”

The day after the lecture, Judy Shepard met with Nordic Choir members to talk about a choral piece about Matthew, “Considering Matthew Shepard.” The piece is a

100-minute oratorio that was composed in 2016 by Craig Hella Johnson. Nordic Choir performed songs from the piece during their J-break tour, and will be performing the full piece later this spring.

Justin Knautz (‘21), a member of Nordic Choir, attended the lecture and the Q&A session the next day. He believes that Shepard’s message was all the more powerful because of her onstage presence.

“I was surprised by her presence,” Knautz said. “She said she wasn’t a public speaker, and she’s really not, but she has a presence about her that makes the stories she tells really impactful because she’s so genuine about it. I got a sense that she was doing this because she had a message and wanted to make a difference, that she was doing it for the right reasons.”

Megan Ferguson (‘21) connected to the lecture on a personal level, as her dad is gay.