Hope Over Hate: Pedro Lopez Vega (’17) on the Postville raids and resiliency 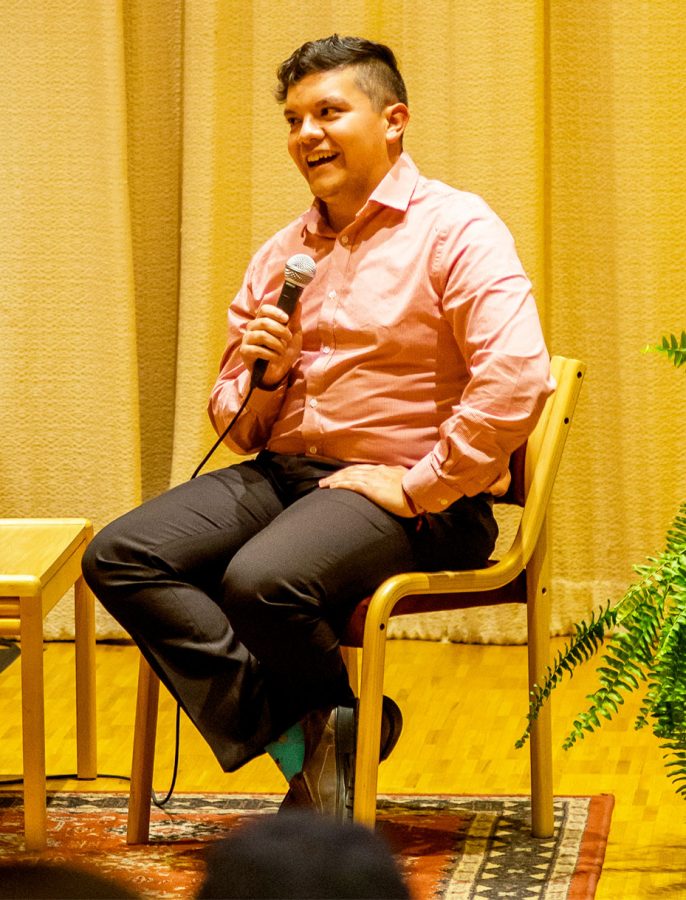 Almost 12 years ago, the life of Pedro Lopez Vega (‘17) and his family took a sudden turn when 900 Immigration Customs and Enforcement agents arrested 389 immigrants in Postville, Iowa. Vega’s mother was one of the immigrants arrested. Five years later, he began studying at Luther and graduated in 2017 with a degree in Political Science and International Studies.

On Mar. 5, Vega shared his story in the CFL Recital Hall as part of the Hope Over Hate Distinguished Lecture Series sponsored by Campus Programming and the Center for Ethics and Public Engagement.

Born in Fresnillo Zacatecas, Mexico, Vega and his family migrated to Postville in 1997. On May 12, 2008, Vega was in his middle school when he and his classmates noticed helicopters outside. This was not a normal occurrence in the small, rural town situated 20 miles southeast of Decorah.

“It was surreal,” Vega said.

“One moment I was saying goodbye to my mom as she went to work, and the next, I knew that she was no longer going to be there, and I don’t know what’s going to happen after that.”

In what was then the largest immigration raid in U.S. history, Vega’s mother, along with 388 other immigrants were arrested in Postville, chained, and bused to the National Cattle Congress in Waterloo. The Cattle Congress was outfitted as a detention center where people were tried. His mother was sentenced to five months in prison, moved to several different prisons in the U.S., and deported to Mexico on October 25, 2009.

“It’s easy to say that I felt sad, but I truly think that the best word to encapsulate my feelings is absolute despair,” Vega said. “I felt that nothing could be done except fold under the circumstances and try and figure out how I was going to get back to my mom.”

When asked if she had anyone with her, Vega’s mother claimed she was here alone. Sharing that she had family with her may have gotten his mother released, but she sacrificed her own safety to protect her family. Vega and the rest of his family remained in Postville, where he graduated from John R. Mott high school in 2013. Despite his mother’s sacrifice, the rest of the family, including Vega, still lived in constant fear and took protective measures to ensure their own safety. He described how his family lived in their basement for two weeks after his mother’s arrest.

The fear and isolation Vega felt at that time led him to want to share his story.

Vega emphasized the importance of voting to affect change in immigration policies. He also hopes listeners were moved to share their own experiences of overcoming adversity.

Director of the CEPE Victoria Christman developed a close relationship with Vega during his time at Luther. Christman believes that getting to know someone who has experienced this type of adversity humanizes issues such as immigration.

“When you meet a person who’s living through that issue, it gives you a much more holistic view of the issue,” Christman said. “Having [Vega] tell his story helps people access that history in a very real way, especially as he is a graduate. Students can identify with him in a way that other speakers are more difficult to identify with.” Christman’s purpose in inviting Vega to speak was to encourage difficult conversations and challenge simplified conceptions of complicated issues such as immigration.

Briceida Vargas (‘21) said that Varga’s story made her feel more comfortable about sharing her own story relating to immigration.

“I once was undocumented and recently, a year ago, I became a resident,” Vargas said. “His experience and his feelings of what happened when his mom got deported reminded me of what I had to go through and I also came at a young age. I think coming to the lecture made me feel like it’s fine to say that I once was undocumented.”

In addition to sharing his story in person, Vega shares the story of Postville and its immigrant community in the documentary, “abUSed: The Postville Raid.”

Today, Vega and his family have permanent residency. He lives in Minneapolis with his girlfriend and works for UnitedHealth Group as a business analyst.

There, he works on the Multicultural Communications Solutions team, translating documents and coordinating with other translators to help patients who do not speak English understand their medical information.

He believes it is important for everyone to continue talking about Postville and engage in dialogue about issues surrounding immigration.

“There are still raids happening, there’s still an immigration system that needs to be worked out, and there are still DACA students who are being used as a pawn politically and are thrown into limbo,” Vega said. “Toying with such an important group of young people, who could be the next community leaders, is something that is very detrimental not only to the Hispanic and immigrant community, but also because it puts everyone else at a disadvantage because they will never get to see what these people can bring to the table.”