Lecture on black women in the suffrage era 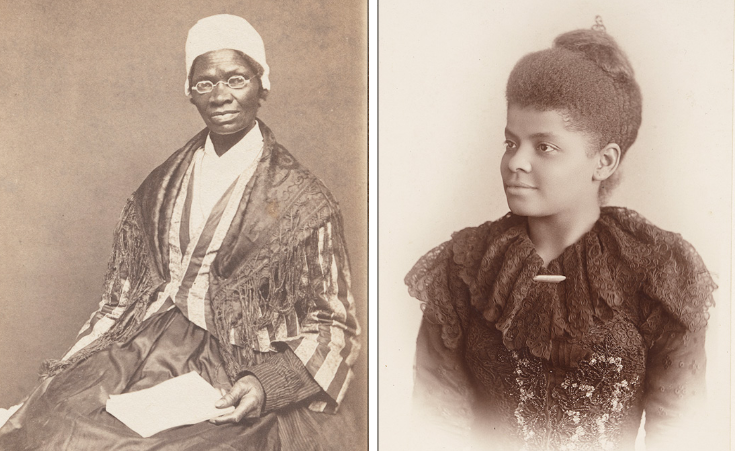 Sojourner Truth and Ida B. Wells were key figures in the black women's suffrage movement.

Assistant Professor of Africana Studies and History Kelly Sharp and Associate Professor of Political Science Carly Foster collaborated on a lecture titled “Black Women in the Suffrage Era” on Mar. 5. The talk was sponsored by the Identity Studies department in recognition of the 100th anniversary of the 19th Amendment, which gave women the right to vote.

They focused on Sojourner Truth and Ida B. Wells, two black women who were prominent figures of the women’s suffrage movement.

Sharp and Foster brought different perspectives on the history of the black women’s suffrage movement from their fields of study. There were different events around the country celebrating the anniversary of the 19th Amendment, but Foster and Sharp wanted to take a different approach by centering African American women’s involvement in the suffrage movement.

The 15th Amendment was passed in 1869, giving African American men the right to vote. Sharp and Foster described how following the 15th Amendment, divisions between the women’s suffrage movement and the abolition movement began to arise.

Though Wells and Truth were both part of the suffrage movement, they were also important to activism for other causes.

“Suffrage was just one of the many civil rights issues addressed by Truth and Wells in their lifetimes,” Sharp said. “Truth was primarily an abolitionist but very much believed full citizenship should come with the right to vote, for both men and women. Wells is most famous for her anti-lynching work but also marched in suffrage campaigns and co-founded many important coalition organizations, such as NAACP.”

Foster and Sharp provided summaries of Truth and Wells’ lives. Truth was enslaved in New York but later escaped, became a Christian and later an itinerant preacher. This influenced her fight against oppression, as she felt she had a religious duty to speak about injustice.

Sharp and Foster described how Truth was caught between the abolition and the suffrage movements, with neither movement fully representing or accepting her. She had to carve her own path within the two movements.

Wells was also enslaved and eventually became a school teacher, journalist, community activist, co- founder of the NAACP, and an anti-lynching crusader. She faced discrimination within the suffrage movement, which was primarily centered on white women.

MaddieGregorek(‘22)was surprised by the intensity of the divisions within the women’s suffrage movement.

“I’d say my biggest takeaway was the fact that the suffrage movement was very [hostile] to African American women,” Gregorek said. “Previously, I had only heard the typical history lesson- type interpretation of the movement, and wasn’t aware of the outright racism suffragettes expressed towards people of color working towards voting rights.”

While the lecture focused on Wells and Truth’s work in the suffrage movement, Sharp believes that it was part of their larger struggle against various kinds of oppression. As African American women, the issues they fought for were personal.

“These women were not just political activists,” Sharp said. “They were fighting for the basic survival of their people.”