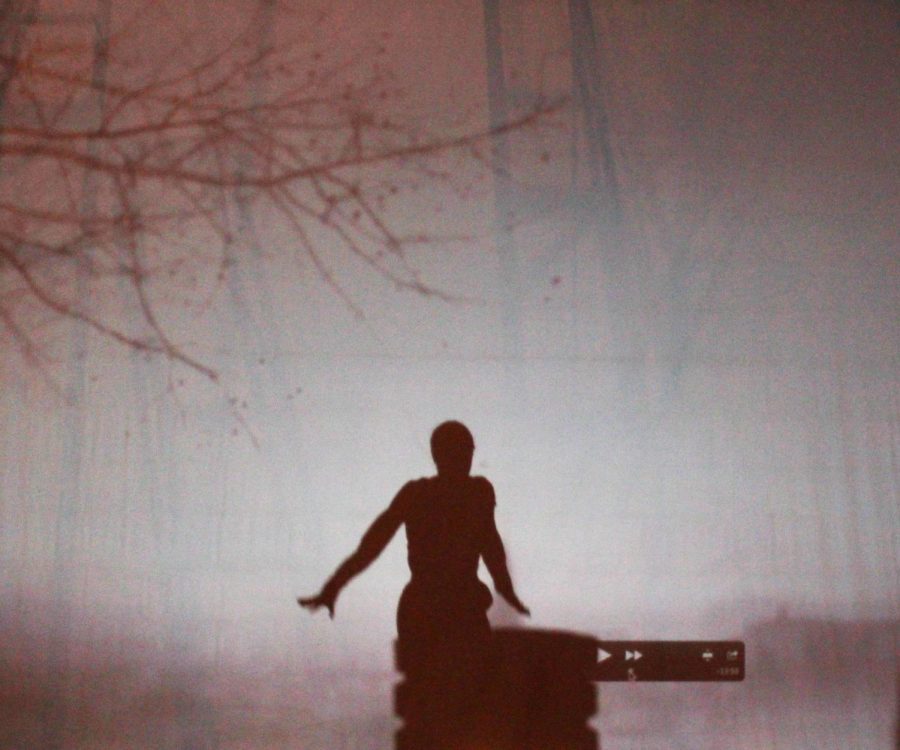 The shadow illusion troupe, Catapult, rehearsed ahead of their Saturday performance I the Center for Faith and Life Main Hall.

The shadow illusion troupe Catapult performed a sold- out show in the Center for Faith and Life Main Hall on Mar. 7 as part of the 2019-2020 Center Stage Series. The night was marked by shadow silhouettes created by eight dancers who contorted their bodies and used props to make illusions of giant animals, famous monuments, natural landscapes and everyday objects

The silhouettes told stories of historical events, like the fall of the Berlin Wall, and fictional tales. Catapult’s Artisitc Director and founder Adam Battelstein focuses on telling these stories in a humorous way.

“I think that’s something that is one of my specialties,” said Battelstein. “I like to tell stories, but they have to be clever, and they have to be funny, and I am really happy when I hear the audience laughing at my dumb jokes.”

Women and children are also a central part to Battelstein’s choreography because he believes they evoke an emotional response from the audience.

“I am not sure why, but I guess they make me feel evocative,” Battelstein said. “Kids and women, usually as the main characters are creating emotions in me, so I do that because I want to create emotion in my audience.”

Catapult was founded in 2009 by Battelstein. He started Catapult after spending almost 20 years with the dance company Pilobulus. The groups name “Catapult” comes from Battelstein’s desire to use the dance troupe as a way to propel his career.

“Battelstein was with another company for 20 years and he decided to leave the company, and when he left, he basically did not have a job, and he did not have any prospects at the time,” Catapult dancer Ashley Turenchalk said. “He decided that Catapult was a good name for the company because it was like catapulting him into the future.”

Catapult began by doing short shows that lasted no more than 10 minutes. Since their debut on “America’s Got Talent” in 2013, Catapult has increased the length of their performances to 90-minute shows.

Head Technician of Campus Programming Kendall Thompson explained that it is the first time that the Center Stage Series has presented a shadow show.

“There is typically a dance troupe every year in the dance stage series, but this is not a traditional dance troupe, and we have never had a shadow dance solo like this,” Thompson said.

“The shadows were amazing,” Roberge. “It is amazing what the human body can do, especially in shadows, and a lot of the topics they covered really touched me a little bit.”

Iju Regmi (‘20) also found the Catapult performance to be a powerful show. Regmi found herself with tears in her eyes during the performance, as it reminded her of her home country of Nepal.

“It was so beautiful; it was so amazing,” Regmi said. “My favorites were the Milestones and the Traveler’s [Tale]. They both were very connected to the feels from home.”

Luther College is part of Catapult’s five-month tour through the US and Canada.

“We do this show almost every night,” said Battelstein. “To get ready for a tour we do a month of rehearsal. Mostly everyone in the company knows the show really well. We had a few news dancers came in, so we spent our time training them to do the show.”

The next Center Stage Series will be Seeds on Mar. 14 in the Center for Faith and Life.