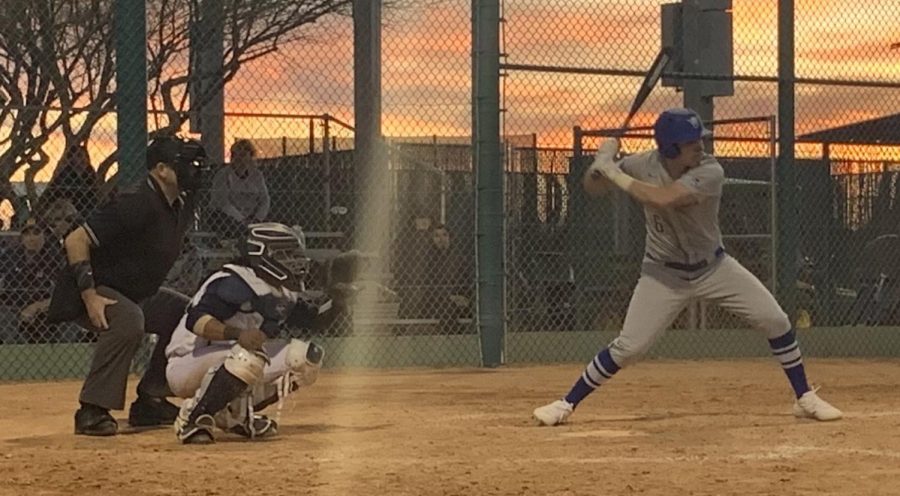 Outfielder Kyle Schnobrich ('20) went 3-for-19 with three RBI's in The Tuscon Invitational.

Luther opened the invitational on Mar. 5 in a walk- off loss against Bethesda University. Luther put up four runs in the top of the first on a solo home run by Catcher Luke Plunkett (‘22) and an RBI single by outfielder Kyle Schnobrich (‘20). Luther loaded the bases and Schnobrich and Owen Vander Linden (‘21) would score on an error, giving Luther a 4-0 lead.

That lead was short lived, as two errors would cost Luther nine runs in the bottom of the first, including a two-out grand slam. Starting pitcher Will Angstman (‘22) lasted two-thirds of the inning, finishing with two strikeouts, three walks, and a hit by pitch.

Luther took the lead back after pinch-hitter Derek McCready (‘20) capped off a five-run fourth inning with an RBI single. Bethesda would retake the lead with two more runs in the bottom of the fourth, 11-10. Luther tied the game on a Vander Linden RBI single in the fifth, and Noah Sebben (‘23) scored on an error in the sixth to take the lead. An insurance run in the seventh gave Luther a 13-11 lead going into the final frame.

Bethesda loaded the bases on two singles and a hit-by- pitch to start off the ninth. Their catcher, Marco Perea tied the game on a two-RBI single, and third baseman John Peukert won the game for Bethesda on an RBI single.

After two scoreless innings, relief pitcher Calvin Brinda (‘21) was given his first loss of the year. Schnobrich led the team with two RBIs, and pitcher Nate Loch (‘22) threw three hitless-innings in relief, racking up two strikeouts and one walk.

Luther lost to Marian University on Mar. 6, 10-5 after giving up seven runs on five hits in the third inning. Luther came back to within three, putting up one run in the seventh and four in the eighth, to make the score 8-5. A two run ninth by Marian would put the game out of reach.

In the first game of a seven inning doubleheader, Luther jumped out to a two run lead in the second inning after an error and two walks loaded the bases. Sebben walked to drive in the first run, and Cullen Stamp (‘23) grounded into an RBI double-play.

Luther added another run in the seventh, but an earned run in the third and a seven run sixth inning by Carthage would cost Luther the game, 8-3.

Kyle Bode (‘20) started the game and allowed one run on five hits with seven strikeouts through five innings. Collin Chalmers (‘22) got his first loss of the year. McCready had Luther’s only hit, with the entire lineup combining for nine walks and four errors.

In the second game, Luther’s only run came in the first inning after Stamp singled to left field and scored after advancing on three straight wild pitches. Carthage would add two runs in the second, one in the fourth, three in the third, and six in the seventh to win 12-1.

Tyler Boesel (‘21) earned his first loss of the year. Luther finished with three total hits, including a double from Kern and four errors.

Luther finished off the invitational with a win against Bethany Lutheran, 9-4.

Holding a one run lead going into the eighth, Luther put together five runs on four hits in the eighth inning. Bethany Lutheran would load the bases and add a run in the bottom of the ninth, but Brinda held the lead.

Relief pitcher Harry Blum (‘23) was credited with the win, his first of the season. On offense, Plunkett went two- for-four with two RBIs and Stamp went three-for-five with an RBI and two runs scored.

Vaughn believes that a win in the final game will be important for morale and praised his pitching staff for their best game of the invitational.

“The final game we needed to reset and finish off the trip on a high note,” Vaughn said. “Nick Dufoe (‘22) started the game coming back off an injury and pitched really well and our guys in relief followed suit.”

Outfielder Joe McKibben (‘21) believes challenges like this are all a regular part of the baseball season.

“Baseball has taught me that not being successful when working towards something is all part of the process,” McKibben said. “When it comes to hitting a baseball, someone who is successful only three times out of 10 is considered a good hitter. Baseball is a very humbling game that I have learned to never take for granted, and it is never an option to take the easy way out.”

For pitcher Carter Petsche (‘23), the relationships with his teammates will be key to having a good season going forward. Luther is still fifth in the American Rivers Conference standings, but they lead the ARC in defensive errors with 21 through nine games this season, good for a fielding rating of .931.

“[Baseball] is all about mental toughness,” Petsche said. “Being on the Luther Baseball team is great. Everyone pushes everyone to get better as a ball player and a person.”

Luther’s next games are on Mar. 14 against Alma College and Millikin University in Decatur, Illinois.