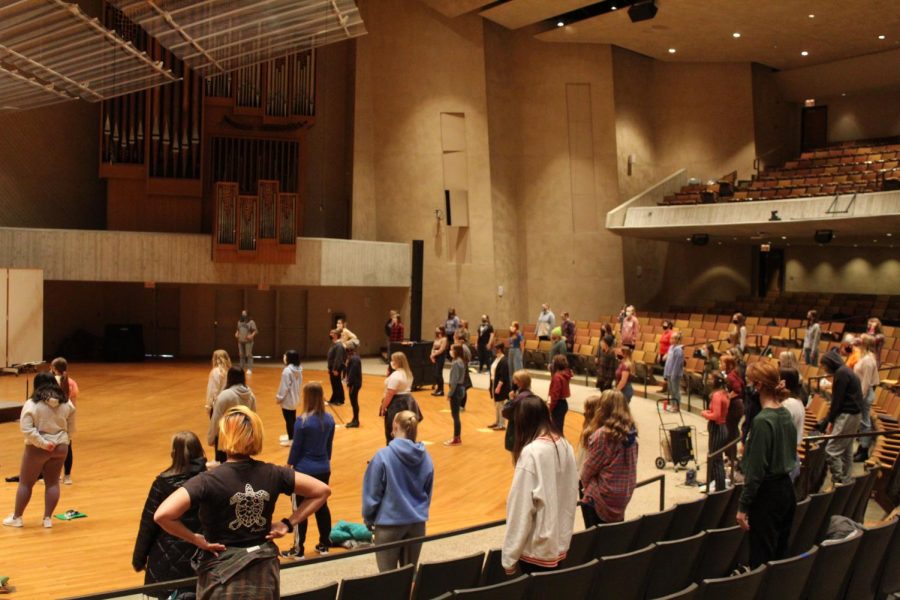 Luther College is known for its exceptional music program, consisting of numerous music ensembles. Since the rise of COVID-19 in early March, there have been several noticeable changes that the music program has made since returning to campus for the 2020-2021 academic year. All rehearsals for ensembles are physically distanced, all members are required to wear a face covering, and ensembles will limit the number of hours they rehearse on a given day. “Choirs will not be wearing robes or holding hands when performing,” Cathedral and Norskkor Director Mark Potvin (‘01) said. “[This] is a typical practice for choirs at Luther.” Practices have been streamlined this year, having to stick to strict schedules.

“Cathedral practices outside for one hour, but we try to practice inside for 30 minutes once per week,” Cathedral Choir member Sela Rist (‘23) said. “We also have to limit the amount of talking we do when entering and exiting the CFL on our inside practice days.”
Most choir rehearsals are held outdoors, good weather permitting. While outside practices allow for longer rehearsals, it also introduces new issues. Elena Dant (‘23), who is an accompanist for the Collegiate Choir, shared some new problems that can arise during outdoor practices.

“When we could rehearse inside prior to the pandemic it was easier to get things done,” Dant said. “It is harder to move faster being outside because everyone is so spread out and the wind makes it difficult to hear.”

This year, Christmas at Luther will be virtual, and there is a shorter amount of time that the groups involved in the production have to get ready.
“Recording for Collegiate starts next week,” Dant said. “There is a shorter window to get our pieces down, and then a shorter time to make sure that the recordings work and flow with the program.”

While there is less time to prepare, students are excited to be part of the Christmas at Luther performance.

“I think that people are just happy that it is still happening in some format,” Dant said. “People are doing their best to be positive and work through it.”
This year, choral groups will not be performing at events such as Sunday services, Family Weekend, and Homecoming. Despite the reduction of performances, music ensembles have been working hard to adjust to the pandemic. Rist shared how several band ensembles are adapting to the new guidelines, and planning for a virtual performance early next year.
“The woodwind and percussion ensemble have talked about the idea of doing a virtual concert in January,” Rist said. “While it is not set in stone, it gives these band members something to look forward to as the year progresses.”

Hoping to return to what is considered “normal” for these music groups, ensembles have had to adapt to the special circumstances. While there are fewer upcoming concerts, the move to virtual performances has allowed more people to tune into Luther’s music ensembles, and has given Luther students performances to look forward to.