Top Banana streams Among Us, Quiplash 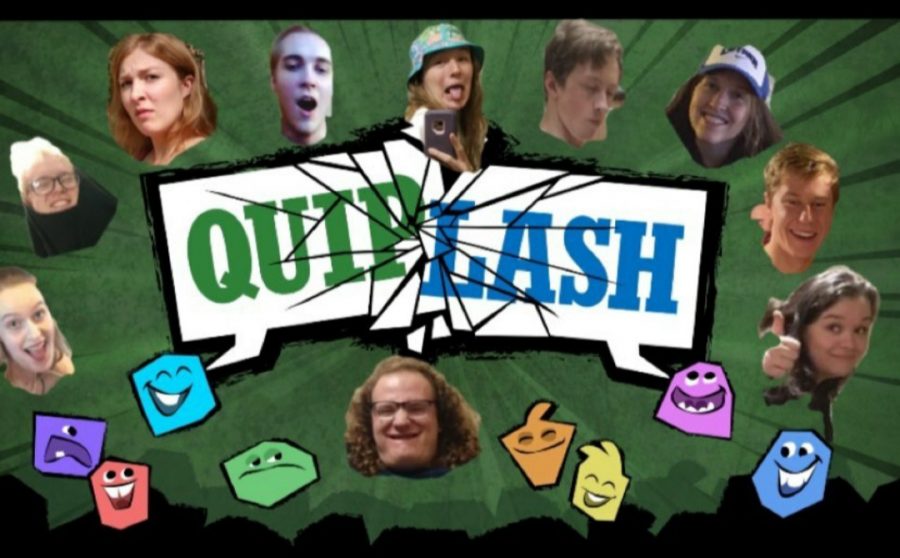 Digital posted circulated on Instagram to advertise the event.

The world of improvisational performance is not limited to theater kids or professional groups. Luther College has its own improv comedy group! On Saturday December 12, Luther’s improv troupe Top Banana hosted a live-stream of the group playing “Among Us” and “Quiplash” on Twitch, an online streaming service. Top Banana is a group of Luther students that perform improv shows for an audience. In a typical year, the troupe of students would host a show every month for an audience, where they would play improv games and create improvised scenes. This year, however, the pandemic has prevented them from gathering in person, especially with large audiences.
Top Banana’s president Paul Adams (‘22) is responsible for planning events and leading practices for the troupe. He explained that “Among Us” is a good platform for improvisational comedians.
“In ‘Among Us’, there is a lot of lying, a lot of talking to each other and convincing each other,” Adams said. “Since we are all a bunch of knuckleheads, I think we would all be very good at lying and bull******** to each other.”
“Among Us” is a popular game similar to the game ‘mafia’ that involves one ‘imposter’. Each player has to complete several tasks, and if they can do that before the imposter kills everyone, then the players win. If not, the imposter wins.
Clare Rolinger (‘22) is the Vice President of Top Banana and is in charge of helping plan events, as well coordinating the troupe’s social media accounts. She believes that “Among Us” is a good exercise for improvisational comedy and could help generate interest in the group.
“I think a lot of us have played “Among Us”, so we thought it would be something really funny and enjoyable for people to tune in and watch us play,” Rolinger said. “It’s a really popular game right now, so we thought it would be something that could garner some interest from other students on campus.”
“Quiplash” is a game that involves creating funny responses to random prompts. Players vote on whose answer is the best and points are awarded to the answers with the most votes.
“‘Quiplash’ is kind of the same as ‘Among Us’ because you have to think on your feet and come up with a funny response to a prompt,” Rolinger said. “Both of these online games are forcing us to use our improv skills in a way that is not typically what you would think of when you think of an improv troupe. But it is definitely a cool way for us to adapt.”
Adams and Rolinger have had to adapt how they plan Top Banana’s events during the pandemic. Because the troupe can no longer host their in-person shows, they have been expanding their online platforms. This was the first event Top Banana hosted this year, but they plan to host more COVID-safe events and performances in the coming semester.
“We plan on streaming a PowerPoint night where all the troupe members are going to make a presentation and show it to everyone,” Adams said. “It’s not very improvy, but it’s funny. If the stream goes well, we are going to do more ‘Quiplash’, more ‘Among Us’, and then we are going to have an advice column on Facebook where people can write in their problems, and we are going to ‘respond’ in comedic fashion kind of like the Onion.”
Payton Lott (‘23) was among the students who attended the event. Although he did not attend any shows last year, he heard of this event through the troupe’s Instagram page and decided to tune in.
“I saw the event on [Top Banana’s] Instagram, and I thought it might be fun to tune in to,” Lott said. “I wasn’t really planning on watching the whole thing, but it was pretty funny, so I ended up watching most of it. It was a really cool event.”
Lott is looking forward to attending some of Top Banana’s in-person events in the future once COVID-19 restrictions lighten and groups are allowed to gather again.
Anyone wanting to keep up with Top Banana can find them on Facebook as ‘Top Banana Improv Troupe’ and Instagram as @top_banana_improv. These platforms will have more information regarding future events and live streams.