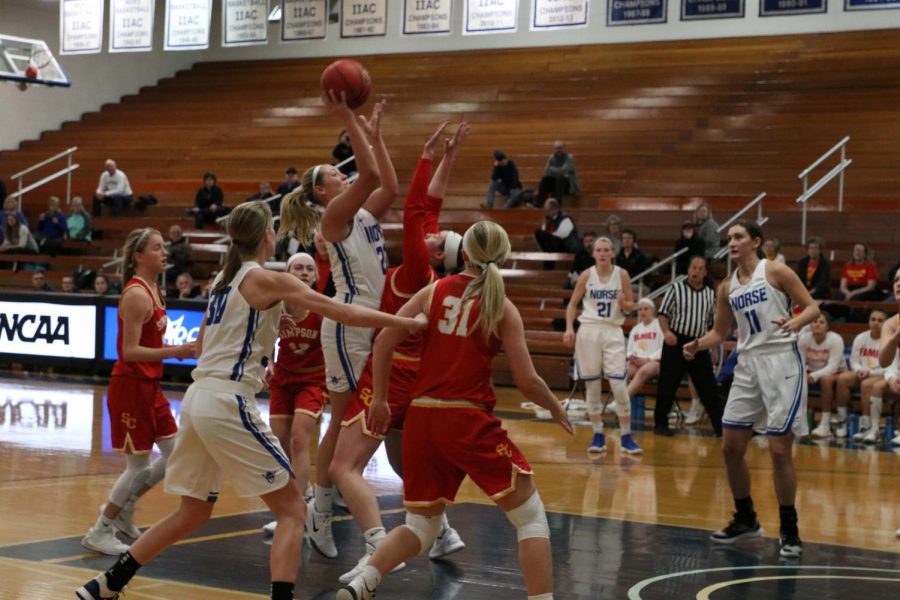 Kaci Jo Ames ('21) goes up for a shot during a game last season against Simpson. Photo courtesy of Photo Bureau.

The Luther Womens’ Basketball Team lost their first game of the season to the North Central University Rams 82-47. Guard Jenna Uphoff (‘23) was the only Luther player to score in double figures, tallying 11 points. Also for the Norse, forward Lizzie Kauls (‘23) scored 9 points and guard Kristen Elliot (‘22) scored 8, while Erin Samerow (‘21) grabbed 10 rebounds. The game was the first in an unusual season where up to this point the team has only been able to practice, not compete.
“In a normal year we would have had two scrimmages and 12 games in at this point,” Luther Womens’ Basketball Head Coach Amanda Bailey said. “[The game against North Central] was an opportunity for us to see where we are at, and what areas we need to work on.”
The Norse, who recently placed 6th in the American Rivers Conference Preseason Coaches Poll, opened the game with full-court pressure. But they fell behind quickly after an early dry spell on offense turned into a nine point North Central lead at the end of the first quarter. Luther tried to switch up their offensive strategy towards the end of the first half by attempting to get players open for three-point shots, but it was unsuccessful; North Central took a massive 46-17 lead into halftime. The second half was equally challenging, as the Norse quickly found themselves in foul trouble, getting six team fouls in the first six minutes of the second half. Although Luther scored 18 points in the third quarter, it wasn’t enough to get back in the game and stop NCU from driving up the score. Bailey was just happy that her team got the chance to play.
“This is a year that won’t be defined by the wins and losses, but rather by our ability to be resilient,” Bailey said. “We need to continue to battle in practice to become a closer team and family.”
Overall, the Norse shot 24.3% from the field, in contrast to a North Central team who had three players in double figures and shot 51.8%. Bailey said that the team was happy to have the opportunity to play and to see where the team is at after graduating a large senior class last spring.
“I am proud of the way our women have approached this season,” Bailey said. “We have a lot of young talent and this is a great year for us to work on self-improvement.”
The Norse will next travel to Cedar Rapids, Iowa on January 20th for a non-conference game against Coe College.