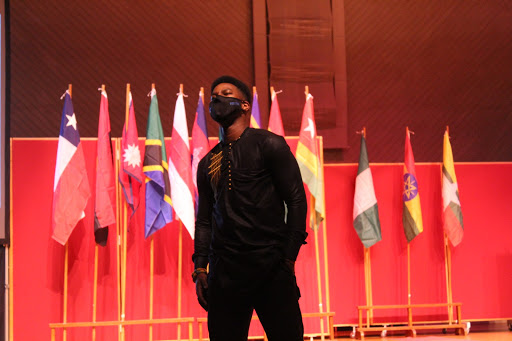 On the evening of February 13, 2021, the International Students and Allies Association (ISAA) hosted the annual International Fashion Show in the Center for Faith and Life main hall. The event showcased different cultural traditions on campus, featuring national attires of international students, musical performances, and a dance number. The event also raised money for a cause selected by the ISAA. This year, the funds went toward supporting refugees of the Tigrayan Genocide in Ethiopia.

“Our primary focus is to highlight international students, our experiences, our needs, things that we do on campus, like the fashion show or the ethnic arts festival,” Neumbo said. “We have meetings where we discuss issues that include a variety of topics and generally encourage global citizenship. We not only have international students that attend our meetings and participate in our events but domestic students as well.”

Samantha Dzangare (‘23) is on the executive board of ISAA and was a stage manager for the performance, ensuring all the models followed COVID-19 protocols. Dzangare said the fashion show to be an important event for international students, where they are able to share their identity with the general Luther community

“[International students] are a really small community on campus, and we don’t really get a chance to talk about where we come from,” Dzangare said. “For example, in class most of the examples we talk about are examples related to the United States. The fashion show is a chance for us to be out there. It is just us telling people about ourselves. People get to learn about the way we dress and the kinds of performances we do. It is a chance for us to showcase our cultures.”

Dzangare also hopes the fashion show made international students more visible in the Luther and Decorah communities, as domestic students and community members may be unaware of the diversity that exists so close to them.

“I want [students] to realize we are here,” Dzangare said. “There are so many countries represented at Luther, and showing that there are so many ways of raising funds. We are using our identity, in a way, to make a change in other people’s lives. I want people to know there is a Zimbabwean on campus, or someone from Angola on campus.”

“I think what [students] should have taken away was the reason behind the fashion show,” Ouro-Akondo said. “It wasn’t just a show for students to strut around, it was more to raise awareness for the struggle and to get people to help.”

Any student wishing to learn more about the different cultures represented on campus is encouraged to approach students and engage in conversation with them. For updates regarding ISAA and future events, follow their Instagram page @luthercollegeisaa.

The Tigrayan Genocide started in early November when Tigray held regional elections, even though national elections were canceled due to COVID-19. This angered the Ethiopian government, who cut off access to clean water and internet, and halted humanitarian aid in the region. Currently, the government forces are not allowing refugees to flee the country. The funds from this show will go toward supporting displaced peoples in nearby Sudanese refugee camps.

For more information on the Tigray genocide, the United Nations High Commissioner for Refugees has released an article summarizing the conflict, which also includes a link to donate the initiative responding to the crisis: