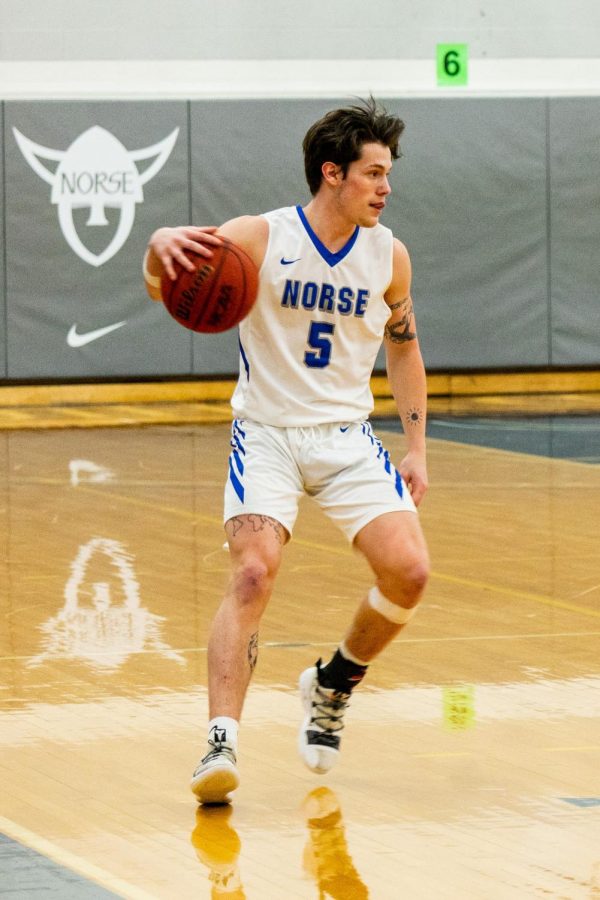 Gage Thompson ('21) dribbles the basketball during a game against Central College on February 10.

The Luther Men’s Basketball team suffered two losses in three days, falling 68-61 to Simpson College on February 8 and 73-65 to Central College on February 10. Because of cancellations and postponements, the games were the team’s second and third official games, as the season has been condensed due to the COVID-19 pandemic.

Against Simpson, two Luther players scored in double figures: forward Aaron Blumberg (‘21) scored 13, and guard Andrew Lazinbat (‘24) added 12. Blumberg also grabbed eight rebounds. Despite erasing a 17 point deficit in the second half, the Norse struggled toward the end of the game, only scoring two points in the last four minutes as Simpson held on to win. Guard Anthony Westhusing (‘21) was disappointed by the loss, but is hopeful for future games.

“Coming up short was tough, but it’s the second game of the season so you can’t be too upset with it,” Westhusing said. “[The season] is a journey, and we have to continue to get better every day.”

Two days later, in the loss against Central, Luther was leading at halftime and during the second half. Central made a dramatic comeback, going on a 19-2 run in the last seven minutes of the game. For Luther, guard Daniel Webster (‘24) led all scorers with 19 points while Rahul Bagga (‘21) scored 10. Lazinbat and Westhusing each added 8, and Blumberg led all rebounders with 9. Despite the two losses, the players and coaching staff felt the score lines did not match the level of effort the team put into both games. Forward Mychal Shed (‘23) believes that in order to continually improve, the team needs to keep looking ahead instead of dwelling on the past.

“We are consistently presented with new challenges, and we just have to stick with the objectives that come to us each week,” Shed said. “We have to compete to the best of our ability, stay together as a unit, and play for each other.”

The basketball team was forced to make adjustments to their season due to the pandemic, including cancellations and postponements of games on short notice. Guard Benny Hughes (‘23) said that three days after the game against Central, the Norse were supposed to travel to play the University of Dubuque before the game was postponed.

“There’s been a lot of uncertainty, so when we are able to play we have to make the most of it,” Hughes said. “It is difficult to play on short turnarounds because it has a huge toll on your body, but all of us just love having the opportunity to play.”

Luther has four games left until the American Rivers Conference Tournament, which starts on March 8. The next game for the Norse will be at home on February 20th against Nebraska Wesleyan University. The game will be live-streamed on the Luther athletics website, and starts at 2:00 PM.