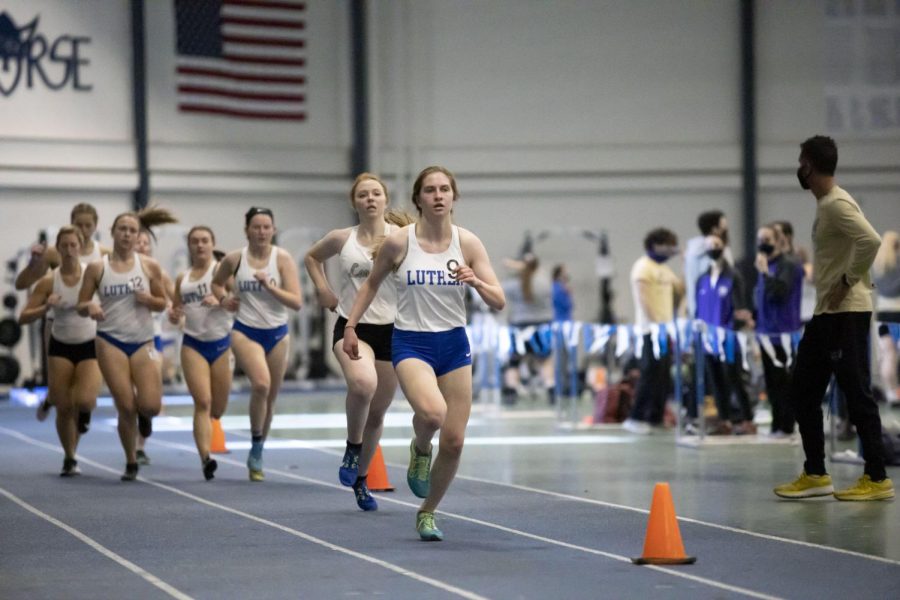 Gabrielle Janssen ('24) leads a pack of runners during Luther's Track and Field triangular against Loras and Coe.

On February 13th, the Luther Men’s and Women’s track and field teams hosted a triangular meet against Loras College and Coe College. On the men’s side, Loras won the meet with a score of 117.5, while Luther came in second with 81.5, and Coe finished third with 59. Loras also won the women’s meet, scoring 131 points. Luther and Coe again finished second and third, respectively, with Luther scoring 81 and Coe scoring 29.

“Overall, the race went really well,” Kelly said. “[Carsten Thompson (‘22)] helped pace the first 400 meters of the race, and I just tried to hold on, and then I ended up running really well.”

“I was working with Lauren, and the two of us would take turns leading and working with each other,” Hornseth said. “Peyton ran the entire thing alone and ran a personal record, so it was a really great race for the three of us.”

While Loras ran away with the victory in both the men’s and women’s meets, Luther Track and Field Head Coaches, Coach Yarrow Pasche and Coach Steve Pasche, both thought their teams performed well.

“We’re seeing some great improvements in performance across the board,” Yarrow Pasche said. “As a team, that’s always an exciting thing to see. Our runners had some things that maybe don’t show up as clearly in the results, but I think people walked away thinking that things are going in the right direction.”

Steve Pasche hopes that his athletes see the upcoming meets as chances for more improvement.

“I’m excited about what our team has been doing every day in practice,” Steve Pasche said. “They’ve done so much hard work and have been building great camaraderie, and that’s so fulfilling. For the student-athlete experience, it’s more about that, every day, and what that provides them.”

Both track and field teams will travel to Pella, Iowa, on Saturday, February 20, for triangulars against Central College and Simpson College. Both meets will start at 12:00 PM.