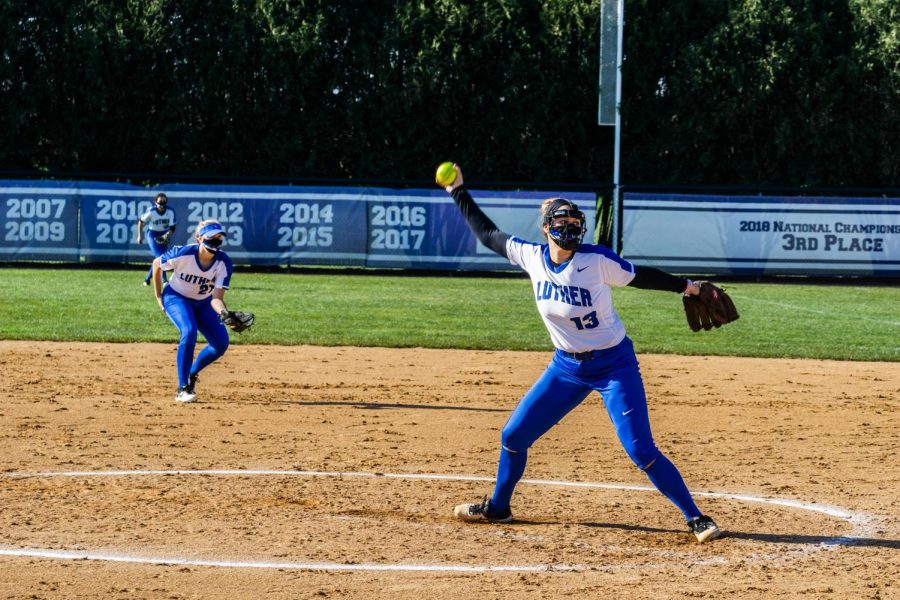 In their first doubleheader since March of 2020, the Luther softball team opened their season strong on February 21 with a pair of wins against Bethany Lutheran College at the Mankato State University Dome in Mankato, MN. The first game was won 8-0 in five innings, and the second was won 9-1 in six.

The first game started off with relatively low scores, but the Norse’s solid defense gave them time to find their bats and jump to a 3-0 lead by the end of the 3rd inning. A 5-run 5th inning sealed the deal for Luther. Anna Spore (‘24) led the Norse with three RBIs. In the second game, Bethany Lutheran managed to jump to an early 1-0 lead, but three runs in the third inning put Luther back in the lead, which they would not lose. Again, Spore was strong at the plate and ended the game by hitting a two-run home run to left field that she called “pretty amazing.”

“People who hit home runs always say that they do it by accident,” Spore said. “The count was full, and I had fouled a few off, and I was just trying to stay alive. So, I just squared up and hoped for the best.”

In both games, Kendra Cooper (‘22) and Samantha Thompson (‘23) were the winning pitchers; Luther’s pitching staff only gave up seven hits and three walks throughout the day.

“[Bethany Lutheran] struggled on hitting a rise-ball, which is one of my strongest [pitches],” Thompson said. “I can really throw strikes with that ball when I’m pitching well.”

While production came from every spot in the Norse lineup, the leadership provided by the upperclassmen was paramount.

“I think they’ve done a very good job of being leaders,” Spore said. “They’ve shown us freshmen how things are done, both softball related and COVID-19 related, always with good hearts.”

Luther Softball Head Coach and Director of Athletics Renae Hartl has been happy with all of her team members in their return to competitive play. Their pandemic-shortened 2020 season only allowed the team to play eight games. Now, in the 2021 season, the team also has to balance COVID-19 protocols, including pairing team members together for hitting practices and requiring masks during play underneath helmets and faceguards.

“We do a lot of testing, and everyone is sticking with their structured hitting partner,” Hartl said. “The team doesn’t complain, they’ll do whatever it takes to play.”

After the doubleheader against Bethany Lutheran, the softball team had a pair of doubleheaders on February 27 and 28 against St. Norbert College and the College of St. Scholastica at the Rochester Regional Dome in Rochester, MN. Luther split with St. Norbert, winning the first game 5-0 and the second game 2-3, and also split with St. Scholastica, winning the first game 8-0 but losing the second 6-10.

Luther’s next scheduled doubleheaders will be against the University of Northwestern-Roseville and St. Mary’s University on March 6 and 7. Luther will again play at the Rochester Dome for both doubleheaders.