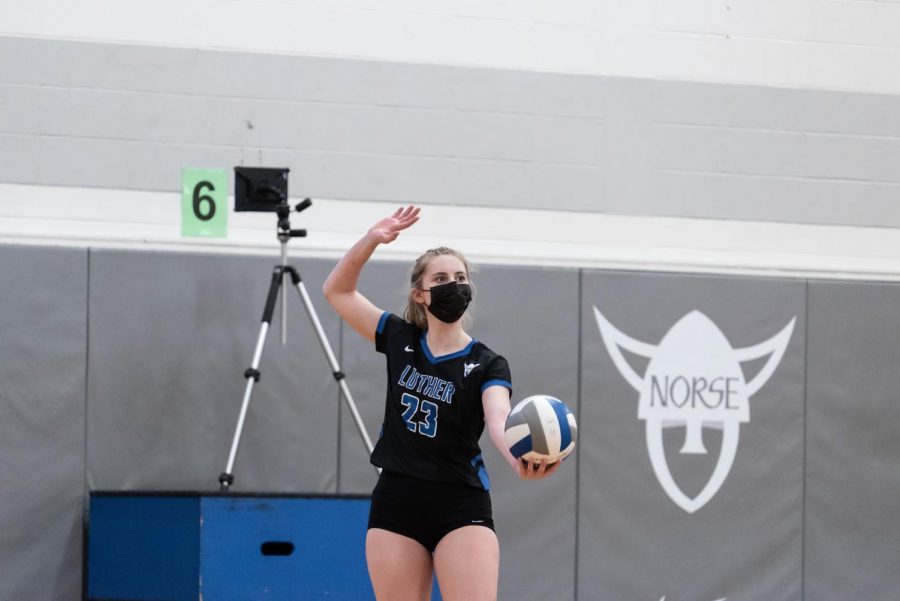 The Norse jumped out to a 5-1 lead in the first set, but Loras managed to close the gap. The remaining portion of the set was very back-and-forth, with Luther holding on to a 22-20 lead until Loras went on a 5-0 run to secure the first set 25-22. The second set started out as strong as the first for the Norse, with a 6-2 lead. Once again, Loras managed to come back and force a tie at 20-20 before Luther won five of the next seven points to take the set and equalize the match.

However, Loras managed to pull away in the third set to win 25-11 and won the fourth and final set by making a run near the end to go up 24-17; the Norse saved two match points before Loras finally put the match away. In the end, the Duhawks — ranked 16th nationally — totaled 57 kills and had a hitting percentage of .351%, whereas Luther only hit .192% and had 18 attack errors. Becker noticed that Loras was being aggressive right from the start of the match, a strategy that Luther could use in the future.

“While we didn’t win the match, I thought it was good for us to feel how setting the pace for a game and pushing all the way will translate into match wins,” Becker said.

Like all other activities at Luther College, the volleyball season has been altered significantly due to the COVID-19 pandemic. For starters, volleyball was one of the many fall sports postponed to the spring by the American Rivers Conference. Unlike a normal year, where the season would have ended in November, Luther volleyball players and coaches officially began their season on February 20th.

Practices have also been different for the teams, as practice group sizes have been limited and masks have been required at all times. Maddie Jonas (‘21) expressed her belief that the team has adjusted well to pandemic protocols.

“[The team] started out only being able to practice in groups of eight,” Jonas said. “But, we’ve done well with COVID-19 protocols and precautions, so recently, we were allowed to practice with all 30 players.”
Many of the players have noticed how different the season feels, not just because of the postponed schedule, but also because of the increased time for team bonding as a result of the fall postponement.

“Normally, since we’re a fall sport, we have a week or two of preseason, but this year we’ve had six months of practices with each other and only now we’re jumping into games,” Jenewein said. “It’s a lot different, but it’s been kind of nice to work with the team for longer and get to know players on a deeper level.”

The Luther volleyball team is halfway through their eight-game season, a notable change from previous seasons, which would see the team playing well over 20 games. The Norse next play at Simpson College on March 13. The game can be streamed live on the Luther Athletics website, and will start at 1 p.m.