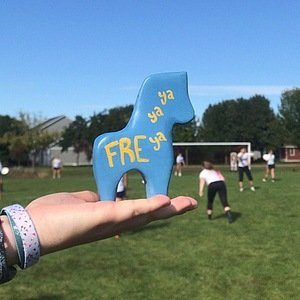 Max, the Freya mascot, handcrafted by a former player in her Norwegian woodworking class, travels with Freya to every match. Photo courtesy of luther.edu

The sun rises on a Sunday morning in the fall and campus is quiet, except for voices from members of the Luther women’s ultimate frisbee team, Freya, that echo from the intramural fields.

The group is singing “Kumbaya” as part of their pre-game ritual. The players huddle close in a circle, arms around each other as they shout, “O Lord, Kumbaya.” Growing louder each verse, the song eventually leads to the spirited “L-U-T-H-E-R” chant. The ritual ends with Freya’s very own chant before the players run onto the field. This scene usually takes place before Freya tournaments.

Freya is Luther’s women’s ultimate frisbee team, named after the Norse goddess of love, beauty, and war. Drawing inspiration from this figure, Freya consists of women who come together to create an active atmosphere where members practice healthy competition and growth as a community. Team captain Annika Jensen (‘21) described her experience on the team.

Freya seeks to provide a positive environment where people can explore their interests, meet others, and learn the game of ultimate frisbee. The team competes in tournaments each year in the spring and fall and practices together throughout the school year.

The 2020-21 school year has looked different for Freya as both their fall and spring seasons were canceled due to the COVID-19 pandemic. Freya held practices and creative virtual activities to retain a sense of community and cohesiveness during this unusual year.

Despite the limitations that COVID-19 has presented, the outreach by Freya leadership this fall led to an overwhelming number of first-year students who became involved in Freya. As the ultimate frisbee scene grows in high school, Freya has seen more interest from prospective students and incoming first-years. Team captain Gracie Velasco (‘21) shared how first-year interest has been particularly apparent this year.

“We were just talking last night about how different this season looks in comparison to all the other ones we’ve had,” Velasco said. “Really, I don’t know what we did. We didn’t do much to get people interested, but people came to us this year, especially the first-years. They really showed up. […] It was really incredible to see that we have really great numbers in terms of first-years from day one, and many of them have stuck around.”

A unique aspect of ultimate frisbee that Freya embraces is what is called the “spirit of the game.” Articulated in the USA Ultimate Rulebook, this element calls the players to take responsibility for maintaining fair play, knowing the rules, and upholding the integrity of the game.

There are no neutral referees at the games. Instead, it is the collective responsibility of the players to self-officiate, establish and maintain mutual respect, and ensure that the basic joy of playing is there. Freya coach Chris Lovagnini described the “spirit of the game” that is central to Freya’s game.

Velasco, Jensen, and team manager Emma Hitz-Kelly (‘21) all had unique journeys to their involvement in Freya, demonstrating how the team includes a diverse group of players with different interests, personalities, and experiences. Hitz-Kelly shared how that is one of her favorite parts of being in Freya.

“I think it’s really cool because we get a lot of people from different parts of campus,” Hitz-Kelly said. “[People] who are interested in doing different things and pursuing different goals within Luther life. Bringing that diversity of interest into frisbee has been really cool, to learn a lot from my fellow teammates.”

While there may be no tournaments for Freya this year, the group is alive in spirit. As the group prepares for a difficult goodbye to the graduating seniors, they welcome in a new batch of athletes. Come next fall, the women of Freya will take the field again, shouting “Kumbaya” and “L-U-T-H-E-R” for the whole campus to hear.

*AMENDMENT: The title has been changed to better reflect the content of the story *