Men’s Basketball fall in the first round of ARC tournament 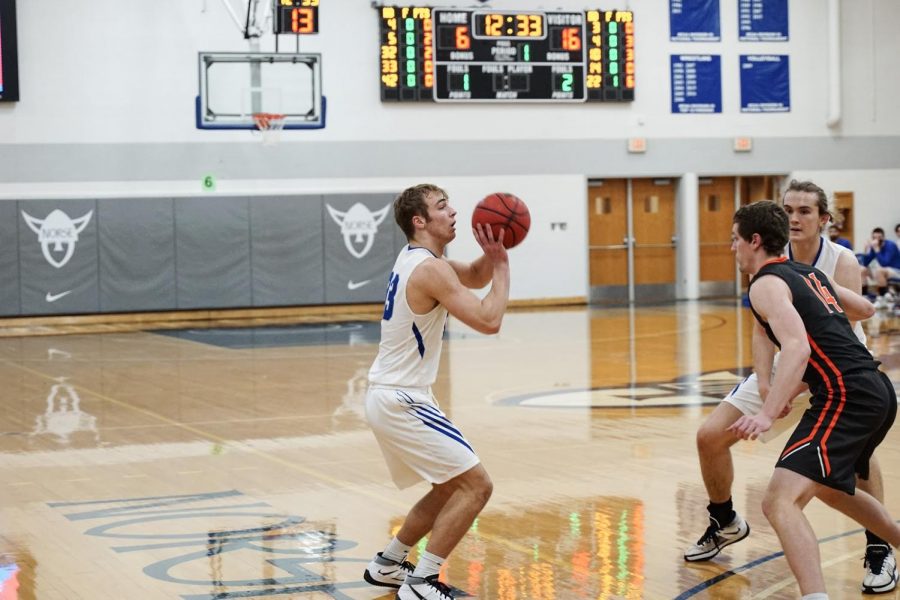 Matthew Franzen (‘24) shoots a three-pointer during a game on February 22 against Wartburg.

In the first round of the American Rivers Conference tournament, the Luther men’s basketball team lost 66-61 on March 8 to Nebraska Wesleyan University. Matthew Franzen (‘24) led all Norse scorers with 14 points, while Anthony Westhusing (‘21) scored 11, and Jadyn Torres (‘21) scored nine.

Nebraska Wesleyan started strong in the first half as they built up a 14 point lead, but the Norse were able to cut the Prairie Wolves’ lead to seven going into halftime. Luther’s shooting heated up in the second half as they made six three-pointers and put pressure on Nebraska Wesleyan. But in the last minute of the game, despite efforts by Franzen and Jordan Pennix (‘22) to win the game for the Norse, Nebraska Wesleyan held the lead to advance in the tournament.

“Our guys did a great job versus Nebraska Wesleyan,” Luther men’s basketball Head Coach Mark Franzen said. “We were a few possessions away from advancing to the next round.”

The first-round loss ends a COVID-affected season for the Norse, who finished with an overall record of 1-9. Coach Franzen sees the season as a way to build experience for a Luther squad with 22 underclassmen.

“We will miss our seniors [next year],” Coach Franzen said. “However, we have a good core of young guys coming back that gained experience this year.”

Matthew Franzen was also grateful for the upperclassmen throughout a complicated season that saw players go into quarantine and games get postponed or canceled.

“Credit to the seniors, [they had] great leadership,” Matthew Franzen said. “They did an amazing job this whole year, taking us freshmen and underclassmen under their wing.”

The American Rivers Conference tournament finished on March 13, with Dubuque University defeating Buena Vista University in the finals. The Luther athletes are hoping to return to a full 25-game schedule next season.