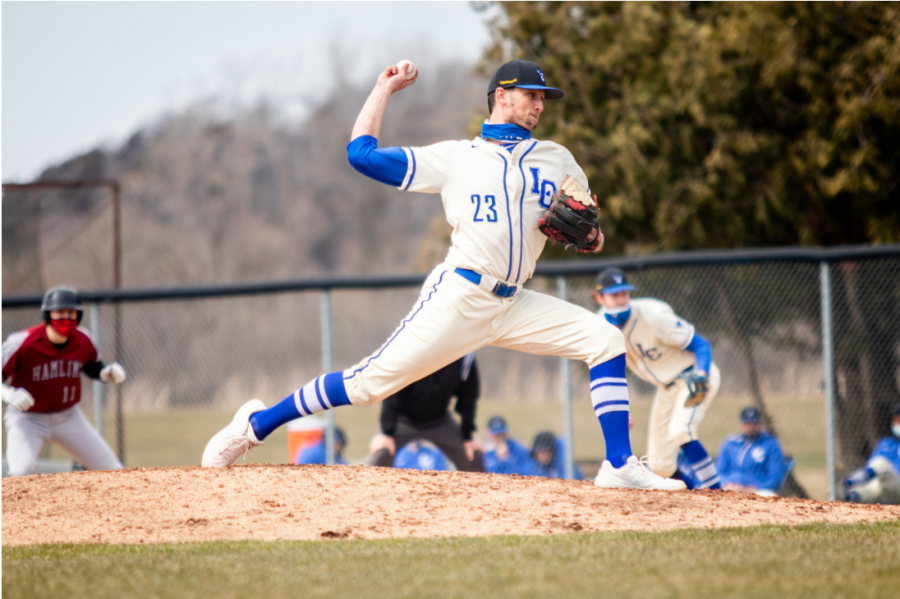 Luther pitcher Nick Dufoe ('22) throws a pitch during the first of two games against Hamline on March 21. Dufoe pitched eight innings and only allowed one earned run.

In their first pair of home games since April 2019, the Luther baseball team swept their non-conference doubleheader against Hamline University on March 22. The final scores were 6-3 and 11-6, respectively. For the Norse, notable individual performances came from winning pitchers Nick Dufoe (‘22) and John Colucci III (‘22). Also, Kyle Schnobrich (‘21) had four RBI’s on the day, and Luke Plunkett (‘22) had a .750 batting average through both games.

In game one, Luther led 2-1 until the Pipers took a 3-2 lead in the eighth inning after a ground ball RBI and a sacrifice bunt. The Norse recovered in the bottom of the eighth after Plunkett hit a double that scored two runs, and Schnobrich drove in two more runs for the Norse with a hit to left field. Luther’s four runs in the eighth inning ultimately put them in the lead 6-3, and they held on to win the first game.

The second game of the doubleheader was far less close, as the Norse scored 11 runs in the first three innings of the game, nine of which came in the third inning where Luther had 14 batters come to the plate. A long list of Luther players had RBI’s in the game, including Peyton Lindmark (‘23), Owen Vander Linden (‘21) and Schnobrich. Despite scoring all six of their runs in the last five innings of the game, Hamline could not catch Luther’s lead on the scoreboard, and the game finished with the Norse winning 11-6. As a result of the sweep, Luther’s season record was leveled to 4-4.

Overall, Vander Linden was happy with the energy the team brought to the field, and was thankful for the opportunity to play at all during the pandemic.

“The abrupt end of last season showed us that we cannot take these amazing moments for granted,” Vander Linden said. “Playing college baseball is an experience that very few people have the opportunity to pursue, and we are grateful to get back on the field and compete as a team.”

Luther’s home doubleheader was one of the first athletic events played under the spring sports home attendance policy that the Luther College athletic department recently announced. The policy places no restrictions on the number of spectators, but does require face masks and physical distancing at all times. Luther Baseball Head Coach Bryan Nikkel said he could see that his players were very excited to play in front of a crowd.

“I can’t thank [associate athletic director Alex Smith (‘03)] enough for his efforts to provide a safe, fan-friendly environment,” Nikkel said. “We have a great home venue that our players take a lot of pride in, and having family and friends in attendance added to the joy of taking the field.”

Looking ahead at the baseball schedule, the Norse will play all conference games for the rest of the season, something that Schnobrich was really excited about.

“It has been a long time since we have played teams like Coe, Wartburg and Dubuque,” Schnobrich said. “I am looking forward to those rivalries being renewed and the competitiveness of the ARC.”

The next games for the Norse will be doubleheaders on March 26-27 against the University of Dubuque. All four games will be played at home; games start at 1:00 p.m. and 3:30 p.m. on both days. All action will be live-streamed on the Luther athletics website.