“The Man Card” and The Dangers of Toxic Masculinity 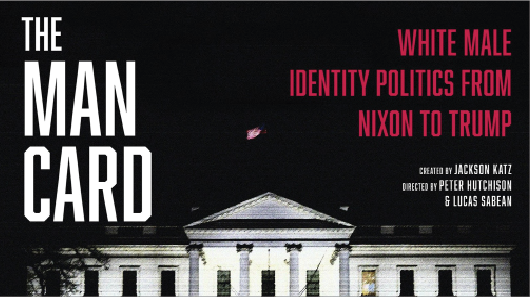 On March 16, 2021, Luther continued its celebration of Women’s History Month with a virtual screening of the documentary “The Man Card” to open a conversation around how recent presidential campaigns have appealed to white male voters through fear-based messaging.

From Nixon to Trump, “The Man Card” investigates how the Republican Party rebranded itself as the party for “real” men. Following the civil rights movement of the 1960s, the documentary describes how Republicans tapped into the “crisis of white masculinity,” which arose from the upheaval of dominant social structures. Portraying Democratic leaders as soft, the documentary depicts how Republicans set the stage for a major shift in their voter base that centers around white and working-class men.

“Tragically, the pain and suffering of ordinary Americans has all too frequently been hijacked by politicians too beholden to corporate interests to fight for legislation that would materially improve the lives of working people,” narrator Peter Huchison said. “Rather than fighting for systemic change to restore the sense of pride and purpose so many white working-class men are looking for, right-wing political leaders have offered them symbolic recognition instead.”

“The Man Card” draws on examples from presidential campaigns that illustrate the targeted appeals to white masculinity. Specifically, the documentary focuses on Nixon’s law and order rhetoric, Reagan’s use of rugged individualism, and Trump’s hypermasculine political presence. Along the way, the film shows how Democratic leaders, such as Bill Clinton, responded by adopting similar strategies.

Johnson commented on his hopes for those who watch the film. He sees the film’s commentary on fear-based messaging as especially important. Ultimately, Johnson hopes that the film will help audiences understand political messages and their exploitative power.

“After someone watches this film, one of my central hopes is that they start to recognize fear-based messaging in political advertisements,” Johnson said. “Whether from the left or from the right, I hope they recognize this fear-based messaging preys on our insecurities. Oftentimes, those insecurities aren’t necessarily real. Instead, they’re being put together by folks that have the interests of their candidate in mind.”

Sweet found the documentary’s discussion of the Trump campaign particularly important due to its relevance. In today’s political climate, Sweet saw Trump’s appeal to “chest-thumping masculinity” as a dangerous strategy that upheld misogynistic beliefs.

“I don’t think there’s any question when you look at a president like Donald Trump that masculinity was a core element of his political persona,” Sweet said. “There was a lot of concern about the open degree of misogyny and the way [Trump] would talk about women.”

The discussion ended with Johnson and Sweet prompting the audience to consider how masculinity might be redefined in a more inclusive and productive way.

As Women’s History Month enters into its final week, Johnson and Sweet’s words and the evidence of toxic masculinity in “The Man Card” challenge their audience to question notions of masculinity that degrade and objectify women. Through their perspectives, such conversation requires a commitment to sustained discourse and a willingness to question common understandings of what it means to be “a man.”