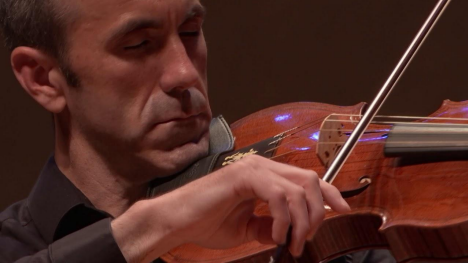 Martin’s performance featured all new repertoire for him, including sonatas by Johannes Brahms and York Bowen. Photo courtesy of Jackson Geadelmann | CHIPS

On Friday, March 19 at 7:30 p.m., the Luther music department held a recital as a part of the Faculty Artist Series, featuring Professor of Music Spencer Martin on viola. The recital was live streamed, but a limited audience was able to experience the recital in-person.
The performance featured several pieces transcribed for viola, including “Ricercar No. 6 in G Minor” by Domenico Gabrielli, “Fantasie in E Minor, TWV 40:22” by George Phillip Telemann, “Sonata in D Major, Op. 87” by Johannes Brahms, and “Sonata No. 1 in C Minor, Op. 18,” by York Bowen.
Martin’s performances have been a staple at Luther since he joined the faculty in 2002. Colleagues both new and familiar with his work have been consistently impressed with his demeanor on the stage. One of his students, Abbey Falconer (‘22), was in attendance Friday night.
“Confidence is key,” Falconer said. “No matter whether he was confident or not, he definitely portrays it in any of his performances. From an audience standpoint, you can’t ever tell if he makes a mistake or not.”
Martin is also part of the Luther College piano quartet, which is composed of four Luther music faculty professors. Martin’s fellow piano quartet members were also in attendance and echoed Falconer’s comments. Assistant Professor of Music Igor Kalnin has played in the Luther College piano quartet with Martin since the fall of 2015, and explained why he enjoys working with Martin.
“I like the sense of effortless playing,” Kalnin said. “He’s a very balanced musician and it’s represented in his physical movement. With a professional eye, I can see how he utilizes his technique, everything is very efficient. It’s a quality he’s always had.”
Assistant Professor of Music Kacy Clopton, who is in her first year of teaching cello at Luther, commented on Martin’s receptiveness to new ideas and to collaboration. Even in just one year of playing with Martin in the piano quartet, she was also able to pick up on that effortlessness in the way he improvises on stage.
“Spencer is really exciting to play with, and play off,” Clopton said. “One of the things I picked up on right away is that if you toss out an idea, and see if [he] bounces it back to you, he does it instantly. That’s the way you can tell you’re working with fun colleagues, and everybody gets it.”
The program Martin performed consisted of a new repertoire for him. Martin loves to try new music, even though it may be considerably easier to replay an old piece of repertoire he has performed numerous times before.
“Oftentimes, when we’ve been around a little while, we repeat pieces we’ve done before, but this whole program is all new music to me,” Martin said. “There are no old friends on this program, they’re all new friends, so I’m excited to share that.”
A willingness to branch out is something that Martin wants for each of his students. He sees every performance as a teaching opportunity, and a chance to put what is taught in lessons into practice.
“We need to present [our art] on campus for the benefit of our students,” Martin said. “So that they learn the repertoire, so they can see us practicing what we preach in modeling good playing and performing. It’s important for me that I’m always engaged in the same process that I’m asking my students to be engaged in.”
Martin’s recital was not the only big event happening this past Friday in the music department. On Friday morning, students involved in the music department received an email announcing the return of live audiences to large group concerts. The crowds will be limited, distanced, and a ticket will be required prior to entry. Though invite-only live audiences are allowed at recitals now, Martin is very much looking forward to when crowds can return to the Noble Recital Hall.
“I think all of us long for the day we can go back to having normal-sized live audiences, [to] create the chemistry that we normally have in the concert hall,’’ Martin said. “ I think as an audience member, we end up sitting through more concerts than we play––or sing! I want to be there too.”