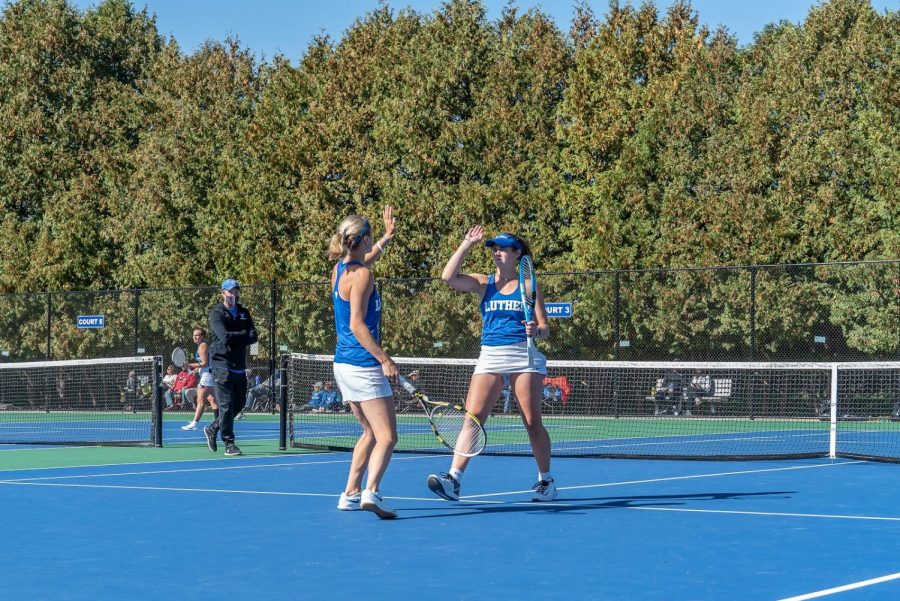 Devon Bourget (‘21), left, and Shelby Cook (‘22), right, celebrate winning a point in their doubles match during a meet against Central College on October 4, 2020.

On Saturday, March 27, Luther’s men’s and women’s tennis teams traveled to Bloomington, MN, to face off against the University of Wisconsin-Eau Claire. Both teams fell to the Blugolds; the women lost 3-6, while the men lost 4-5.

The men’s team held a 2-1 lead after doubles play, with the duo of Nyathi Motlojoa (‘22) and Cole Schneider (‘21) and the duo of Max Loen (‘24) and Brook Norwood (‘21) winning their matches 8-3 and 8-6, respectively. Motlojoa and Loen managed to win their singles matches in straight sets as well, (Motlojoa at No. 1 singles and Loen at No. 3 singles) but UW-Eau Claire secured the winning point after a hard fought match between Schneider and Eau Claire’s Hunter Roseth saw Schneider fall in three sets, 7-5, 3-6, [10-4]. The loss brought Luther’s season record to 4-3. Motlojoa acknowledged that it was a really close loss for the Norse against a tough non-conference opponent.

“After [a 5-4 loss to UW-Whitewater] a few weeks ago, we knew that we could definitely compete with high-level teams, such as Eau Claire,” Motlojoa said. “Going in, we expected to give them a good run and possibly come out victorious, but because of very small things in the overall match, we fell short and lost.”

The Norse women were only able to win one doubles match, with Emily Rubbelke (‘23) and Anna Spencer (‘21) getting the 8-5 win at No. 3 doubles. Devon Bourget (‘21) and Shelby Cook (‘22) won their singles matches at No. 1 and No. 2 singles, with both of them improving to personal records of 8-4 and 10-2 on the year, respectively. Additionally, despite losing, Sofia Sackett (‘24) and Natalia Smith (‘24) both took their singles matches to third set tiebreakers. This was only the second loss of the year for the Luther women, and their record currently sits at 9-2.

“I think that our team fought and battled,” Sackett said. “Our team seemed to have a lot of great points and moments, but playing UW-Eau Claire has motivated us and showed us what we need to work on in upcoming practices.”

Luther Tennis Head Coach Adam Strand (‘04) was happy to see consistency in effort levels from both teams, and liked that his players were dictating points in both the singles and doubles matches.

“We had a lot of players putting it on the line each point for themselves and their teammates, and that is very important,” Strand said. “Playing offensive tennis when we had those opportunities was effective and is something that we will continue to work on in practice.”