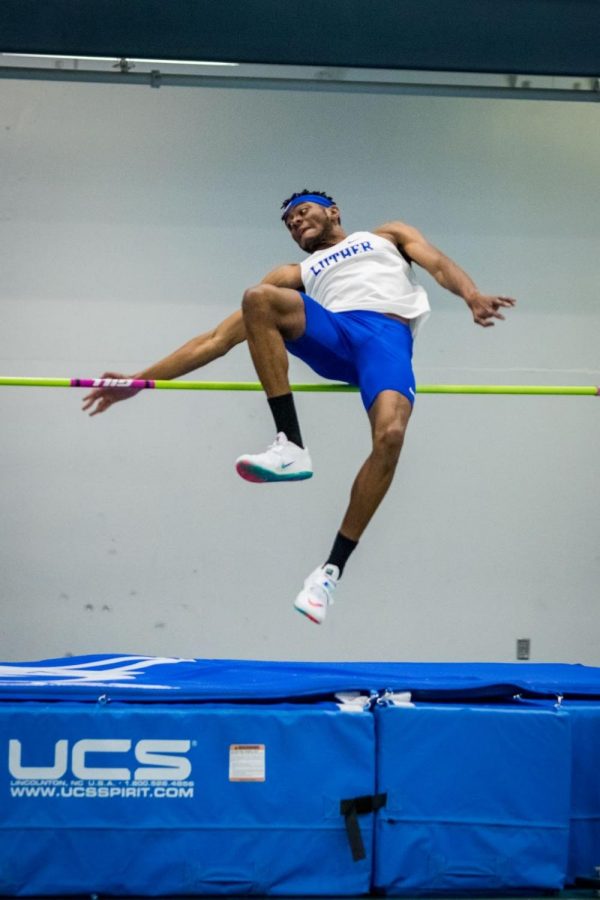 Jaden Bilal (‘24) during the American Rivers Conference Track and Field Triangular on February 27, 2021.

Luther Women’s Track and Field Head Coach Yarrow Pasche was happy to have the opportunity to compete at the Spartan Invitational.

“So much of this season is shadowed by the knowledge that we did not have a season last year, that a sense of gratitude permeates each opportunity we have this season,” Pasche said. “It was fantastic to see the grit and joy expressed [by the Norse].”

“As the weather gets warmer and I get more time to train for the upcoming meets, I think I’ll be able to add a couple more inches to my high jump and knock a second or two off my 400 times,” Peters said. “For all of us on the team, having this meet to gauge where we’re at gives us all a glimpse at the potential we have.”

Many Luther runners, like Lewis and Peters, said their races were particularly challenging because of how the meet was disrupted by inclement weather. Athletes had to run their races through a rainstorm with temperatures in the 40s.

“There were so many extra uncontrollable factors in that race given the weather,” Lewis said. “It was really important for me to focus on what I could control and run my race.”

Luther Men’s Track and Field Head Coach Steve Pasche commended his athletes for their performances in the face of tough conditions.

“Going into the meet, we were aware of the weather forecast; winds, rain throughout and low temperatures,” Pasche said. “Those are challenging conditions for any event in track and field, so rather [than] this being an opportunity for most folks to go after personal bests, it was a better opportunity for working through adverse conditions, focus on head-to-head competition, and get in a high-quality workout.”

The next scheduled competition for both teams will be on Saturday, April 17 at the Augustana College Meet of Champions in Rock Island, Illinois. Live stats will be available on the Luther athletics website.