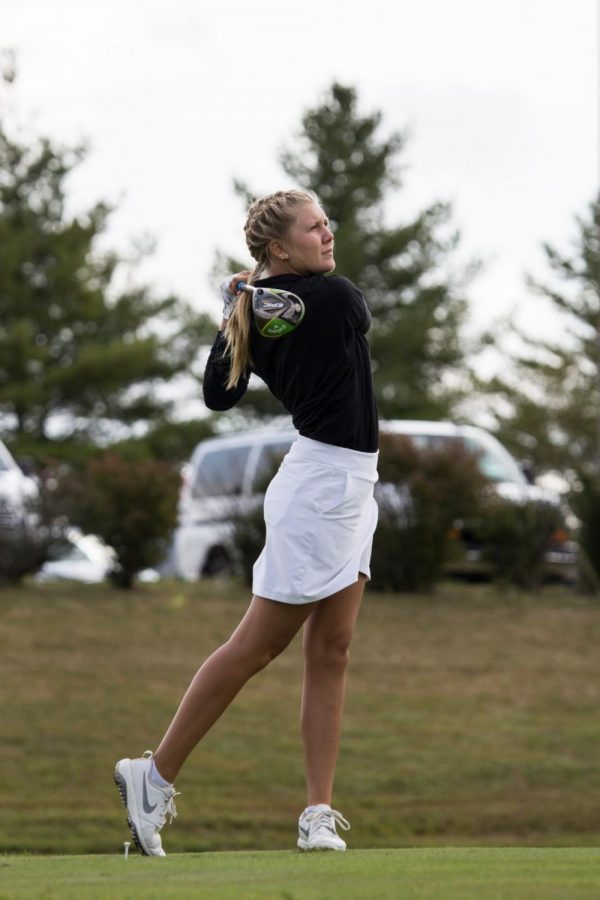 Alayna Eichstadt (‘23) hits a shot at the Norse Classic in September 2020.

In their penultimate regular-season competition, the Luther women’s golf team finished third out of seven teams at the Mount Mercy University Spring Invitational on April 18, 2021. The invitational, which was held at Hunter’s Ridge Golf Course in Marion, Iowa, was won by Mount Mercy, who finished with a team score of 340 points. The Norse shot a team score of 360 to place third, while St. Ambrose University placed second, shooting 357.

According to Bartlett, the Norse golfers were challenged by the high difficulty of the Hunter’s Ridge course. Additionally, the weather conditions were very dry, which caused shots to not hold onto the greens.

“Having only played this course once as a team, we did not have a lot of practice dealing with the strange layout of the course,” Bartlett said.

Luther women’s golf will play their final competition of the year at the Central College Match Play Tournament at Bos Landen Golf Course in Pella, Iowa. The four-team event will see Luther compete against Central College, Wartburg College and Nebraska Wesleyan University; it will be the first match play event for the Norse in four years.

“Match play is a lot of fun and requires a different set of strategies compared to a stroke play event,” Luther Women’s Golf Head Coach David Lester said. “[Bos Landen Golf Course] is another brutal course with lots of woods, water hazards, and bunkers to contend with during our round.”

According to Lester, the tournament is unique because all golfers will be competing directly against another golfer, with points given on a single-hole basis. Lester expects the match play to be a lot of fun for the team and is excited for the team’s four seniors— Kranz, Eichstadt, Schultz, and Elayna Kiehne (‘21)— to play the final tournament of their collegiate careers.

“Morgan, Kelly, Elayna, and Alexa have been the core of this team for the last four years,” Lester said. “It will be sad to see them go, but they are going to do some great things in the world after they graduate.”

The Central College Match Play tournament will be played on April 24 and 25. Play will begin on both days at 9 a.m.