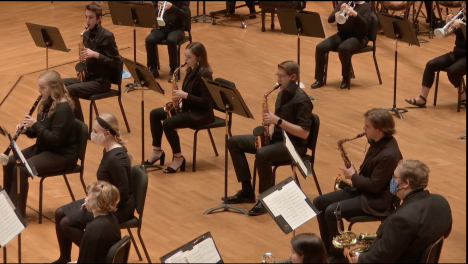 On Sunday, April 18 at 12 p.m., Luther’s wind and percussion ensemble live-streamed their spring concert for an online and limited in-person audience. They performed two pieces live, and one pre-recorded.

The journey began with “Celebrations” by John Zdechlik, which was pre-recorded. It was meant to be a regal and uptempo commemoration of Luther students making it to the end of a difficult year, opening up the concert with positive energy. Directly after, the piece “Four Grainger Songs” by Erika Svenoe featured Alumni Guest Lecturer in Music Emily Dirks (‘18) on the soprano vocal line, and saw the group stripped back to a chamber ensemble.

The final piece had the whole band return back onto the stage for a powerful final movement to close out the concert. As Visiting Professor of Music Cory Near explains, David Maslanka’s “Give Us This Day” ended the performance with a thought provoking emotional experience.

“Dr. Maslanka was very religious-oriented, very into nature,” Near said. “It’s music that makes you think. To me, it evokes a certain emotion that shakes me to my core a little bit. It’s a piece I’ve known for a number of years, [but] I’ve not had the privilege of performing it. That, for me, is the highlight piece.”

The other two pieces that were performed were also selected by Near to create a performance with variety. Near picked each piece to be unique in its sound, wanting the concert to be an active listening experience.

“We’re exploring all varieties of emotion in thirty minutes,” Near said. “It’s not just meant to be thirty minutes of ‘listen to a band concert,’ but instead take you on a little bit of a journey.”

Sunday’s concert also honored this year’s graduating seniors, like Anneliese Barton (‘21). Barton, who plays horn in the ensemble, took a moment to reflect on ending her time here at Luther on a high note.

“I don’t want this to be my last performance, because I’ve seen this band grow the last four years,” Barton said. “I’ve just seen a pretty big shift in attitude towards the band. We’re practicing with a purpose, and we’re all wanting to get better.”

Even in the face of the pandemic, and after a year of adapting to the COVID-19 mitigation protocols, the band has started to feel closer to the “new normal.” Courtney Wendland (‘23), a clarinet player in the ensemble, attributes the progress they’ve made, both musically and personally, to Near’s leadership style.

“He’s so inviting and so aware that everyone is not on the same schedule,” Wendland said. “Especially since the spring semester [of 2020] was very abrupt in how it ended, he just jumped in and took the reins. I’m so thankful that he came in.”

Despite such praise, for Near, his students have contributed much to the success of the ensemble this year. Near explains how his students have been effective at adapting to challenges thrown at them this past year.

“Everything has been fabulous, but the one thing I want to make sure gets across is how well the students have adapted to the new normal, and Wind and Percussion is no exception,” Near said. “I continue to be amazed by their flexibility and their adaptability to this wild schedule. I get no complaints, they roll with every curve ball that we’ve served them. The students are showing up and doing great work.”