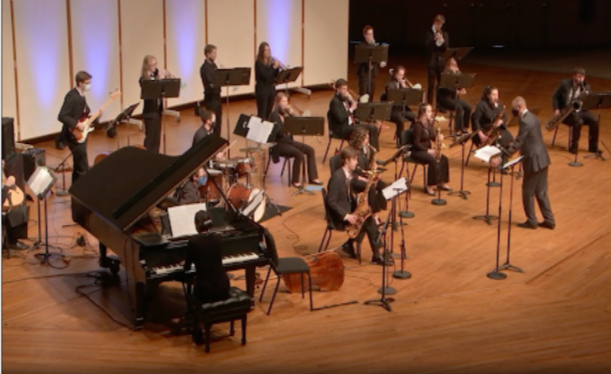 The Luther College Music Department gave online audiences a jazzy double-feature this past weekend: Jazz Orchestra and Jazz Band gave performances on Saturday the 24 and Sunday the 25, respectively. The concerts were pre-recorded in front of a limited capacity audience.

Jazz Orchestra started the weekend off with a varied set that included “Old King Dooji” by Duke Ellington, “A Night in Tunisia” by Dizzy Gillespie and Frank Paparelli, and “Caravan” by Ellington, Irving Mills, and Juan Tizol. The next day, Jazz Band brought the festivities to a close Sunday afternoon. Their set showcased a varied program, including titles like  “Spain,” “Notorious R.B.G,” and “Freedom Day,” which all featured student soloists. Both directors were very deliberate in the choice of songs they wanted to present. Professor of Music Juan Tony Guzmán (‘90), director of Jazz Orchestra, explained his approach to selecting the pieces featured on the program.

“I wanted to feature different soloists in the band, and that means within the saxophone section, everyone has a moment in which they shine” Guzmán  said. “There’s also diversity in the jazz genre, starting in the 1930’s and ending with more recent arrangements and newer approaches to jazz.”

The concert’s closer, “Caravan,” is usually found at the beginning of a set, to get the audience excited and involved. However, Guzmán decided to place the signature opener at the very end for those very same reasons. It also allowed for solos for Jazz Orchestra saxophonist Tom Altier (‘22) and drummer John Miller (‘21).

“It’s a good closer because it’s very exciting, and it motivates the audience to listen more, up until the very end,” Guzmán said. “The audience loves Caravan, and with some very exciting solos by Tom Altier and John Miller, it’s a perfect way to end.”

Adjunct Faculty in Music and Director of Jazz Band Jon Ailabouni (‘10) wanted his set to reward both the audience and band for making it to the end of an unpredictable year.

“This program is kind of full of my favorites,” Ailabouni said. “It’s been a tough year, and I just thought we need to load this program up with stuff that’s going to be fun to play, enjoyable to work on, and diverse in different ways.”

Even though entertainment was the main goal of the set, Ailabouni also made sure the performance reflected the present times, and gave a voice to composers who had a message to share.

“The song ‘Freedom Day’ is an example of a protest song in jazz, about emancipation,” Ailabouni said. “After the murder of George Floyd, I started thinking about the tradition [of] protest music in jazz, and how that body of work tends to get overlooked in academia.”

The piece “The Notorious R.B.G.” drew Ailabouni in for its hip-hop groove and obvious reference to late Supreme Court Justice Ruth Bader Ginsburg. The piece was released at the beginning of this year, and he personally spoke to composer and Berklee College of Music professor Ayn Inserto to hear what made her compose such a piece.

“Inserto is composing and thinking of her heroes,” Ailabouni said. “What Inserto was hoping for was to inspire another generation of women in jazz to be great jazz musicians and to trailblaze, just like Ginsburg was a trailblazer.”

Saxophonist Miranda Heagney (‘21) also found deep connections to the life and work of Ginsburg in the way the band performed the piece. Heagney saw parallels between the parts each ensemble member plays in making the music with Ginsburg’s fight for equality.

“In this piece, it’s very evident that each person is equally important,” Heagney said. “To me, it seemed like it connected to how RBG fought for equality for everyone.”

Both concerts featured a varied program to send a larger message to the observing audience. Though both concert programs were formed differently, each director ultimately wanted each song to keep alive the sense of community that is essential to jazz, but has been absent in the past year.

“Jazz is music that’s made in community,” Ailabouni said. “It’s not just about musicians coming onstage and playing, it’s an exchange with the audience. There’s dancing, and moving, and shouting and encouraging soloists. There’s going to be a lot of people craving that come [next] fall and [this] summer.”

Both directors believe jazz brings people together, and live performances connect musicians and audiences better than virtual performances. While Guzmán has still seen impressive maturity and motivation in Luther’s bands this past year, he recognizes the energy that performing live gives.

“When we make music we make it not just for ourselves, but essentially to share it with other people, and the more people we have, the more exciting,” Guzmán said. “Once it is safe to gather and to accomodate large audiences, once we have the community back in a routine of attending concerts, you are going to find a larger degree of motivation, even as students have still been working tremendously this past year.”

Because of the investments in COVID-19 precautions, music ensembles have been able to continue performing and sharing music. Guzmán is always eager to compliment his students on adapting so smoothly to an unusual year, but he also has tremendous respect for the administration for getting the band performing in the first place.

“As a Luther graduate and a faculty member of 26 years, I am grateful to the administration, from the president, to the dean, to the music committee handling COVID-19 regulations,” Guzmán said. “Everybody did it with a sense of mission to serve the students. That inspires in me tremendous respect.”