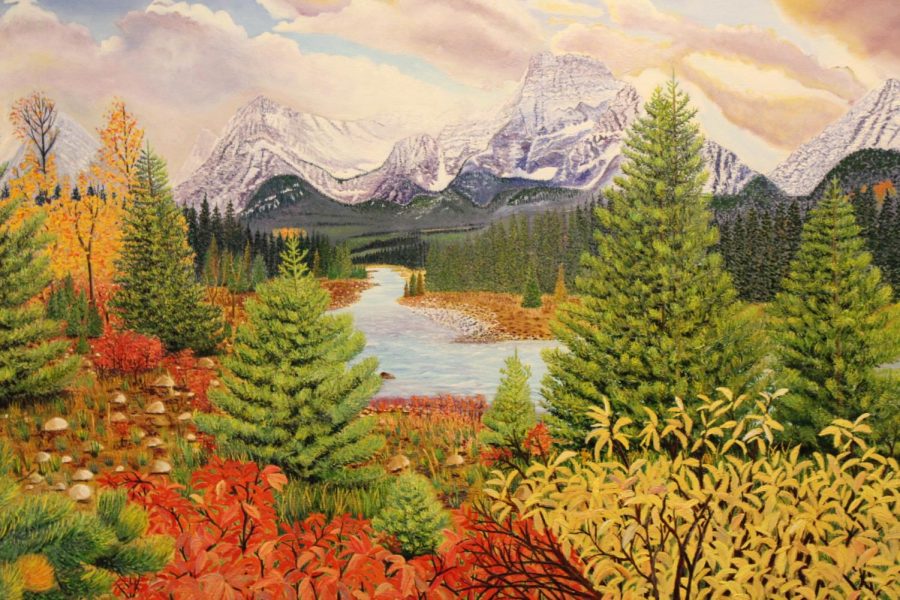 From now until October 15, Preus Library will be home to a new media installation. “Landscape and Seascape: Escaping Prison Through Art” is a series of paintings and poetry composed by the artist simply known as “Wali”, a U.S. prisoner who was held on conspiracy charges in solitary confinement for 14 years. On September 14, the Center for Ethics and Public Engagement (CEPE) and the Coalition for Civil Freedoms — an advocacy group for the wrongfully imprisoned — hosted a reception for the exhibit in the Hovde Lounge.

Wali was born and raised in Saudi Arabia to Turkistanian (modern day Uzbekistan) parents, who fled the Soviet occupation of the nation. As a refugee, Wali was denied full citizenship by Saudi Arabia, which limited his educational and occupational prospects. When the Saudi Arabian government offered to grant citizenship licenses to those who joined the military, Wali and many of his friends signed on as recruits. Wali served as a soldier for seven years, sustaining multiple injuries and participating in numerous conflicts.

In 1994, Wali inadvertently provided aid to terrorist Ramzi Yousef, a main perpetrator in the 1993 World Trade Center bombing. This association led to Wali being convicted on conspiracy charges by the U.S. government, and he was sentenced to 30 years in prison. He was extradited to a supermax facility in Florence, Colorado, where he was held in solitary confinement for the next 14 years.

“It’s a seven by twelve foot cell, all concrete, with one window four inches by four feet, and all you can see is sky,” Deputy Executive Director of the Coalition for Civil Freedoms Mel Underbakke said. “The only people you ever see are the guards, and even that is restricted. That’s life there, that was his life for 14 years.”

In 2010, Wali was transferred to a new facility, where for the first time he was allowed to access painting supplies. This reawakened Wali’s interest in the creative arts, and he began to engage with the artistic materials allowed to him.

“The anxiety and stress of prison life was getting less with every beautiful landscape I painted,” Wali said in a comment written for the installation. “We were always looking for paintable photos everywhere, and it was nice to see the smile on the faces of the fellow inmates and guards when they saw an overnight wet-on-wet painting that they liked very much and were surprised to see staring at them in the morning.”

At the time of publication, Wali has completed his sentence, and is currently being detained by Immigration and Customs Enforcement (ICE) awaiting deportation.

“[Wali] is a homeless person, because he doesn’t have citizenship anywhere,” Underbakke said. “The daughter and grandkids he’s never met are in Saudi Arabia, but they won’t let him come there, so we don’t know what will happen to him. He has told me that one of his dreams is living on a sailboat and painting when he gets out, and you’ll see it when you look at the paintings. He’s also hoping people will write to him.”

Wali’s works were brought to the Luther community by the CEPE. CEPE Director Victoria Christman, Assistant Director of the CEPE Krista Holland, and Associate Professor of Religion Todd Green decided at the end of the 2021 spring semester to put together some campus programming to commemorate the 20th anniversary of 9/11. During that process, they approached the Coalition for Civil Freedoms organization, at which point Underbakke offered to facilitate the transfer of the collection to Luther College.

“I think that seeing the works of this man really humanizes the experience of incarceration,” Christman said. “I personally feel that they are a real example of hope for the human spirit. When [Wali] came out of solitary confinement after 14 years, first, he somehow wasn’t insane, but [his] pictures are so vivid and joyful, that all of that positive energy was inside him, even in the depths of the most awful experiences – the humanity that that demonstrates is good for everyone to witness.”

For the remainder of the time that the collection is on campus, Luther community members will be able to contribute to a guest book for Wali, which will be on display at the site. Wali’s mail address is also available to those who wish to send him any correspondence. The collection will be on the wall outside of the Hovde Lounge until fall break, at which point it will be transferred over to Wali’s daughter.

“It was moving, and I almost don’t have words for it,” Spencer Gillian (‘23) said. “I think it reminds me that art is one of the most powerful ways in which we can escape our surroundings. I would highly recommend seeing it.”