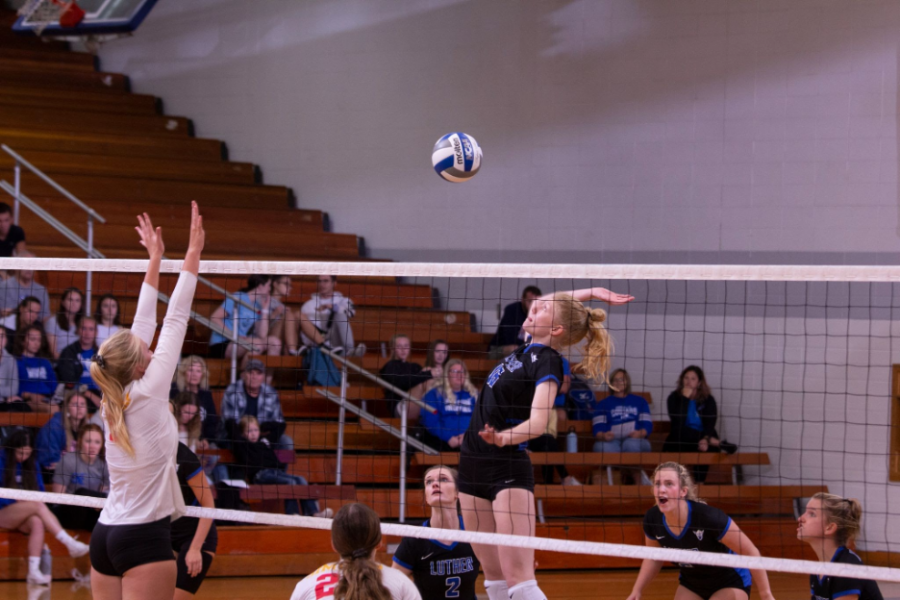 Luther middle blocker Hannah LaBonte (‘25) jumps up for a swing during a match against Simpson College on September 21. (Photo courtesy of Luther College Photo Bureau)

This match marked the 53rd meeting between the Norse and the Storm, and the first time the Simpson women’s volleyball team has swept a league rival since their defeat of Central College in 2018. After playing Simpson, the Norse went on to play St. Norbert College and the University of Wisconsin – Platteville on Saturday, September 25. Luther lost both matches 3-0.

“We did it to ourselves; it wasn’t necessarily a lack of skill or ability,” Poetker said. “We made errors that were completely in our control, that then affected the outcome [of the match].”

The Storm and the Norse were nearly equal in total kills, with Simpson hitting 37 and Luther hitting 35. The assist count was also even, with Luther recording 32 assists and Simpson recording 30. Both teams recorded 35 digs. Luther setter Grace Meyers thought her team played really well, but acknowledged that the Norse were outplayed by the Storm.

“We did a really good job at defense in this game,” Meyers said. “We set up our hitters to have a good opportunity to score, but the main reason [Simpson] won was because they kept their foot on the gas and we let off a bit.”

Luther outside hitter Grace Hall (‘22) had a different opinion on the game, saying that questionable calls made by officials in the third set had a large influence on the outcome of the match.

“There were some pretty cruddy calls [that were made] while the scores were close near the end,” Hall said. “I think if those calls went a different way [Luther] would’ve had a chance to play a fourth set and improve things.”

Luther’s next game will be an ARC matchup against Wartburg College on Wednesday, September 29 in Waverly, Iowa. The match will start at 7:30 p.m., and will be live streamed on the Wartburg Athletics website.