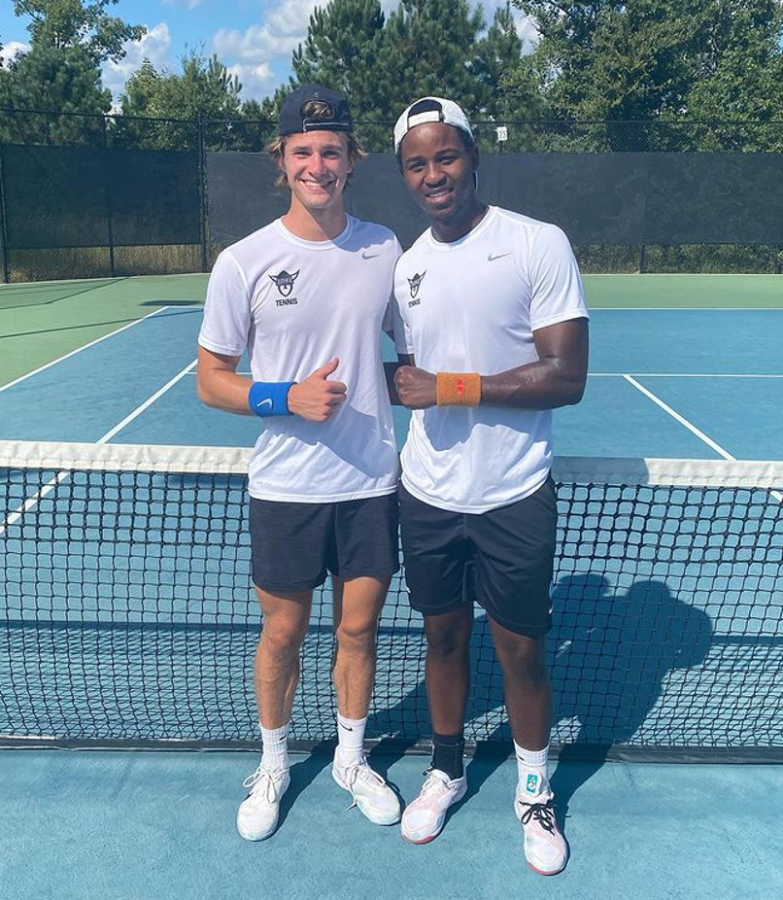 Luther men’s tennis players Max Loen (‘24, left) and Nyathi Motlojoa (‘22, right) recently finished in second place at the ITA Midwest Regional and advanced to the ITA Cup, becoming one of the top 12 doubles teams in all of Division III. (Photo courtesy of @norsetennis on Instagram)

Luther men’s tennis players Nyathi Motlojoa (‘22) and Max Loen (‘24) recently advanced to the 2021 Intercollegiate Tennis Association (ITA) Cup, which ran from October 14-17 at Berry College in Rome, Georgia. The doubles team qualified by finishing second at the ITA Midwest Regional tournament on Oct. 3. At the ITA Regional, Motlojoa and Loen won four of their five matches, losing only to UW-Whitewater in the championship match.

How did you get started playing tennis?

Motlojoa: I started playing tennis when I was about four or five years old. I had a brother who was two years older than me, and he started playing earlier than I did, so it was kind of an easy transition to follow in his footsteps. My dad introduced the sport to us, and we both fell in love with it.

Loen: I started playing tennis in middle school, some of my cousins were big into it. We were pretty good friends, and that’s where it started. I had a coach who started giving me private lessons, and I give a lot of credit to him.

Why did you choose to play tennis at Luther?

Motlojoa: I transferred in my sophomore year from [Seward County Community College] in Kansas, and there was a guy on the team here at the time from South Africa that I knew from back home. I got in touch with him, and he got in touch with the coach. I thought Luther had a lot to offer, even besides tennis, so that’s how I ended up deciding to come here and play.

Loen: I thought Luther was the best opportunity to make a run like this. I have good teammates, we have good coaching staff and just overall it’s a great place [for] athletics.

What was it like to compete in the Intercollegiate Tennis Association (ITA) regional tournament?

Motlojoa: To be honest, I didn’t know what to expect because I [hadn’t] competed in this tournament [for] two years now, but I knew it was always super competitive. I went into it trying to have fun, it was going to be my last, so I didn’t put too much pressure on myself. I played to the best of my potential, and I’m glad it turned out the way it did.

Loen: It was pretty stressful at first, but honestly it was very exciting. Everything kind of started to work out, we started winning. It was a lot of pressure, but once it was all said and done I was very satisfied and happy with the results. Nyathi and I played very well, we both connected, and it was a great thing for the school, department and the team.

What is a moment from any of your five ITA regional doubles matches that stands out to you, and why?

Motlojoa: After we played Coe College, and we were about to play Carthage, I was talking to Max, and he was telling me how nervous he was in the previous two matches. I have had a lot of success in doubles with a different partner, so Max felt like he had big shoes to fill, but I told him ‘We won two matches already, just build on that confidence, we belong here, just have fun with it,’ and from then on his mindset changed. He was just super positive, like he could make it all the way through. I think that was the turning point, because if we had not had that conversation, it would have just been going through the motions and the matches. Having that genuine, heart-to-heart conversation helped us to believe in our achieving a lot more than we thought we could, especially given that we’d never played together before, prior to the tournament.

Loen: The last point in the semifinals [stands out], we won that point to win the match. I just remember my partner [Nyathi] served it, they hit it up, and we both just watched it fly up in the air and just hoped it landed out. It did, and I saw Nyathi just jumping up and down, screaming. That moment will always stick with me for the rest of my life for sure.

What is your favorite thing about the Luther tennis team?

Loen: The culture of our team. Everyone gets along, everyone will hit with anyone. We are very proud of our classiness, our personality. We all hang out, and are all friends. It’s just a great atmosphere. I can’t thank my teammates enough for all of the support and everything that they do for me and the team.

Motlojoa: I think there is a sense of brotherhood that I haven’t felt anywhere else in a team setting. We care a lot about each other, on and off the court. It’s more than just tennis, it’s the friendships that we have within the team, the sense of community. The coaches care about the players more than just on the court. It’s a really welcoming feeling.

Who is someone you admire, and why?

Motlojoa: My dad was the one who introduced me to tennis. He was my only tennis coach up until the age of 18, when I left for college. Every match I go into, I always talk to him prior just to get some advice. He’s always been by my side, so I still feel like he’s there, even when he’s not there physically. I always try to make him proud, he inspires me a lot. He’s definitely the person for me.

Loen: My dad, honestly. He didn’t really have a tennis career, but he played professional hockey, and his motives in sports and his way of doing things, his mindset, has always really helped me. He’s someone I’ve looked up to all my life, and it’s really helped me become the athlete that I am. He has it all for me, he’s always been there.

What does it mean to you to get the opportunity to compete in the ITA cup?

Loen: It’s a dream come true. I chose Luther because I thought it was the best opportunity to compete at epic stages. It means a lot to me to play with Nyathi, such a great guy, a great player, and a great friend of mine. I’m so excited to see what we can do, and our goals are set high.

Motlojoa: I don’t think I’ve wrapped my head around it yet, it still feels unreal, especially because I played in this tournament two years ago with a different doubles partner. Just making it again, it feels like a deja vu moment. It’s really exciting, to say the least.

As for the rest of your season and tennis career at Luther, what are you looking forward to?

Motlojoa: We have a really long spring season coming up, and we have a lot of high expectations for the team. The conference tournament [is in the spring], and after that we would go to nationals. I will hopefully qualify for the NCAA individual nationals as well. That would be the goal for now, if that happens or not I will still be happy. I want to have fun with my last year, to make sure I enjoy it – the traveling, the playing, the fan moments, the letdowns, the ups – just try and take it all in in the moment, just so when it’s done I don’t wish I’d done it any differently.

Loen: I want to see what I can become as a player, and a leader as well. We are heading in good directions, and I want to have more experiences like this. For now, I’m going to soak it all in and enjoy the moment.

How has being a college athlete impacted your experience at Luther?

Loen: It’s made it difficult in a way to focus on school. Especially with so many exciting things happening, school can kind of fade to the background, but I think it’s really helped me grow as a student. I’ve learned to manage my time, and realize my priorities. When something is in the background, but it’s actually important, you learn to focus and become a stronger person. Motlojoa: More than anything, it’s the learning aspect of it, and finding a balance between academics and athletics. It just prepared me a lot for after college, just because having that much on my plate can be challenging at times, but I think the fact that I’ve made it means I’ve done a good job up until now. It’s nice being involved in two different things on the same campus, being around different people at different times; that helps build more relationships and a deeper connection to the campus itself. It’s been a really good experience.