Luther baseball team to play on the “Field of Dreams” 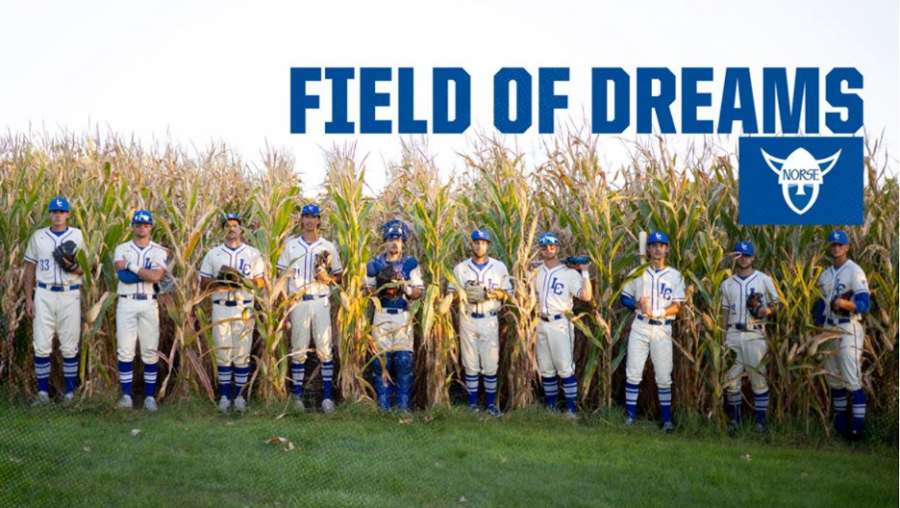 Members of the Luther Baseball team pose in a promotional photo for their future game at the Field of Dreams against Briar Cliff University on September 22, 2022. (Photo courtesy of Luther Athletic Department)

After a late Friday practice, Luther baseball Head Coach Brian Nikkel called the team into the turf room at the Regents Center for a meeting.

“Everybody was like, ‘it’s Friday, I wanna go home’ so we all walked into the turf room together, and [Nikkel] was still harping on guys like ‘no phones, no phones’ and so all the sudden there’s a murmur among the guys about all the things this could be,” Patrick Fontaine (’25) said.  “He threw a video up on the screen. We knew about this hype video because guys had to go record it, but we had no idea what it was for. All of a sudden, the ‘Field of Dreams’ pops in, and it just went absolutely berserk in there.”

On October 1 the team learned that Luther baseball would be playing in the very first collegiate game at the “Field of Dreams” movie site in Dyersville, IA. The game, which will be held on September 16, 2022, will see the Norse face off against the Briar Cliff University Chargers of Sioux City, IA. Briar Cliff secured this opportunity and invited Luther to be their opponent in the game. While the game will be held during the Fall 2022 semester, all current Luther seniors have been given the opportunity to choose to return and play for Luther during the “Field of Dreams” game.

Luther baseball player Sam Eng (‘24) says that the planned game versus the Chargers at the Field of Dreams is now a major event for the team to work towards.

“We want to be really good [at the “Field of Dreams”], and in order to do that we need to show up every day and work our butts off,” Eng said. “[The game] is a reward, but also a motivation to continue to get better.”

This will not be the first time baseball has been played at the famous field. In a Major League Baseball (MLB) regular season game this past August, the Chicago White Sox defeated the New York Yankees 9-8 via a walk-off home run in the ninth inning. A future MLB game between the Cincinnati Reds and the Chicago Cubs is planned for 2022.

The game between the White Sox and Yankees was played at a stadium constructed near the site because the original field could not be brought to MLB game standards, but when the Norse and the Chargers take the field they will be playing on the legitimate, historical movie site.

“Playing on the ‘Field of Dreams’ is something our players probably never thought they would get the chance to do,” Nikkel said in a statement released by the Luther Athletics department. “As they run out onto that iconic field and feel their spikes dig into the dirt, this game will undoubtedly bring out emotions and bring them back to the reasons they play baseball, a sport that has created so many opportunities for all of us.”

The movie “Field of Dreams” came out in 1989 and starred Kevin Costner as Ray Kinsella, an Iowan farmer who builds a baseball field in his cornfield despite the financial hardships it may cause him. It became a 1990 Academy Award nominee for Best Picture, and in 2017 was added to the United States National Film Registry by the Library of Congress for being of cultural, historical, and aesthetic significance. The film is currently in the process of being remade as a television series, which will be written by Michael Schur and released on Peacock.

“Field of Dreams” features significant themes of familial relationships, especially those between fathers and sons.  The film has enjoyed enduring popularity and has proved influential to many Norse players, such as Peyton Lindmark (’24).

“I grew up watching the movie a lot as a kid, and everybody knows that one scene where [Kinsella and his dad] are playing catch on the field, it’s a pretty emotional part of the movie,” Lindmark said. “Everybody’s got that connection to it, just [because of] their dad or grandpa or whoever might have taught them the game.”

While anticipation is running high within the team, the Luther community will have to wait until the fall of 2022 to see the history-making game. Ticket availability for the game will be announced at a later date.