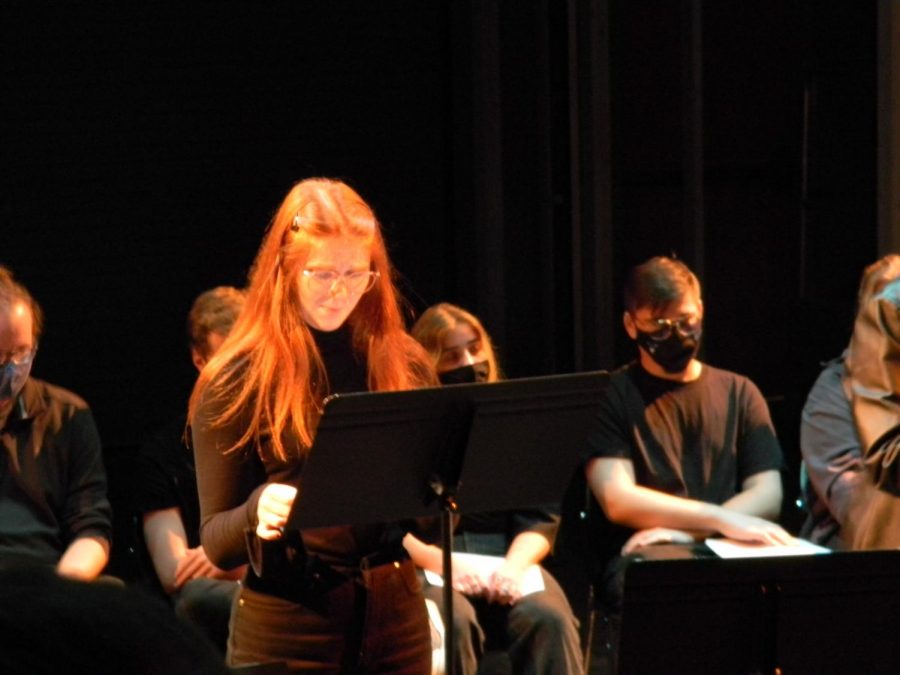 On Thursday, October 6, Jewel Theatre hosted a performance of The Underground Radio Theatre of the Air. Originally conceived as part of this year’s Theatre 300 class, the production included a series of three one-act plays, “Fourteen,” by Alice Gerstenberg, “The Boor” by Anton Chekov, and “Why Cupid Came to Earl’s Court” by Cosmo Hamilton. All written between 1888 and 1919, the dramas were thematically related, but had different cast members and plots.

Paying homage to the golden age of radio performance, each one-act relied entirely on sound effects and voice acting to transport the live audience members of Jewel Theatre into the world of the characters. A line-up of actors stood and gave their vocal performances, while a table full of props — from phones to chimes to a stage door — acted as the night’s sound effects. For audience members, it can be disorienting to listen to a dramatic performance instead of watching it unfold on a full stage.

“When it first started, it took a little bit for me to catch on to the format,” Marshall Laidlaw (‘24), an audience member, said. “In that first [play], the first little bit I wasn’t totally connected to, so it took me a second to get into the mode of listening.”

Transporting the audience into the world of the characters through the medium of radio drama posed a unique challenge for listeners and actors alike. For cast members, telling a story with only voice and sound effects meant that special attention had to be paid to creating a character. Unlike embodied characters on stage, in which costuming and emoting can be done through physical elements, actors must rely completely on their own vocal inflection to create a character. Linny Briggs (‘22), a Theatre 300 student, acted in “Fourteen” and co-directed “The Boor.” She spoke about the differences between stage and radio acting when it came to vocal control.

“It’s very different, it shouldn’t be very different, but it is,” Briggs said. “The main difference is way more inflection. You don’t have to move people around, and nobody has to [memorize] any lines. It’s all about inflection in the voice and pausing for sound effects and characterization.”

The cast only had four rehearsals to overcome those unique difficulties before performing for Thursday’s audience. Participating in this performance gave cast members an opportunity to focus on their vocal acting. Camryn Berg (‘22) performed as the radio announcer, and used the position to practice her accents.

“I tried to do a Mid-Atlantic accent [for the announcer] and it did not work,” Berg said. “So, I ended up deciding to go with the classic MPR style announcer voice, but to put more inflection of an old-timey radio announcer.”

Though the show didn’t actually go out over the airwaves, the directors and cast of Underground Radio Theatre of the Air charmed their audience, transporting them back to a time when speakers and a dial were the height of entertainment.