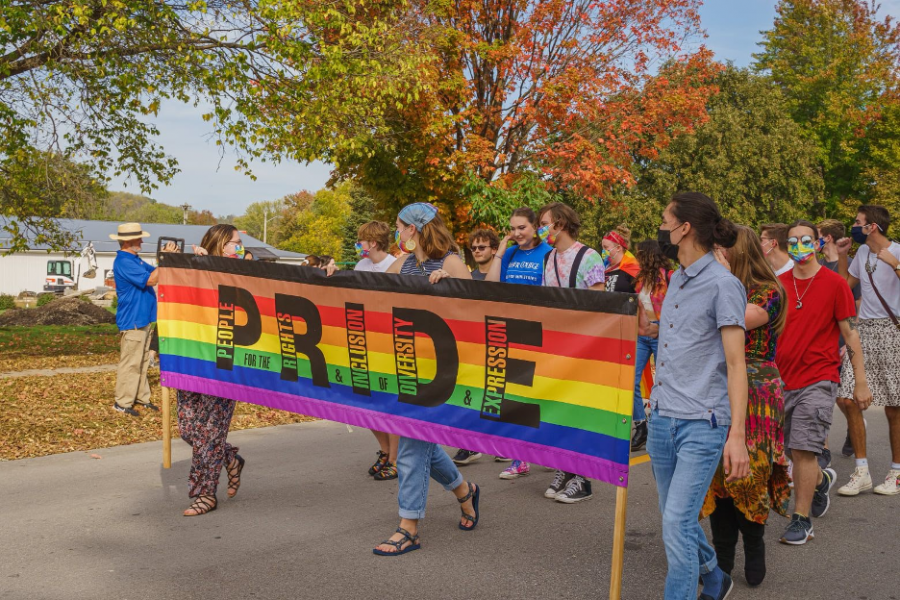 Members of Luther PRIDE in the Decorah Pride Parade. (Photo by Charlie Langton)

Over the weekend of October 6-9, Decorah hosted the annual Pride Festival, bringing together the LGBTQIA+ community and allies from across Decorah to celebrate all Queer identities.

The Decorah Pride Festival featured a multitude of events sponsored and planned by the Decorah Pride Committee in partnership with local vendors. In accordance with ongoing COVID-19 safety recommendations, all activities were reformatted in order to maintain the health and wellbeing of all participants. While the pandemic altered some of the initial plans for Decorah Pride, Associate Professor of Philosophy and Identity Studies and Co-Chair of Pride Parade Holly Moore made clear that it was necessary for the festival to go on.

“One of the most important things about Decorah Pride, to me, is that it helps LGBTQ+  folks to see that they’re not alone, and that we are here for each other,” Moore said. “I think that’s especially important for young people, but also for anyone who feels marginalized because of their identity. Personally, Decorah Pride has given me a very strong sense of belonging in this community, which I didn’t have before.”

The festivities started on October 6, when local creative studio ArtHaus hosted a reception for a new exhibit that features the rainbow spectrum quilts of Decorah resident and award winning quilt-maker, Mike Ellingsen. The exhibit will remain at Arthaus until October 31. The next evening, October 7, Impact Coffee offered an LGBTQIA+ themed trivia event, where participants were invited to demonstrate their knowledge of significant cultural and historical facts about Queer folk. A team comprised of members of Luther’s Queer Theory course won the game.

“It was a couple of students and our professor [Moore],” team member Laura Wyre (‘23) said. “It was a good time for all of us, to get out of the classroom and hang out outside of that. I have taken a lot of different Queer-focus classes – I wish there were more at Luther, but we’re getting there– but I have really enjoyed [PHIL-485: Queer Theory]. I’m a Queer person, so its really nice to learn about the history and what it means to be Queer.”

The weekend kicked off on Friday night with the back patio drag show at Convergence Ciderworks. Tickets sold out days in advance, with the funds going towards ArtHaus and other local creative opportunities. Featured performers included the Iowa Queens and other locally affiliated drag kings and queens.

On Saturday, the Decorah Pride Parade down Water Street started at 3:00 p.m. All individuals and groups were invited to join the parade, so long as they registered in advance. Onlookers cheered participants on from the sidewalks as they passed by, voicing their support for the LGBTQIA+ community.

After the parade, community members were invited to keep the celebration going at the “Party in the Park(ing Lot)”. The event highlighted a variety of community speakers, as well as musician Namoli Brennet, and took place in the parking lot behind the northside of Water Street. The festive nature of the event was heightened by the presence of several local vendors and caterers.

Saturday evening rounded out the Pride programming with a happy hour event at the local pub, Your Place, and the Pride After Party at Pulpit Rock Brewing. The party was exclusively for the 18+ crowd, who enjoyed dancing to various songs and Queer anthems. To honor the occasion, Pulpit even created a new beer brew that included edible glitter.

Following the conclusion of the 2021 Decorah Pride Fest, Moore reflected on the intentions and goals of this annual event.

“In the short term, we want the whole Decorah community to have the chance to embrace our mission: ‘to unleash fabulous creativity.’’ Moore said. “In the long term, we hope to empower LGBTQ+ community members to be leaders in our community, to mentor our youth, and to create a more inclusive and affirming community. We’ve already seen a strong increase in the visibility of LGBTQ+ folks in Decorah, and this has allowed us to connect with each other in important ways. Regionally, Decorah is becoming known as a community that is supportive of LGBTQ+ identifying folks.”

For those who missed out on this year’s Pride celebration, planning for Pride 2022 is already underway. For those who are interested, the dates will be announced on the Decorah Pride webpage and social media in the near future, where the volunteer link can also be found.