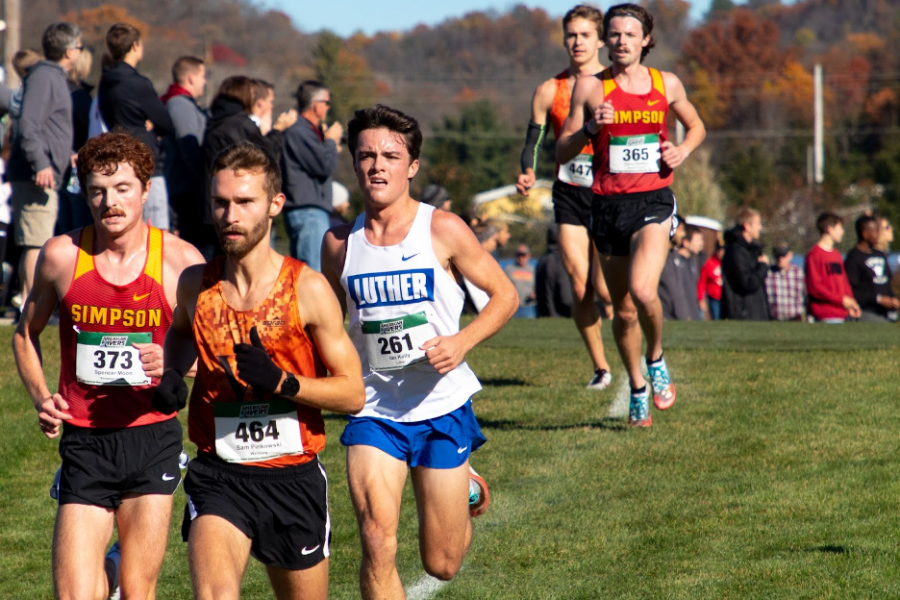 Kelly, with his time of 25:49.7, led the Luther men as the team finished fourth overall, while the Luther women finished sixth. This race was the third time that Kelly has achieved All-Conference honors, becoming the 23rd Luther runner to achieve that feat.

“Being named all-conference means a lot to me,” Kelly said. “It shows off all the hard work I have been putting into running this season and throughout the summer. I wouldn’t be in the conference without my teammates and coaches pushing me to do my best.”

One advantage that Luther had going into the championship races was competing on their home course . The course is seen by some runners as difficult, so many Norse competitors knew their familiarity would serve them well.

“Racing at home is always exciting, and one of the main challenges is controlling that energy,” Ryan Rogers (‘22) said. “Because this was such a major race, it’s easy to get wrapped up in the excitement and start the race too fast, ruining your chances of finishing strong. However, if you can take the first half of the race smart, home meets can be the perfect place to run personal bests.”

According to runners like women’s team member Berit Skogen (‘23), this season has been tough for cross country team members who have been dealing with injuries and other challenges. She felt there was a big payoff in getting to run a major race in front of a home crowd.

“A lot of us took this opportunity to race and pulled through in some awesome ways,” Skogen said. “We executed our race plan of working up through the field in the second half of the race, and our results showed that.”