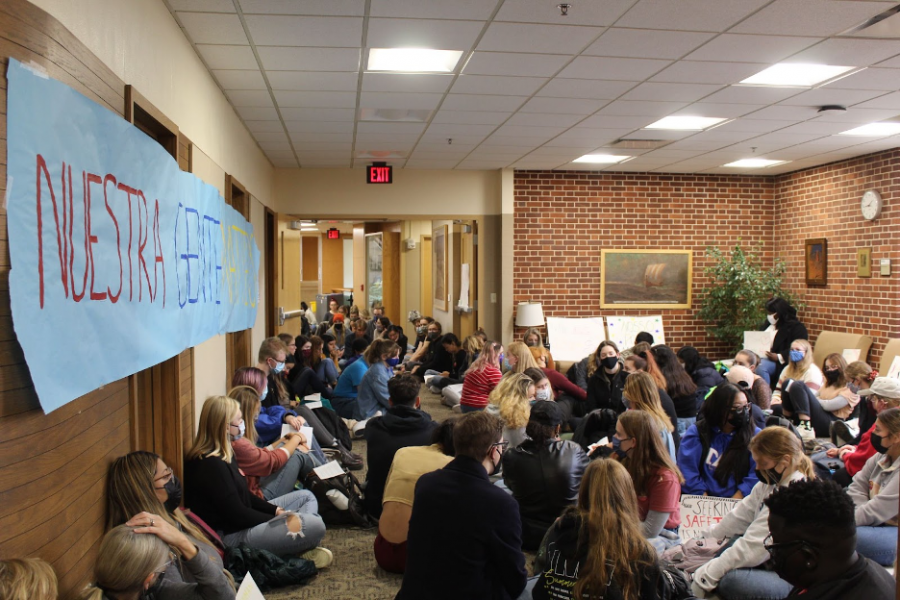 Students gathered on October 27 on the upper floor of Dahl Centennial Union over a hateful message left in the Hostile Terrain 94 exhibition. Photo courtesy of Olivia Schmidt.

On October 27, the upper floor of Dahl Centennial Union was filled with students and faculty alike, who had gathered in protest of the administration’s silence about a hate act committed in the Hostile Terrain 94 exhibition before fall break.

The silent protest was organized by a variety of individuals and student groups on campus, with responsibility for the event eventually being taken by Latines Unides, who publicized the protest on their social media as “We Matter: Nuestra Gente Matters.” They also provided handouts and other materials to attendees, conveying the purpose of the protest and its demands to the administrative board, including President Jenifer K. Ward, who was in attendance.

These objectives included the demand for annual, mandatory anti-racism training for staff and students, open and public acknowledgment of the vandalism from Luther, the introduction of a Latin American studies program on campus, a transparent investigation into the bias incident, and greater representation of LatinX persons in faculty and administrative roles. The organizers also petitioned to accelerate the process of hiring someone to fill the Chief of Diversity, Equity, and Inclusion position.

“We want something to be done about this,” President of Latines Unides Evelyn Montoya (‘23) said. “We want the campus to [say] ‘Okay, this is an attack on a community that has a background of either having immigrant parents or family members that have crossed the border.’ I don’t think [people] understand, they see it as someone sharing an opinion, but you’re basically telling students that they don’t belong here, in a country that directly benefits from immigrants. This is how America was brought up. There is so much trauma and history that people need to be educated about, which we talked about in our demands.”

The hate act that sparked the protest was discovered on October 13 by a student observing the exhibit. The toe tag, which is meant to symbolize an undocumented immigrant’s death in the Sonoran Desert while attempting to cross the border, was prominently featured with the backside up, on which someone had written a note. While those who have participated in the construction of the installation are encouraged to write messages of love and grief on the card, this was a message of harmful rhetoric involving U.S. immigration policies in the U.S. A Bias Incident Report was filed.

The curator of the exhibit, Manager of the Anthropology Lab and Collections and Professor of Museum Studies Destiny Crider, was notified of the vandalism, and on Friday October 22 informed attendees of the “Who is Dayani Cristal” film screening & Hostile Terrain 94 exhibit tour about the incident. At the time, Crider had taken down the offensive tag from the main exhibit, and displayed it in isolation with a statement condemning the views expressed and the inappropriate way in which they were shared. This aspect of the exhibit has since been removed, as many students voiced their discomfort with the message being amplified in any capacity.

“My intention was to make visible the harmful act and be transparent about its occurrence,” Crider said. “Now that it has been submitted via the Bias Incident Report, the occurrence has been brought to light and submitted for investigation. I feel that displaying that item would continue to cause hurt and harm. I am taking the next steps to develop educational material that will be provided in the exhibit space that will explain the complexity of U.S. immigration law.”

Over that weekend, many students gathered in various organizational meetings to discuss the incident, and by Sunday plans had been solidified to stage a protest. On Monday, October 25, the plans were shared with the broader campus community via social media and official statements from several different student organizations. Participants gathered outside of the president’s office and career center starting at 1:30 p.m. The silent reflection portion of the protest lasted for half an hour, after which different student leaders presented prepared statements. The event concluded with a question and answer session.

“I usually have lower expectations, sadly, with these things, especially at Luther, but I am proud of our student body and how [the protest] went,” Sarah Edgington (‘24) said. “We felt inclined to do a protest as a last resort because we haven’t been seeing support from our administration. We wanted to make our presence known. From this point on, I expect that [the] administration will partner with us and will work with us and fully support us. If they do not, then further action will be taken. I hope that it doesn’t get to that point, but this is only step one.”

Ward herself did not elect to comment for this story, and redirected requests for comment to Provost Lynda Szymanski and Vice President for Mission and Communication Brad Chamberlain, who jointly issued a statement to CHIPS regarding the protest.

“The administration is committed to collaborating with students to understand and address their concerns. Senior leaders are reviewing the demands and will work with student leaders to determine next steps. Senior leaders will also help to make connections between the student leaders and the faculty curriculum committee regarding those demands connected to the curriculum.”

Two days after the protest, an email was sent out to the campus community from Szymanski and Chamberlain, which served as the first public acknowledgement of the hate act by the administration. The email also confirmed that an investigation into the incident is currently underway.