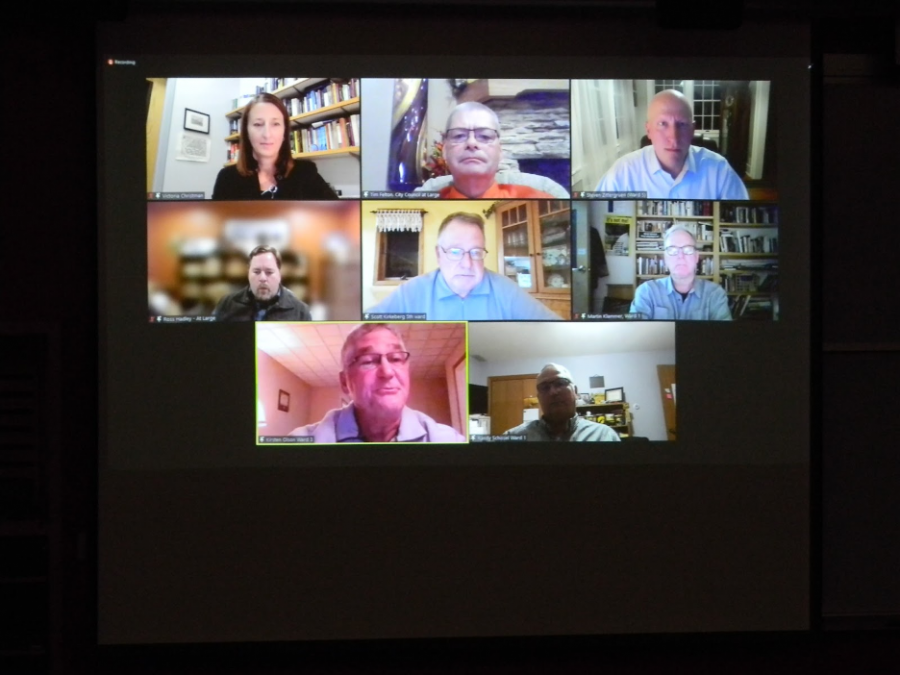 A forum for the Decorah city council and school board elections was hosted by the Luther Center for Ethics and Public Engagement on October 27. Candidates for city council positions included Ross Hadley (‘95), Tim Felton, Professor of English Martin Klammer, Randy Schissel, Kirsten Olson, and Scott Zittergruen. The candidates for school board positions included Ronald Fadness, Cindy Goodner, and track and field coach Doreen Fullhart. All were present at the forum, which was moderated by associate professor of History Victoria Christman. The ninety-minute forum, which took place over Zoom in Valders 206, introduced the candidates and their key issues, and also allowed questions from the public.

Many city council candidates spoke about the necessity for affordable housing to be created in the area and their plans for how to achieve that goal. At-large city council member Hadley commented on what has been done so far to address the state of affordable housing in Decorah, as well as what he sees as possible solutions to the crisis.

“The term, ‘affordable housing,’ is very difficult to define because the cost of real estate is quite high [in our community],” Hadley said. “The economic development committee of our current council has been working with an investor group, who has a local component of people who are willing to put up to 13 million dollars into affordable workplace housing in downtown Decorah. It can be a reality. It could be a walkable, bikeable, downtown workforce housing development.”

While other candidates responded to this plan with varying degrees of acceptance, many of them agreed that the housing issue was a major concern. For some Luther students, the affordable housing conversation was especially poignant. Rachel Clennon (‘22) lived in Decorah this past summer and was happy that the issue of affordable housing was addressed in the forum.

“I’m glad affordable housing was brought up because I lived in Decorah this summer, and I got a quick peek into how expensive and hard it is to live here affordably,” Clennon said. “I lived in an apartment that was 630 dollars a month, and it was still more expensive than nicer apartments. Housing is just inequitable in this town.”

Affordable housing was not the only issue that concerned Luther students. During the school board forum, the candidates were asked whether they supported vaccine requirements for students to attend school. Ron Fadness, who is running for re-election in Decorah’s second district, supports vaccine requirements, and explained that vaccine mandates are nothing new.

“We have always had, since the 1950s, vaccine requirements for different things,” Fadness said. “Personally, I see no difference in the COVID-19 vaccine, but I am well aware that this is of tremendous concern to a great [number] of people. That’s why the policy that I proposed, and we adopted last year, is that once all students have had the chance to be vaccinated, we will get rid of the mask mandate.”

Because of the public controversy over vaccine mandates, candidates toed this conversation cautiously, but all of them echoed that a mandate was not a part of their plans. Maddie Davis (‘22), who is a current Luther student and plans to vote in the upcoming election, was glad to hear vaccine mandates being addressed by the local candidates.

“Hearing the opinions on vaccine mandates was interesting,” Davis said. “That’s definitely something that, as vaccines become fully available to students, will be an area of concern. I’m glad that somebody asked so we were able to see how they responded to that, because I think that will be very important coming up.”

Events like the candidate forum discussion provide background information on candidates and how their opinions and ideas are likely to affect the community they may be elected to serve. As the Decorah school board considers their vaccine policies, the policies they end up pursuing will have some effect on the Luther campus. Clennon believes that because of this, local elections should matter to Luther students.

“Especially because of how close the past few local elections have been, some within the margin of four votes, it’s important for a small community like Decorah to have as much participation as possible, with that participation backed by education,” Clennon said.

The forum livestream was recorded and is available to watch on YouTube.