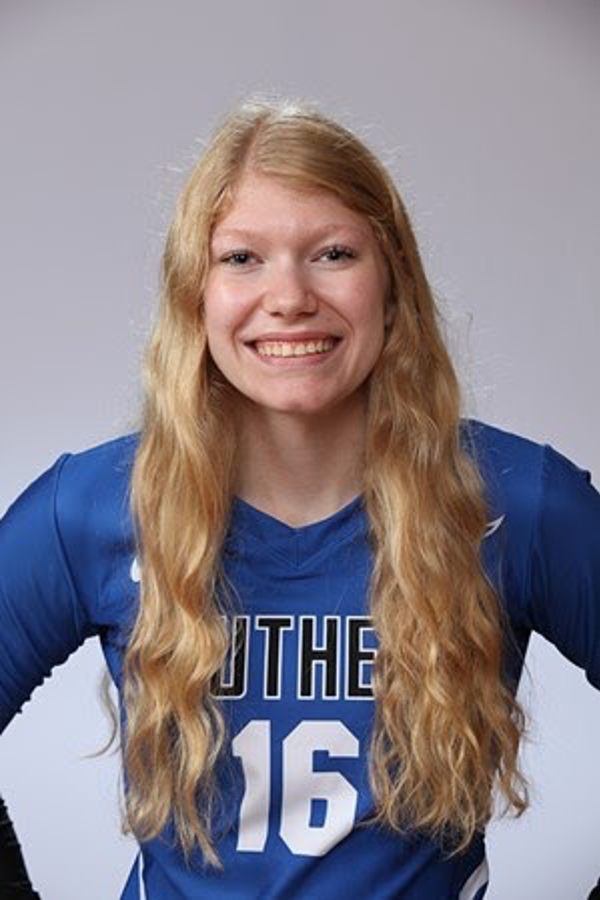 This week’s Norse of the Week is volleyball team member Sarina Stortz (‘24). Stortz plays as a middle hitter for the Norse, and led the team in total kills and blocks for the season with 221 and 53, respectively. Stortz finished the regular season ranked top-20 individually in the American Rivers Conference in the same categories, earning All-Conference honorable mention honors in the process. Stortz’ prowess on the court was in fine form during Luther’s final match of the season against Grinnell College: Stortz hit 16 kills in the five-set loss against the Pioneers, a season high.

When did you start playing volleyball?

I actually started playing in second grade. My high school coach pushed me to be the best player I can be, [and] he was definitely my role model throughout.

Why did you choose to play volleyball for the Norse?

I chose to play for the Norse because the team was really welcoming. I actually transferred from [Augsburg University in Minneapolis, MN] last year. I was on the team there, but it was not a great fit. I came [to Luther] for a visit, and I met the team. They were really great, and I loved the coaching style.

Who is your favorite athlete?

I love watching the [University of Minnesota volleyball team] play, so I definitely look up to those players.

What motivated you to play so well in the Grinnell match?

It was the last game of the season, and I wanted a good last game. That is truly what motivated all of us.

What was your favorite moment from this season?

Definitely the games that we won. There were only a few of them, but the winning mentality of it, I loved that part. Also just being with the team, that’s always the best part too.

What are your plans for the rest of the year?

I want to work harder in the off season. With the spring season coming up, we just have to capitalize on our momentum for the next season.

What is your favorite thing about the Luther volleyball team?

We are just so close and we have so much fun together. We always push each other to be the best that we can be.

Who inspired your volleyball journey?

My family is literally at every game, and they have supported me throughout this entire journey.

What is your goal for next season?

To play together and win more games. I believe that we can do this, we have the athleticism in the team, we just need to apply it better. I feel like in the off season, it’s what’s going to be the most important to having a successful next season.