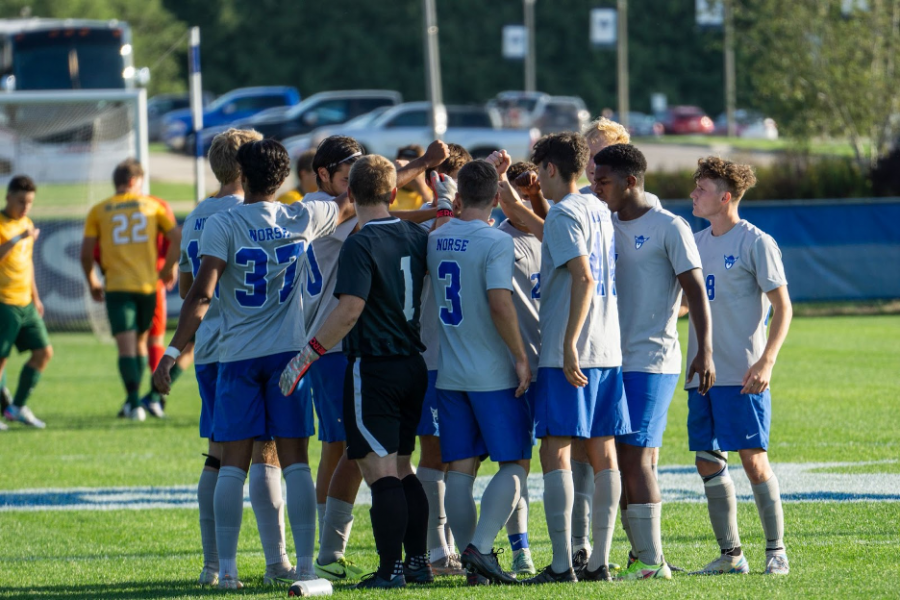 The Norse were eliminated from the American Rivers Conference Tournament after a 4-0 loss to the University of Dubuque. (Photo courtesy of Luther Photo Bureau)

In a semifinal matchup of the American Rivers Conference Tournament, the Luther men’s soccer team was defeated by the top-seeded University of Dubuque 3-0. The game was scoreless until the second half, where Dubuque scored three goals in the last 13 minutes of the game to advance to the championship match for the first time in six years.

Luther Men’s Soccer Head Coach Chris Garcia-Prats noted that the first hour of the match was very tightly contested between the Norse and the Spartans.

“I wouldn’t say there were a ton of chances for either team,” Garcia-Prats said. “We had a couple in the first half and so did they; I felt that 0-0 going into halftime was a fair score.”

Dubuque scored on a counterattack in the 66th minute to go up 1-0, and then expanded their lead four minutes later in the 70th minute to 2-0 off of a set piece.  Luther had chances to score off of shots from Fel Alvarez Casaro (‘23) and Marcos Vila (‘22), but both were saved by Dubuque goalkeeper Christoffer Rastock (‘25). Dubuque eventually secured the match by scoring from a set piece again in the 79th minute, expanding their lead to 3-0. Luther defender Raul Ferrandez (‘25) noted that in the second half, the Norse lacked some of the strategy that made them successful at many points throughout the season.

“As a team, we have lots of players from all around the world that have different ways of playing [and] when we put them together we play at our best,” Ferrandez said. “Unfortunately, sometimes it doesn’t work out in our favor, but I thought my teammates and I gave it all we could.”

Goalkeeper Carson Davenport (‘22) talked about how his team went into the match focusing primarily on creating their own opportunities and limiting Dubuque’s scoring chances. However, Davenport recognized that numerous small mistakes throughout the game punished Luther on the scoreboard.

“I would say [Luther] followed the plan pretty well for about 60 minutes,” Davenport said. “As a goalkeeper, whenever you concede, you always feel you could have done better. But looking back at it, Dubuque scored some good goals, and I don’t really think there was much I could have done on any of them.”

The Norse finished their season 10-7-3, and ended their conference schedule ranked fourth in the ARC standings. Ferrandez identified Luther’s 4-0 win against Wartburg College in the first round of the playoffs as a highlight of the season, especially since the Norse had been winless in the five games leading up to the match.

“When our season was on the line against Wartburg, we came together to get a very big win, and it gave us a good boost mentally,” Ferrandez said. “It was a big game, but we knew that we have all played in big games before, so we should enjoy the moment and take advantage of the opportunity.”

For Davenport, a senior, this match concluded his five-year Luther soccer career. Davenport was on teams that made back-to-back trips to the NCAA Elite Eight in 2018 and 2019.

“Getting that far in the national tournament is really hard,” Davenport said. “I’m really proud to say I was a part of two teams that were able to do that.”