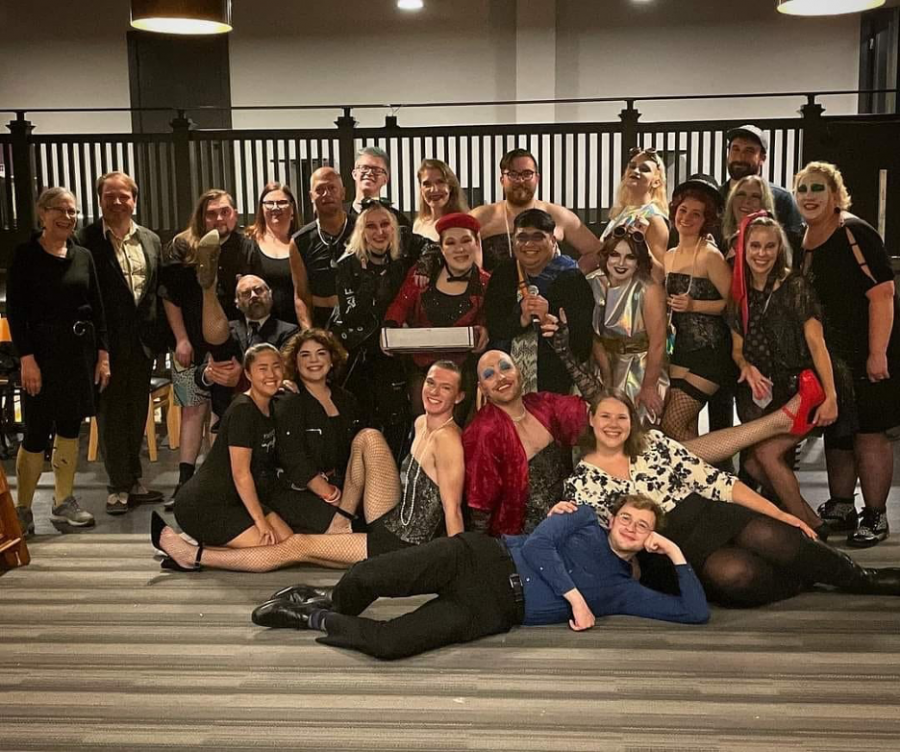 When Luther students Indigo Fish (‘22) and Elena Fackler (‘22) learned this summer that local theatre director and Luther alum Aaron Kvale (‘15) wanted to produce “The Rocky Horror Show”, they were ecstatic. Fish has been a long standing cast member with the New Minowa Players (NMP), the community theatre company based in Decorah. Fackler, on the other hand, has only recently become involved with the company. What the two theatre majors share is a deep appreciation for this show and what it embodies.

“It’s nice to see so many people who care about this show,” Fackler (‘22) said. “It’s an absolute honor to be involved in a production of Rocky Horror as it is an iconic show and huge part of queer history.”

The musical, which was adapted as a film in 1975, tells the tale of Brad Majors and Janet Weiss. The recently engaged couple’s misadventure on a stormy night forces them to seek help at the castle of Dr. Frank ‘n Furter, a mad alien scientist with an insatiable appetite for pleasure.

After selling out the three scheduled performances, the company added a late show that ran at 10:15 p.m. on Saturday evening, which also sold out soon thereafter. This will be NMP’s first live indoor theatre production since the pandemic began. They produced several outdoor performances this past summer, but Rocky Horror brought visitors back inside to a traditionally seated audience. Kvale shared what he hopes this production will do for audiences.

“I want people to enjoy a triumphant return to live theatre in a community setting,” Kvale said. “There is a spark of joy that this weird, bizarre musical can bring to people in a unique way that has endured over the past 50 years, [illustrated by] the strong cult following that it has accumulated.”

“We are able to keep up the tempo partially because of the Luther students who are involved,” Kvale said. “They bring a liveliness to the cast that enriches the dynamic. I’m always impressed by the unique skill set and diverse experiences that Luther students bring.”

A staple around Halloween time due to its comedic and edgy blend of sci-fi and horror, the production ran on November 5, 6, and 7 in the loft of Impact Coffeehouse with shows beginning at 7:30 p.m. Performers acted, sang, and danced their way around the audience, seated in the center and sides of the loft. Fish played Eddie, and was also a phantom in the ever-present ensemble along with Garza. Drilling portrayed Rocky, the muscle man that Frank ‘n Furter creates in his lab, while Fackler and Schlesinger portrayed Magenta and Riff Raff, Frank’s sibling servants.

One unique aspect of the “Rocky Horror Show” is the deeply cherished tradition of giving the audience free reign to heckle the cast. Audience members were given an unofficial script of remarks to use as a cheat sheet, but creativity and originality were also welcomed. The heckling added another layer of humor to the show while creating a unique and dynamic challenge for the cast. Fish said the show has pushed her out of her comfort zone, while also providing comic relief.

“The biggest challenge is the range that I cover,” Fish said. “Being in this production is a confidence boost, as it’s a show where you get to put everything out there. It’s especially fun being a phantom in the chorus while the leads are getting heckled.”

Growing up in Decorah, Fish recalls a close friend in high school encouraging her to try a production with NMP. In turn, she encouraged Fackler to try a show with NMP this summer, and Fackler enjoyed the experience so much that they were eager to return this fall for another production. Regarding their experience as a Luther student with NMP, Fackler expressed the value they see in this opportunity.

“It’s really cool that they are so open to new people coming in, which is not always the case with theatre,” Fackler said. “It’s great to venture outside the Luther bubble, try new things, and get to know members of the Decorah community.”

Another outlet for thespians on campus is Luther’s own Visual and Performing Arts Department. While the VPA is a wonderful option for students interested in being involved in theatre, NMP offers an alternative experience for those who are not majoring or minoring in the field. Having experience with both the VPA and NMP, Fish said everyone in community theatre shares unique values.

“No one is here because they have to be or need the credit,” Fish said. “They are here because they want to make time for theatre. It’s more relaxed as people come in with different levels of life and theatre experience, so it feels like we’re just coming together to make art.”