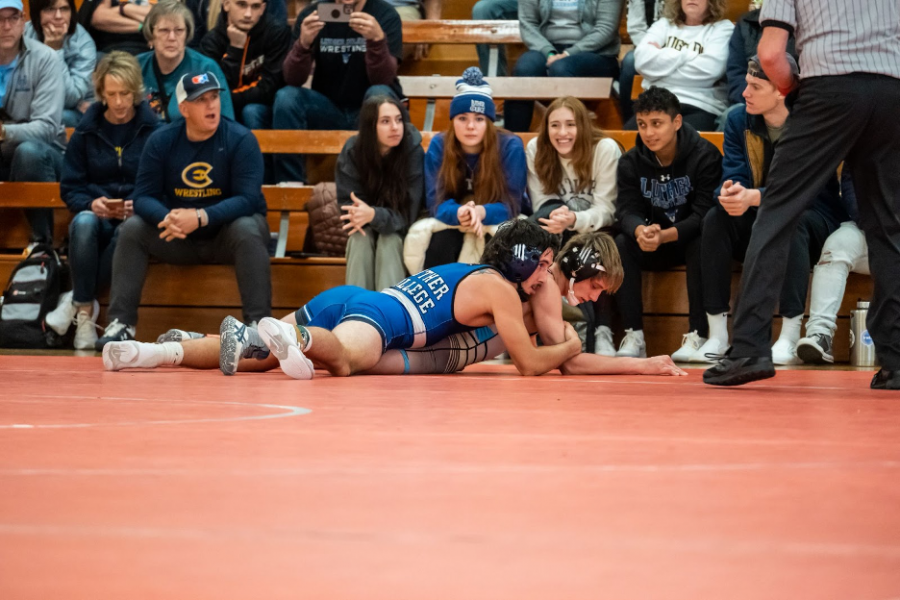 For their first official meet of the season, the Luther Wrestling team hosted the Luther Open on November 13. The Norse welcomed numerous wrestling teams from across the Midwest to Decorah, including the University of Iowa Hawkeyes, who are currently the top-ranked team in the NCAA Division I wrestling rankings. Three Luther wrestlers placed in the Elite Division: Logan Kennedy (‘22) placed second in the 285-lbs division, Jesse Martinez (‘23) placed fourth in the 133-lbs division, and 2020 National Wrestling Coaches Association All-American Donovan Corn (‘23) placed fifth in the 197-lbs division.

In the Silver Division, Walter West (’24) defeated Cullen Quick (’24) in the 285-lbs finals, and Ryan Cripe (‘24) wrestled the most matches in total, going 4-2 to place fifth in the 141-lbs division. West said he was really looking forward to competing for the first time with his teammates, and has already set goals for the rest of the season.

“In my matches I thought I did a good job of fighting the whole time and wrestling all 7 minutes,” West said. “As the wrestling season progresses I’d like to start scoring takedown points. I’d also like to qualify for nationals and become an All-American.”

In total, eight Norse wrestlers placed across the two divisions. Quick, who was barely beaten out for the 285-lbs title by West in a tiebreaker, said that he learned a lot about positioning and working his offense in his first collegiate competition.

“I was looking forward to the Luther Open, to really get an understanding of my progress and how I am developing as a collegiate athlete,” said Quick. “The main thing I need to work on is bringing my hips in on my leg attacks when on my feet.”

Luther Wrestling Head Coach Dave Mitchell was happy to have his team see first-hand what high-level collegiate wrestling looks like. In addition to the No. 1 ranked Iowa Hawkeyes, who have won 24 national titles and have six returning All-Americans on their roster, the Norse Open also featured top wrestlers from other midwestern schools. These teams included Upper Iowa University (a Division II school which has had wrestlers qualify for the NCAA Championships 15 seasons in a row) as well as Wartburg and Augsburg Colleges (who combined have won 27 NCAA titles at the Division III level). Mitchell thought the competition set the standard for the rest of the wrestling season.

“Our program is built around developing our guys,” Mitchell said. “We use the Luther Open as an opportunity to learn about ourselves as wrestlers and use that information to have a focused, specific approach to improving this next week and beyond.”

The Norse will next travel to Minneapolis, Minnesota on November 20 for the Augsburg University Invitational. The meet will start at 9 a.m.