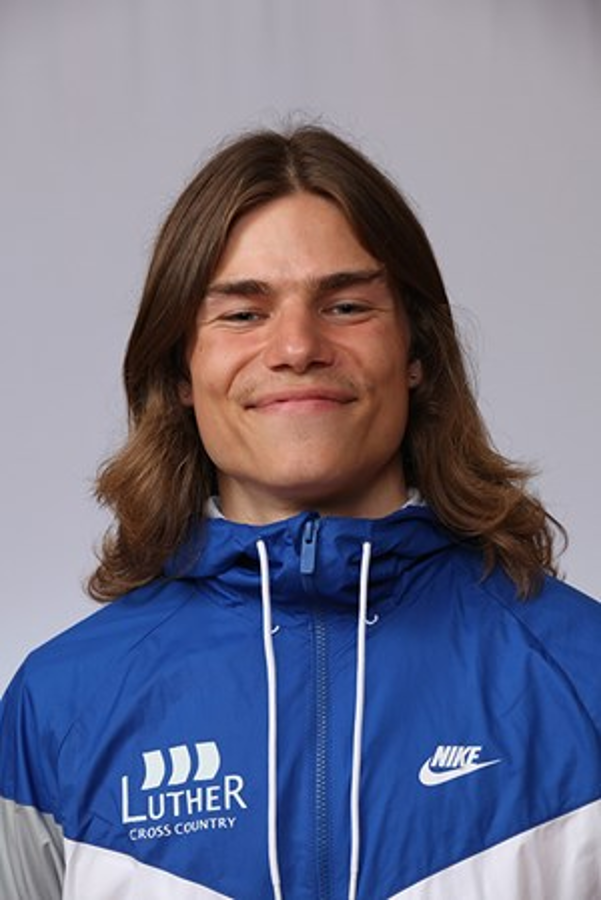 This past weekend, Tom Altier qualified for the NCAA 2021 Division III National Cross Country Championships. He finished 15th in the Midwest Regional with a time of 24:50.7, and was named an All-Region performer for finishing in the top 35. Altier earned these honors for the third time in his Luther career.

What do you love about running cross-country?

I think what I like the most is that I just enjoy running. It feels good to get out and run with your friends. There’s a really good team atmosphere. It’s a really tight-knit community of guys and we all really enjoy being with each other, every day; when you join the team you instantly have 30-some friends. I also like the competitive aspect of racing. I like trying to win and trying to run as fast as I can.

What drew you to Luther?

I think it looked like the perfect fit. I was planning on doing pre-med, at first, and I heard Luther is good with biology, chemistry and sciences. I wanted to do music, Luther was good with music. I wanted to run, and Luther was good at running, too. I’d also been here four times for summer music camp, and I liked the campus, the area and the people I met here. Luther seemed like it had everything I wanted.

How do you prepare for a cross-country race?

Ice baths; I’ll go to Twin Springs and sit in the cold springs for about 15 minutes, just to cool off the legs. It’s very therapeutic. I try not to run too hard the week of [a race], you don’t want to get tired. The night before, I will probably eat pasta. Nothing too adventurous the night before or the morning of. I try to keep a good attitude and not get worried about the race (like getting too nervous). If I have a good attitude and am having fun on the day of a race, that’s how I’ll race my best.

Did you always intend on being a college cross-country runner?

Early in high school I was definitely more passionate about music. As high school went on [and] once [running] became a really big part of my life, I knew I wanted to keep doing it. Eventually after my sophomore year of highschool, it was at my [cross-country team] banquet where I noticed all of the seniors that were leaving. Our team was going to be without all these guys, and people have to fill their shoes. That was a motivating thing for me: I want to be that positive role-model. Cross-country became a positive loop. I trained a little more, became more committed, then I ran better; then, I wanted to do even more, and running became more fun.

What does qualifying for the National Championship and earning All-Region honors mean to you?

It makes me really happy, obviously. It’s really great to know that my hard work is paying off. Since I’ve been at college, Nationals have always been my goal. Not only to go there, but to compete at a high level there. I’ve made it, I’m finally there; this is what I’ve been working towards and it’s a great feeling.

What is your goal for the National Championship race?

My main goal is to be an All-American, which is finishing in the top 40. I definitely have bigger aspirations than just top-40. I believe I can compete with the best out there and the goal is to do as best as I can. I will always give it my all and do the absolute best I can.

Who is someone you draw inspiration from and why?

My high school coach, Matt Jaschen. He’s one of the greatest people I’ve ever met. He’s super caring, and he’ll do anything for anyone. Being an athlete of this, he’s there for you; not for himself or for his own satisfaction, he’s there to teach people to love running and compete to the best of their ability. I learned a lot of really good life lessons from him. One of the most impactful things he’s done for me is making me believe that I can do anything. He showed me that if I set my mind to something, the sky’s the limit.

You are currently pursuing a double major in Mathematics and Computer Science. How do you balance this heavy combination with being on the cross-country team?

I enjoy what I do and try not to worry so much about anything. I also have a routine that I strictly follow and believe that it is all about positive attitude and self-discipline.

What are your plans related to cross-country running  in your future?

I will be running for [the Luther track team] in the spring since it excites me a little bit more than cross-country. Since I never used up my eligibility due to [the COVID-19 pandemic], I am thinking of coming back next fall for a fifth year to run on the cross-country team.